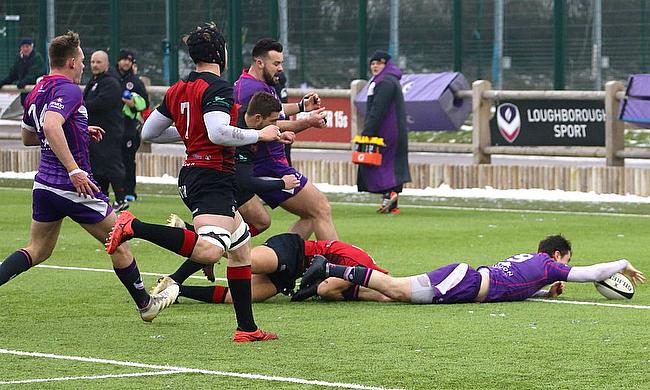 Old Albanian host Loughborough Students in National One this weekend with both sides aiming for a crucial victory in their respective battles for survival.

OAs have revitalised their hopes of staying in this division following back to back wins and those results have left them seven points from safety as things stand.

The team they are trying to hunt down are the Students who were able to move out of the bottom three despite losing to Birmingham Moseley in one of the few games which went ahead last weekend.

Another side that were able to play in Round 24 were Fylde, but their loss to the aforementioned OAs means they could be relegated when they take on Blackheath this Saturday

Due to the severe weather which hit the country last week, the majority of teams in National One are returning to action in Round 25 with the likes of Coventry hoping to edge closer towards promotion when they host Old Elthamians.

It was an impressive performance by Coventry last time out. Director of Rugby Rowland Winter told the club’s website it was “the best yet” as the league leaders edged closer to promotion from National One following a dominant display away at second placed Darlington Mowden Park. The Midlands side are now 26 points clear at the summit following their victory two weeks ago and with seven games left to play; it is now a matter of when, not if Coventry will lift the title.

Andy Brown will become a #covrugby centurion ? on home turf tomorrow against @ElthamiansRFC. @Pah_Ryan8 will also make his first full debut in the back row #COVvOES #BeThere #Nat1

The Championship awaits Cov, but a side which is more than content with life in National One are Old Elthamians. Gavin Lach’s men have enjoyed a wonderful season in the third tier after clinching promotion 10 months ago and currently, they sit sixth in the table. Two excellent recent victories against Rosslyn Park and Plymouth Albion leaves OEs with a great chance of finishing in the top five and they travel to the league leaders having won five of their last seven matches. OEs ran the champions elect very close in the reverse fixture earlier in the campaign and a similar performance this weekend would just add to their brilliant campaign.

After a weather affected weekend last Saturday, Darlington Mowden Park will be itching for a response in Round 25 when they travel to Rosslyn Park. Danny Brown’s men were simply outplayed by Coventry two weeks ago which saw their 100 per cent home record come to an end and any slim promotion hopes dashed. DMP now have to put all their energy into finishing in second spot because after back to back defeats, they are only six points clear of Plymouth Albion, who also have a game in hand.

As for Rosslyn Park, they were in limbo right up until last Saturday morning, but eventually their fixture with third placed Plymouth Albion was called off. It doesn’t get any easier for Kieran Power’s men this weekend as they welcome DMP to the Rock, but they will be aiming to improve upon a run of just one win from their last five matches. Park are only eight points clear of the relegation zone despite sitting in 10th place so a positive result this Saturday could create some vital breathing space between themselves and the battle for survival.

Fourth hosts third in National One this weekend as Ampthill and District welcome Plymouth Albion to Dillingham Park. The visitors did everything possible to get their fixture on against Rosslyn Park last week, but unfortunately the pitch was deemed unplayable leading to a third home postponement  in 2018 for Albion. But, their focus now must turn to their travels and last time out, Kieran Hallet’s side found a way to win against Birmingham Moseley to leave them just six points off second placed Darlington Mowden Park.

Despite their triumph at Billesley Common, Plymouth have been patchy away from home and three wins from their last eight fixtures does highlight this so Ampthill will be aiming to show their authority on their own turf this weekend. The A’s come into this clash having not played since February 17th but in that game, they produced a much improved performance against Caldy. Head coach Paul Turner told the club’s website he was pleased by their display three weeks ago and it keeps the A’s in with a chance of finishing second this term. They have lost just one of their last nine matches and if they can improve on that record this Saturday, then they will move back into the top three above Albion.

After two weeks off, fifth placed Blackheath are back in action this Saturday as they welcome Fylde to Well Hall. In their last fixture, ‘Club’ clinched a last-gasp victory against Esher and they will be hoping to build upon that result this Saturday. James Shanahan’s side left it late to seal their 14th win of the campaign and the victory means that Blackheath are very much on course to better their achievements of last season. Just one more win would see them surpass their points total from 2016/17 and a top five finish looks to be the aim for the London based-side.

Whilst Blackheath are aiming for a strong end to the season, Fylde’s time in this division looks to be nearing its end. Head coach Warren Spragg told us that his side are already planning for next year and they will almost certainly be playing in National Two North following a 31-21 defeat against rivals Old Albanian last Saturday. The loss means Fylde remain 26 points from safety with six games left to play so if they fail to better or match 13th placed Loughborough Students’ result this Saturday, then the Lancashire club will be relegated. There is no doubt that this young squad will keep fighting, but it is a battle which they have almost lost.

This week, Birmingham Moseley’s Ciaran Moore told the Birmingham Mail his side were “pretty annoyed” that their fixture with Loughborough Students went ahead last Saturday. Due to the severe weather in the Midlands, the Moseley players faced travel disruption, but in the end, their irritation turned into jubilation. Moore was one of the try scorers as Moseley produced a stirring comeback to defeat the Students and after just one defeat in their last five matches, Richard Protherough’s side are on course for a strong finish to the campaign.

Next up for Moseley is the visit of Cambridge who will be eager to return to action this Saturday. In their last fixture at the end of February, Ross Stewart’s side were left to rue missed opportunities as they fell to a defeat at home to Caldy. After dominating territory in the first period at Volac Park, the Blood and Sand couldn’t convert their pressure into points and ultimately it cost them. However, after flirting with relegation last year, Cambridge are having a really positive season this term and they may have their sights set on a top half finish as they currently occupy 12th in the table.

It has certainly been a season of progression for Bishop’s Stortford. After being crowned champions of National Two South last year, Andy Long’s men have hardly looked back as they currently sit in the top half of the third tier with two months left in the season. However, Stortford have won on just one occasion in 2018 which is something they will be eager to put right this weekend when they travel to Esher and after beating their hosts 24-17 back in November, Stortford will be aiming for a similar result on the road.

So, with the visitors going through a tough spell of form, Esher may feel as though they can return to winning ways this weekend. After their postponement at Darlington Mowden Park last Saturday due to the ‘Beast from the East’ affecting the country, the Surrey-based side will be keen to return to action after a narrow loss to Blackheath last time out. Esher were so close to their first away victory of the season at Well Hall, but now they are back at Molesey Road where they are unbeaten in three matches and with them sitting just eight points clear of the drop, another home triumph would be most welcome for Ricky Nebbett’s side.

Two recent National Two North champions meet in Yorkshire this weekend as Caldy take the trip to Hull Ionians. Following the cancellation of their fixture with Coventry, the away side will be glad to be back in action this Saturday as they look to continue their excellent season. Having sealed promotion to the third tier for the first time in the club’s history last April, Simon Verbickas’ side have maintained their progression and they are full value for their ninth placed position in the table. Caldy are currently going through a purple patch in form having won six of their last nine matches and after a victory over Cambridge in their last away outing, they will be aiming to replicate that result against Hull Ionians.

The I’s welcome Caldy to Brantingham Park in a positive mood despite slipping back into the bottom three last weekend. Hull weren’t in action due to the postponement of their fixture against Cambridge, but relegation rivals Loughborough Students did play and they only managed to pick up two points at home to Birmingham Moseley. It means Hull Ionians and 13th placed Students are level on 44 points having played the same amount of matches and with Hull unbeaten in their last three games, they will keen to keep their momentum going as they look to move out of the drop zone once again.

Loughborough Students coach Gerard Mullen admits his side switched off in key moments which led to their defeat against Birmingham Moseley last weekend. The Students did move out of the bottom three as they picked up two bonus-points, but now they come into a huge fixture with Old Albanian and Mullen knows his squad have to be better at this crucial stage in the season.

As things stand, Loughborough are level on points with 14th placed Hull Ionians, but victory over a relegation rival this weekend would move them further away from danger. Their hosts, Old Albanian, gave themselves a shot in the arm last Saturday as a vital victory over Fylde now leaves them seven points from safety. After also beating Bishop’s Stortford, a third win on the spin for Gavin Hogg’s side would give them real chance of avoiding the drop.