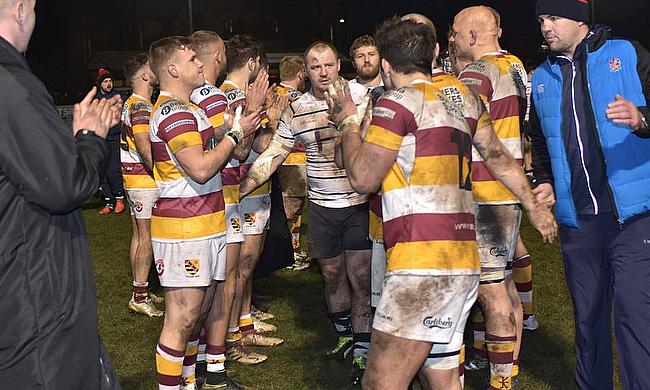 Fylde and Preston meet at Woodlands on the second weekend of the National Two North campaign in milestone seasons for both clubs.Photo Credit: (Chris Farrow)

The history of Fylde against Preston Grasshoppers sparked into life again last season.

A fierce rivalry was in a dormant state for seven years as both clubs plied their trade in separate divisions, but the Lancashire and National League community had one of its most iconic fixtures back on the calendar in 2018/19.

Those seeking an introduction to the Fylde and Preston Grasshoppers story could start by looking at the two games played between the sides last term. Together, they encompassed the spirit and desire of both teams and the matches provided a snapshot of the overall rivalry which was an underlying theme across the course of the National Two North campaign.

Just over a year ago, the clubs met for the first time since 2011 and Preston claimed the bragging rights at Lightfoot Green. After promotion from North Premier, Hoppers announced themselves back in the fourth tier with an 18-15 derby day win which was a standout result in a very positive term for Paul Arnold’s side.

As Joe Harvey mention in his feature for the NCA website before that specific fixture, Fylde against Preston was traditionally a Boxing Day game which began in 1921 and last Christmas, both teams served up another cracker. It was Fylde who were full of festive cheer after the second meeting of the season following a 33-17 victory at Woodlands and by the end of the campaign, only one place and three points separated the teams.

They may not have admitted it, but Preston would have been keen to finish above their old foes and this term, Hoppers will be hoping to challenge Fylde once again in what is a very special season for both clubs. 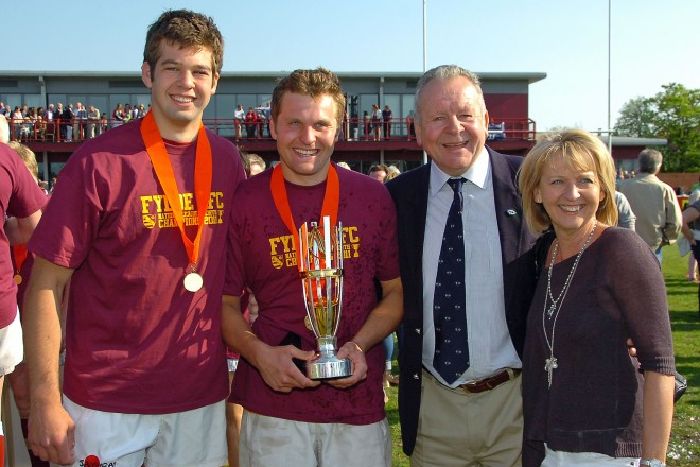 The Beaumont’s celebrate Fylde’s promotion in 2010-11 to National One. Photo CreditL Fylde RFC

This weekend, Fylde and Preston will meet for the 17th time since the millennium with the former celebrating it’s centenary year and Hoppers their 150th anniversary.

Both teams have very rich histories with Fylde’s most notable connection being with Chairman of World Rugby, Bill Beaumont. The former England player and British and Irish Lion is a legend at Woodlands having been affiliated with the club since he was 17-years-old and the Beaumont name is synonymous with the club.

Beaumont’s three sons – Danny, Sam and Josh – have all represented the club with the latter now at Sale Sharks in the Gallagher Premiership. Josh also captained England this summer against the Barbarians at Twickenham and he cannot speak highly enough of where his career first began.

“It is a huge milestone for Fylde,” he said. For any club to reach 100 years is great so it should be such a great year for Fylde. There are lots of good events that are going to be put on. I know they have got the Barbarians coming at the end of the season so that will be the main event to finish off this special year.

“Fylde have also got a good squad of players and they have not lost many from last year. They did pretty well in National Two North so I hope they can get promoted back to National One.

“It is great to have the local derby. Fylde v Hoppers are always good occasions with the big crowds which is important for the community to bring in that revenue, but also it creates that buzz in the North-West rugby scene.

“I am actually going this weekend to watch so I am hoping it is a Fylde win! My Dad is off to Japan for the World Cup so I am sure he will be keeping an eye out for the result!”

Beaumont is not the only current Premiership player to have played at Woodlands. Richard Wigglesworth (Saracens), Christian Day (ex-Sale and Northampton) and Kieran Brookes (Wasps) are just three other examples and the latter was also glowing about his time at Fylde.

“As a young player coming through, I think game time is the most important thing,” Brookes told ncarugby.com. “The experience I got through the lower leagues, especially at Fylde before I went up to Newcastle, was massive.

“Playing against some old heads who have been in the game for 10-12 years and scrummaging against them was a learning curve, but also playing with lads who may have experienced the Premiership or Championship who were dropping down helped because they were able to filter their knowledge through as well.”

Fourteen miles up the road, there are also some standout names who have represented Preston in the past. With it being the club’s 150th year anniversary, both Will Greenwood & Steve Borthwick sent tribute videos to Hoppers at the start of the season whilst ex-pros such as Paul Grayson have pulled on the white jersey at Lightfoot Green.

A surname which also stands out at Preston is ‘Haley’. Ireland international and former Sale Shark, Mike, featured for Hoppers before climbing the rugby pyramid, but his father Tim, has been associated with the club for 41 years after moving to Preston for university.

“I first came down to club on the first Tuesday I could when I moved here,” Haley said. “I played a bit of rugby for the Poly [university] and came up to the club with a bit of a legend here, Dave Percy. He went on to play about 500 games for the first team at scrum-half.

“I found my way to the bus stop, not knowing where I was going and Dave was there and that was the start of the association as an 18-year-old.

“The club has got a long, long history. There are some great rugby players who have come through here and if you put all of those names together who have gone on to Premiership clubs and internationals, they started here with some wonderful people.”

“It is such a community club and it has always been supported well. They have got the 1869 club now. It is the older guys who used to play rugby and they love getting the coach and having the meal beforehand, but they really support the first team. I think the first team really appreciate it. There is a real good feeling within the club and you particularly see it on matchdays.”

The 1869 club will be heading to Woodlands on Saturday to show their support to the current Preston squad led by former Fylde player and head coach, Paul Arnold. Arnold spent seven years at Fylde before moving to Lightfoot Green two years ago and since his switch to Hoppers, the club have continued to take significant steps forward.

He called time on his playing career at the end of last season having appeared in 450 National League games and Arnold admits being a part of Fylde vs Preston fixtures are special occasions.

“It was great last year,” Arnold told the NCA Rugby Podcast. “We had 3,000 down here [Lightfoot Green] and had the same at Fylde around Christmas. It is just great for North-West rugby. We need us all doing well. There is obviously the rivalry between the clubs and I know both clubs very well, but these are the games you want to be involved in.

“As a player, these are the games you should be getting up for and I shouldn’t have to do much talking.”

It is not just Arnold who has switched between Fylde and Preston over the years. Current Hoppers Matt Lamprey, Peter Altham, Oli Trippier, Toby Harrison and Jordan Dorrington are all former members of the Woodlands parish whilst Fylde’s Connor Wilkinson and Tom Grimes are products of Preston’s youth system.

Preston travel to Fylde this weekend seeking a first win at the home of their rivals for 18 years. Hoppers will also be keen to bounce back from their 30-10 opening day to defeat to Sedgley Park whilst Fylde currently sit at the summit of the embryonic National Two North table after beating newly promoted Scunthorpe 52-32 in Round One.

The latest paragraph is ready to penned in the history of these two famous clubs, but who will take the spoils from the first Fylde v Preston contest of the new season?