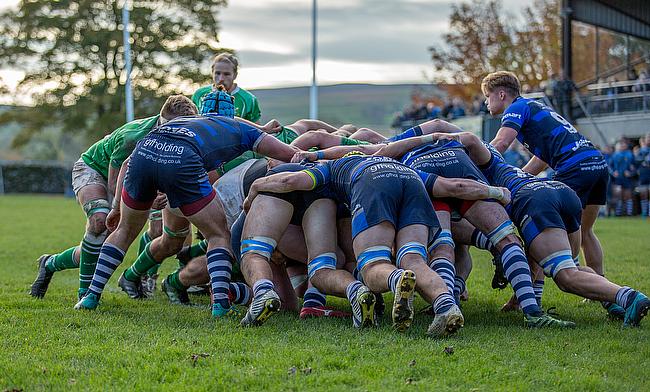 National Two North league leaders Hull Ionians were on the verge of successive defeats, but two late tries against Macclesfield saw them rescue a victory.

The I’s lost to Preston Grasshoppers in Round 13 and it looked as though Macc were going to become the first side to beat Hull Ionians at Brantingham Park this season, but the Yorkshire outfit managed to find the answers.

Hull are now four points clear at the summit after second placed Chester defeated Sedgley Park while for Macclesfield, they are 10 points off safety after this narrow defeat.

Elsewhere in National Two North, Hinckley continue to hunt down the top two following a home win over Leicester Lions, Preston Grasshoppers clinched their first away triumph at Stourbridge, Wharfedale beat Tynedale and Chris Johnson snatched a draw for Huddersfield at Fylde.

The score was 6-5 at half-time, courtesy of a drop-goal by Morgan Bunting and penalty from Lewis Minikin, while Myles Hall darted over for the visitors.

Tom Morton was then the star of the show for Macc in the second half as he converted his own score and landed a penalty to put the Blues 16-6 up heading into the final 10 minutes.

Macclesfield, who currently find themselves in the bottom three, were edging towards a superb victory at Brantingham Park, but Hull produced a remarkable fightback.

Samuel Rees crossed late on to cut Macc’s lead to three points before the home side snatched the victory right at the death when Minikin touched down.

Chester ground out a vital win over a strong Sedgley Park side to maintain their position in the top two of National Two North.

Leon Simpson and Nathan Rushton both crossed in the final five minutes of the first half to give Sedge a 12-0 lead.

However, Chester produced a reaction after the restart as Richard Cotterill and Alick Croft touched down to put the hosts in front.

Hinckley clinched their eight successive home victory of the season, but they had to come from behind to beat local rivals Leicester Lions.

Alex Smit gave the Lions the lead and quick-fire scores from Edward Sumpter and Devon Constant put the away side 19-0 up after only 11 minutes.

But, Hinckley hit back before the interval thanks to a brace from Joe Glover while a penalty try shortly after half-time cut Leicester Lions’ lead to just two points.

The decisive score then came on 67 minutes as the experienced Scott Hamilton dotted down to ultimately seal the win for George Chuter’s side.

Fylde were unable to extend their winning run to five matches as Huddersfield fought back to earn a draw at Woodlands.

Tries from Alex Battye and Chris Johnson helped Field into a 17-10 half-time lead, with Connor Wilkinson crossing for Fylde and Greg Smith also landing a penalty.

The same combination of a Wilkinson try and a Smith kick put Fylde in front heading into the final 10 minutes, but they were to be denied as Johnson pinged over his second penalty of the afternoon to snatch a share of the spoils for the visitors.

Nolson scored for the Yorkshire side after 20 minutes, but South levelled the game up as Joe Lane touched down before half-time.

It was first blood to Otley after the restart as Dunn went over to put the visitors back in front, but Ben Palmer’s penalty kept South in the game heading into the final quarter.

However, the home side could not find the decisive score as Otley held on for their sixth victory from their last seven games while South remain in the bottom three.

Preston Grasshoppers sealed their first away victory over the season as they beat Stourbridge, despite ending the game with 14-men.

Tries from Sam Stott, Matt Lamprey and Conor Trueman helped the visitors into a 21-14 half-time lead, while Jack Lea and Mark George responded for Stour.

Incredible performance from Hoppers to hang on at Stourton Park with 14 men to secure a 38-32 bonus point win! Up the Hoppers! pic.twitter.com/KQcgwnzYnD

A penalty from Rickie Aley cut the deficit to four points, but Matt Crow’s try kept the Hoppers in control.

However, two tries in six minutes from Mark Harrison and Joe Heatley gave the home side a 29-26 lead, but once again, there was another twist at Stourton Park.

Preston went over in quick succession as James Gough and Tyler Spence both dotted down to give Hoppers an 11-point lead, but Stott was then shown a red-card to give Stour a glimmer of hope with a few minutes remaining

Aley nudged over a penalty but it proved too little, too late for the hosts as Preston held on for another excellent win.

A penalty try and a score from Sam Gaudie helped Wharfedale end a run of three straight defeats as they beat Tynedale in testing weather conditions at the Avenue.

A tight first half saw the hosts open up a 13-0 advantage thanks to a penalty try and two kicks from the boot of Jack Blakeney-Edwards.

Tynedale scored the first points after the break through Rob Palmer, but the hosts ultimately wrapped up the win when Gaudie crossed on 50 minutes.

In a dramatic second-half, a brace from Tom Lewis – to add to Allen Carr’s earlier score – kickstarted the Lions revival.

Tries from Ryan Holmes, Greg Mellor and Pete Swatkins (2) had put the visitors in complete control after 50 minutes, but the division’s bottom club produced a remarkable fightback to clinch their third win of the campaign, which leaves them 11 points off safety.