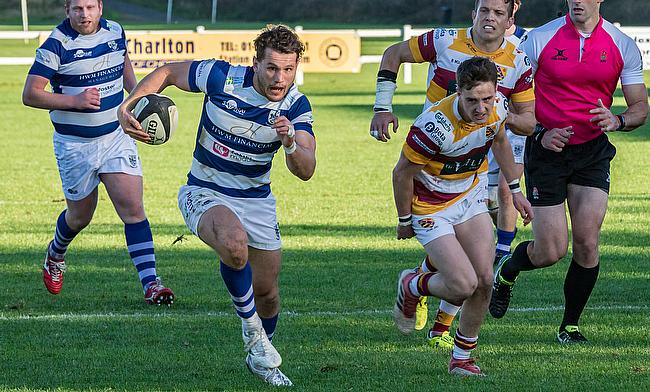 Four teams entered Round Six aiming to secure their first victories of the campaign and they all succeeded in National Two North.

Tynedale thrashed Fylde at home to kick start their season while Leicester Lions performed superbly to beat possible promotion candidates Sedgley Park. As for Macclesfield and Peterborough Lions, the Blues came from behind to beat Otley and the Lions ended Chester’s winning start to the term.

At the top of the table, Hinckley were able to extend their unbeaten run to six matches with a victory over South Leicester while there were also wins for Hull Ionians, Huddersfield and Wharfedale.

Lamb’s brace came in the first half and he was joined across the whitewash by Joe Wilson as Hinckley led 21-17 at the break.

Daniel Ireland and Mitchelle Stephenson crossed for South, but the visitors could not increase their tally after the interval as the league leaders went through the gears.

Turner grabbed his double in the space of seven second half minutes before replacement Benjamin Pointon went over to seal another win for George Chuter’s side.

Hull Ionians recovered from a slow start against Stourbridge to maintain their wonderful home record in National Two North and climb to second place in the division.

The I’s ran in five tries against Stour to extend their winning record to 19 matches at Brantingham Park at this level.

Scores from Jack Lea and Sam Montieri gave the visitors the perfect start in Yorkshire, but tries via Mark Wigham, Sam Wilson and Ben Stephenson gave the home side a 19-14 lead at the interval.

James Newman increased Hull’s advantage after the break, but Lea’s second try for Stour kept the Midlands side in touch.

However, a penalty from Lewis Minikin and another Wilson score helped Hull Ionians over the line.

Leicester Lions secured their first victory over the season thanks to a superb bonus-point win over Sedgley Park in the Midlands.

Great win for the boys today 32-14. Didn’t get everything right in the 1st half but 25 unanswered second half points gave the Lions their win of the season.

Ollie Glasse and Tom Bedlow tries saw Sedge lead 14-7 at the break after Devon Constant had given the Lions the lead on eight minutes.

However, the home side scored four unanswered tries to end a 12-match losing streak as Aaron Martin, Alex Wilcockson (2) and Max Titchener all crossed to hand the Lions a much-needed victory.

Huddersfield powered to a convincing victory over Sheffield Tigers to move up to fourth place in National Two North.

Field, who entered this game on the back of three straight wins, ran in five tries to defeat their Yorkshire compatriots at Dore Moor.

The game was level at the break as a try from Harry Whitfield plus a penalty via Will Milner were both cancelled out by Greg Mellor and Pete Swatkins.

However, Field took control after the restart and scores from Lewis Workman, Matthew Dunn, Mark Pease and Elliot Knight wrapped up the win for Gareth Lewis’s men.

Peterborough Lions clinched their first ever victory in National Two North and they also ended Chester’s winning start to the season.

Tries from Alick Croft and George Baxter put Chester 10-3 up heading into the second-half, with Ben Young slotting over a penalty for the Lions.

Aki Lea and Jake Carter both received yellow cards, but Peterborough Lions weathered the storm and responded when they were back to a full complement of players.

Lea returned from the sin-bin to score and with three minutes to play, the Lions sealed their maiden win at this level as Young scooted under the posts.

Tynedale sealed their opening triumph of the National Two North season with an efficient victory over Fylde at Corbridge.

After a tough week for Tyne, Ben Woods’s side produced an outstanding performance against possible promotion candidates Fylde to kick start their campaign.

The aforementioned Passman grabbed his second after the restart before Guy Pike scored a nine-minute hat-trick to put the icing on the cake for Tyne.

The highlights for Fylde were a first-minute try from Tom Carleton and a score from Ben Gregory after the interval, but this was a tough outing for the Lancashire outfit.

Superb displays from backs Rian Hamilton and Jack Blakeney-Edwards helped Wharfedale return to winning ways as they beat Preston Grasshoppers at the Avenue.

A brace from Hamilton and 10 points via the boot of Blakeney-Edwards helped make it 20-17 to Dale at half-time, with tries from Tyler Spence (2) and Edward Leatherbarrow keeping the Hoppers very much in this contest.

Ken Houghton and Alex Ward exchanged scores after the break, but Hamilton’s hat-trick and a further try from Rhys Lovegrove saw Wharfedale clinch the victory.

Macclesfield picked up their first victory of the National Two North season thanks to an excellent win against Otley.

It wasn’t straightforward for Macc, though, as the Cheshire side had to battle back from 15-0 down after Jack Mackie, Adam Malthouse and George Burkinshaw had all crossed for Otley inside the opening quarter.

This is the moment Macc secured the game against @OtleyRugby – The highlights will be out on Facebook later today but you can see them on #maccrugbytv at YouTube now via this link https://t.co/KeMxHUKXBP #maccrugby #maccrugbyclub #oneclub #macclesfield pic.twitter.com/EuyNIP0mpt

The home side responded with two tries of their own through Myles Hall and Jordan Simpson, either side of Ben Magee’s effort, as they trailed 22-12 at the break.

However, Otley failed to increase their advantage and the Blues turned the game around with three unanswered tries via Dan Lomax, Sam Parry and Jordan Davies to seal a welcome win for the Cheshire club.