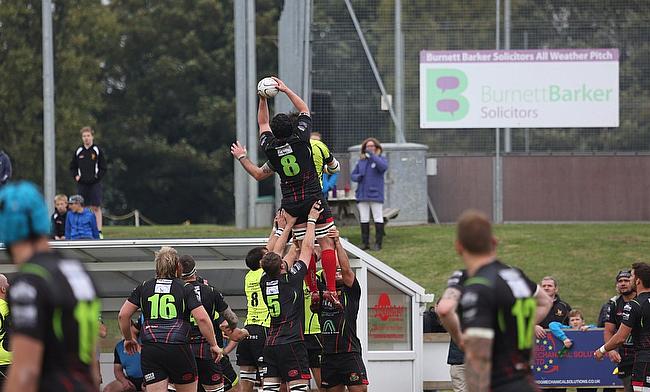 The top three sides in National Two South are separated by just two points at this early stage of the campaign and each team face potential ‘banana skins’ away from home in Round Six.

League leaders Rams RFC travel to newly promoted Barnes and second placed Taunton Titans go to a London Irish Wild Geese side who are desperate for a victory while Redruth take the long trip to the Midlands to face a growing Birmingham and Solihull outfit.

Three years ago, Rams RFC and Barnes were promoted into National Two South and both have their own stories to tell since 2015. For the Rams, they have continued to take steps forward and after finishing third last term, Seb Reynolds’s men returned to the summit of the division in Round Five after an impressive win over Bury St Edmunds.

What a awesome game @Rams_RFC vs @BSERugby ????Have a safe journey home Bury St Edmunds and good luck for your next game.??

The Berkshire club have won four out of their first five games, whilst Barnes have suffered contrasting fortunes. The London club were relegated from National Two South in 2017, but responded immediately by gaining promotion back into the fourth-tier. Joe Gray’s men began their return to this level with a cracking win over London Irish Wild Geese, but since then, they have suffered four straight losses. Rams RFC will be favourites to make a winning start to October, but can Barnes upset the applecart?

Tony Yapp’s side had to dig deep to see off Canterbury last weekend and form suggests they will be in for a more comfortable afternoon when they take on London Irish Wild Geese on Saturday. Wild Geese will certainly have something to say about that, but they have lost all five of their fixtures so far including defeats against three of the current bottom seven. A positive for Lee Starling’s men to take into this fixture is the fact that they beat Taunton 45-38 in this corresponding match last November and they could really do with a similar result this time around to kick start their season.

Following a narrow victory over Guernsey in Round Four, it was all guns blazing for Redruth last weekend as they racked up 50 points to beat Clifton at the Recreation Ground. The Reds enter the second month of the season just two points off the promotion places and after some strong campaigns by Pale Nonu’s side in recent times, could this be the year they break into the top two?

Hoping to hamper their ambitions will be Birmingham and Solihull in Round Six. The newly-promoted Bees always knew coming into National Two South would be tough especially after they were deducted five points at the beginning of the season following a breach of player rules last term. As things stand, they currently sit in the bottom three but they have shown encouraging signs that they can dig themselves out of trouble and the Portway faithful will be hoping for a second victory of the campaign this weekend.

Last weekend, both Bury St Edmunds and Tonbridge Juddians were involved in the series of fixtures between the top six, but they suffered contrasting fortunes. For TJs, they picked up an excellent victory over Old Albanian which lifted them to fourth in the table as they secured their third win on the spin.

Confidence amongst Peter Dankett’s men will be high when they head to Suffolk this Saturday and Bury St Edmunds will be wanting an immediate reaction when TJs come to town. Bury fell to a defeat against Rams RFC which ended their three-game winning streak and after entering last weekend sitting third in the table, the Wolfpack are now ninth. However, a victory for Jon Curry’s men could see them leapfrog Tonbridge Juddians, which highlights just how tight National Two South already is.

Canterbury were inches away from making it four consecutive victories in Round Five. The City Men missed a late kick against Taunton Titans which condemned them to defeat in Somerset, but Andy Pratt’s side will take a lot of positives out of the performance. The Kent outfit now need to harness those plus points and carry them into their first fixture of October as they look to continue their positive start to the new season.

Worthing Raiders are the visitors to the Marine Travel Ground this weekend and Jody Levett’s side will be looking to build on a victory over Birmingham and Solihull last time out. The Raiders scored 51 points against the Midlands club, but Levett admitted after the game, that his players were frustrated with themselves after allowing the Bees back into the contest at one stage. The bigger picture for Worthing is the fact that they have won three of their last four matches and the sixth-place side will looking to add to that record this Saturday.

In Round Five, Henley Hawks returned to winning ways as they comfortably beat Old Redcliffians away from home. Nigel Dudding’s side would have been pleased to end September in a positive fashion after successive defeats had slightly taken the shine off their season. However, the Hawks responded and they will be aiming to kick-off October the same way they did September, by securing a victory.

.@HenleyHawks were also back to winning ways in National League 2 South, beating Old Redcliffians 31-15, thanks to two tries from Tom Emery https://t.co/V1EXoEnset

They entertain Dings Crusaders this weekend and the newly promoted side will be delighted with the way they have begun life back in National Two South. Three victories from their last four games means Luke Arscott’s side head into the second month of the season in 10th place and they will hope their form in September isn’t a flash in the pan when they visit Dry Leas in Round Six.

Old Albanian were relegated from National One back in April after a two-year stint at that level, but life back in National Two South hasn’t been a breeze thus far. Gavin Hogg’s side lie eighth in the table after five rounds and they are struggling to find some early consistency which is key if they stand any chance of challenging for an immediate promotion.

After a superb win over current table toppers Rams RFC two weeks ago, OAs lost to Tonbridge Juddians last Saturday so they will be itching for a reaction when Old Redcliffians visit Woollams. The away side come into this contest looking to bounce back themselves after a home defeat to Henley Hawks last time out. Old Reds spent most of 2017/18 fighting for survival and it looks as though they might have to prepare themselves for another relegation battle after winning just one of their opening five games. However, the Bristol-based side did win their last away fixture so they will be hoping for another successful trip on the road.

Guernsey against Clifton is the final match of the National League weekend with the game kicking off at 6pm on Saturday evening. Clifton travel to the Channel Island aiming to take the positives out of their 50-36 defeat to Redruth in Round Five. The Lavender and Blacks begun the contest on the front foot to go 17-3 up, but conceded five unanswered tries which ultimately cost them the match.

Matt Salter’s men currently lie 11th in the table after two wins from their first five matches and they visit a Guernsey side who would have been delighted to get off the mark last weekend. The Raiders secured their first ever victory in National Two South as they beat Barnes away from home and now Jordan Reynolds’s side will be keen to translate that display into a cracking home performance under the lights at Footes Lane.