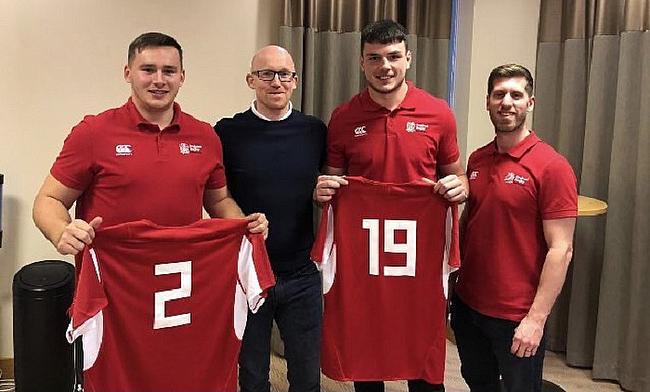 Matt Gallagher has lifted the lid on the emotions he felt when he was called-up to represent England Counties U20s this summer.  Photo Credit: (England Rugby North U20s)

The Sedgley Park forward revealed he wasn’t initially selected for the North U20s trials, but when he was handed the opportunity, it was one he grasped with both hands.

After impressing for his county side Lancashire, as well as in the trials, Gallagher then had a nervous wait to find out if he had made the squad for their tour of Romania.

“It [the call-up] came about from me representing Lancashire,” Gallagher told ncarugby.com

“From our matches against Yorkshire and Cheshire, I was invited for North trials. Originally, I wasn’t selected for the North trials and only got a call-up because of an injury to another player.

“I made that and at the North divisional weekend, we played Midlands and South-West and three days after that, we got a letter through the post informing us we have been selected. I literally spent that full day waiting for the postman and I was just so happy and excited!”

This was Gallagher’s first experience with the Counties U20s and it was a tour he won’t be forgetting in a hurry. As well as England securing two excellent wins over Romania U23s, the forward also scored in both Tests which was the perfect way to round off an excellent season for the Sedge man.

“It [the experience] was insane,” said Lancashire U20s’ Player of the Year. “To go from National League standard and county standard straight into training everyday with England Counties U20s with a new bunch of lads who were all great, was amazing.

“Representing your country is something I have dreamed of since I started rugby aged six so it was unbelievable.

“In the changing room before that first Test it was nervous! Walking out side-by-side with the other team and setting up for the anthem was when the emotions take over. Singing that anthem fills you with pride and it makes you feel like you have done all your family proud.

“To then score on debut and then to follow it up with a second try in the second Test was a great feeling. It was nice to get both, especially as a front row player!”

Whilst it was a successful few weeks for Gallagher on a personal note, it was also a pleasing tour for new coaches Steve Salvin and Lou Meadows.

Last summer, they came away with a 2-0 series win and Gallagher admits the recent success of the U20s programme did provide the class of 2019 with motivation.

“The year before, I think the guys had gone two unbeaten Tests in Georgia so it was boots to fill as well!” he said.

“We didn’t want to let the country down overseas. We just wanted to come back with the two wins and that was quite a lot of motivation for the lads against a tough opposition.

Good luck to the @EngCounties20s for their test matches against Romania this week.!! 👌👌✊👊🏼

During their tour, Counties U20s were sent messages of support on social media including a few from current Wasps stars Brad Shields, Lima Sopoaga and Jack Willis.

The squad also received a special video from former England international James Haskell and Gallagher feels the messages highlight the importance of the Counties programme.

He added: “The support was crazy. Before the second Test, they showed us a video from James Haskell. It was an insane feeling that he took time out of the day to send it over and wish us well.

“He has done it on the biggest stage at Twickenham and represented England at World Cups so for him to take the time out to support the young lads coming through in the Counties system is great.

“It is a great pathway. I think it’s very suited to me because I am at Manchester Met University at the minute so the pathway I have, is allowing me to get my studies done whilst still enjoying rugby and playing at a high standard.”

Gallagher is continuing to learn his trade at a ‘high standard’ with both a flourishing Manchester Met side and National Two North outfit Sedgley Park.

He joined Sedge back in 2017, but Gallagher revealed when he arrived at the club, he was a centre rather than a hooker.

Over the last two seasons, he has made the transition into the front-row and after tasting more first team rugby in 2018/19, Gallagher has clear goals for the new campaign which begins in September.

Huge congratulations to Matt Gallagher being selected for England Counties U20s tour of Romania. Well done and can’t wait see what you can bring next year. #tigers

“Since joining the club, I have moved into the hooker position. I was a centre so it was a big change, but the club have been so supportive,” he added.

“Working with the likes of Johnny Rodham, an ex-professional, has brought be on as a player. I am enjoying my rugby and I don’t get into the week and think I can’t really be bothered! Every time its training, I can’t wait to get there and work. It is a great set of lads as well.

“Playing in National Two North is enjoyable. You are obviously playing against some ex-professionals as well as players who have been in that league for years so you are always gaining experience. It brings the best out of me as a player as well because I’m playing with a better standard of players and playing against better opposition.

“My main focus is to now be in the first team squad week in, week out and hopefully, I can get picked for the Lancashire senior squad to try and have a successful season with both teams again.”