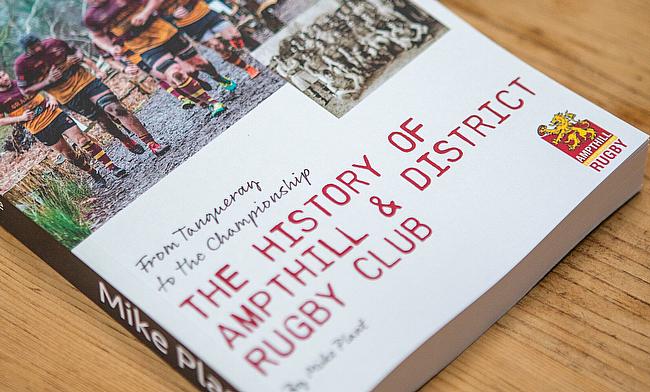 Following the release of Ampthill’s complete history, Joe Harvey has reviewed From Tanqueray to the Championship.

Ampthill’s rise to the Championship has been closely watched by ncarugby.com

Their very first mention on the website was all the way back in October 2014, following their 53-7 win over Harrogate in National Two North. That game was part of 26 matches that the team would win that season before being promoted by way of the play-off, beating Bishop’s Stortford at Dillingham Park.

From that point onwards, the club never looked back. Following four seasons in National One, Mark Lavery and Paul Turner led Ampthill to the second division of English club rugby. Whilst their first season at that level was cut short due to the global pandemic, the club were placed in fifth position by the RFU.

It was a dream first season in the Championship and in From Tanqueray to the Championship, the club’s 70 years history is catalogued, offering a fascinating insight into how the side has grown from being formed in the lounge of the White Hart Hotel in 1950, to competing with established professional clubs such as Newcastle and even multiple European champions Saracens, when the 2020/21 campaign eventually starts.

It is former Ampthill player, Mike Plant that has put pen to paper to teach people about the club that he represented in the 1970s and 80s. What is clear to anyone who will pick up this book, is that it is a labour of love and far more than a mere chronology of the club.

Throughout the text, there are consistent passages contributed directly from people associated with the club in that time period. In the early 50s, you learn how Ampthill almost folded due to a lack of players. As time passes by, you find a club beginning to establish themselves and become competitive, rising slowly but surely through the divisions when leagues were introduced in the 1980s.

Released as part of Ampthill’s 70th anniversary, the whole book is a testament to a side that is by no means going to forget where they have come from.

Our congratulations go to both @ExeterChiefs and @BristolBears on their European wins and especially to @BenEarlba who made his Senior Rugby debut for Ampthill in a pre-season friendly at South Leicester before making 7 appearances for the A's in the 2016-17 National One season! pic.twitter.com/75rVxpt57t

Regularly there are profiles of people that were key to the club’s development and invested their time, money, blood and sweat to grow a club in one of England’s smallest counties. These are sometimes in the form of obituaries, some key members sadly no longer with us and unable to see Ampthill mixing it with the big boys of English club rugby.

In particular, there is a tribute to the club’s first ever chairman, and founding member, Richard Dillingham.

Having passed away in 2001, the page on Richard explains to you how much the teacher has contributed to sport in the county, never mind just rugby. It is the profiles of these individuals that gives you a real insight into the foundations that the club is built on, making it all the easier to form a soft spot for Ampthill.

For example, I have no personal connection to Ampthill or even Bedfordshire, but having read From Tanqueray to the Championship, I can honestly say I want to see nothing but success for this club.

Part of this is because simply nothing is forgotten by Mike Plant in his copy. Whilst the First XV might take the headlines, he finds space to discuss how the Second XV, Third XV, Fourth XV, Fifth XV, Colts and even how the Juniors fared.

Firstly, it is a sign of the club’s attractiveness to it’s local area, but also testament to their achievements over the years. In the 1950s, the club almost flamed out of existence because of a lack of players, but now they have six senior sides. It is remarkable.

It’s a cliché to just say ‘this is how a proper club is run’, but appropriate. As the years progress, you begin to see the influence that Ampthill began to have on rugby in their county and even further afield.

Numerous players would represent Bedfordshire, but as time went on, players would complete their development at Ampthill, before their talents were recognised by those in higher competition.

The club’s mini and youth section was founded in 1971, now aptly described as the ‘jewel in the crown’ of the club, with many players having gone on to represent the Ampthill’s senior sides or even having stepped up the divisions to establish themselves in the Championship and Premiership.

Lewis Ludlow now captain’s Gloucester in the Premiership, whilst Dean Adamson became a try scoring machine for Bedford Blues and Josh Bassett is ever-present in the Wasps starting XV, accrediting much of his success to Ampthill.

“That’s where I started my rugby,” Josh said, “so Ampthill is always going to have a soft spot in my heart. For me, the moments that stood out, we actually won the U17s National Bowl competition and that was kind of where I thought that maybe I can start progressing with rugby.

“I hadn’t even played county level up until U18s. I was certainly a late bloomer as they say, but I enjoyed every Tuesday, every Thursday session down there. I loved what the club was about. It is so family orientated and then to see them rise through the ranks and now we are playing Championship Rugby, it is absolutely fantastic.

“They love rugby in Ampthill and like I said, it is great to have known that I have played for such a good club and now for them to have that opportunity to be in the Championship and play against Bedford, my allegiances are a little bit torn when they play against each other, but it is great for rugby in such a small county.”

A year ago today, our 1st XV went away to Loughborough Students needing a point to secure the National One title and promotion to the Championship!

We’ve chosen some of our favourite pictures from the day but we’d love to see yours!

Enjoy the memories and #StayHomeSaveLives pic.twitter.com/Gv66QHvqlC

As I am trying not to give too much away, the book concludes with their most recent achievements. Of course, there is reference to the numerous Tongans that made their way to Bedfordshire to represent the club and the likes of Moritz Botha and Dave Ward who joined Ampthill following the promotion to the Championship.

Furthermore, you get a perspective into how the club prepared for life in the second division and how they fared. Even the most current issues are mentioned; funding cuts, proposed changes to the Championship and their vision for the future.

Again, there is a tightrope of not wanting to give too much away in my thoughts of this collection of stories and reminders of where the club has come from, but also that overspilling enthusiasm about what the future has in store for those in maroon and gold.

Ampthill is a club that has not, and will not forget their past. There is something rather beautiful about that, don’t you think?

From top to bottom, nothing is missed and as much as the first team now find themselves in the Championship, the club is still exactly what it says on the tin: Ampthill & District Community RUFC.

You can purchase a copy of From Tanqueray to the Championship here.