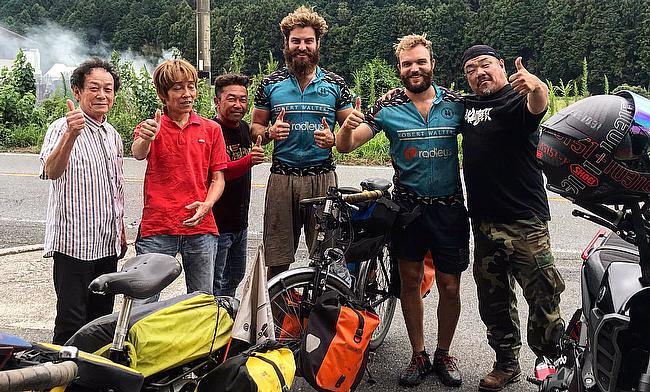 One half of the Hairy Handlebars, George Cullen, reflects on a remarkable 8,700-mile bike ride to the Rugby World Cup, where they raised over £33,000 for the charities such as Movember.

There were many memorable moments from Japan 2019 and throughout the tournament, it felt as though everyone gripped by the Rugby World Cup was experiencing the same, unforgettable journey.

Uruguay’s victory over Fiji ignited the competition and then there were the Brave Blossoms who flourished with the spotlight on them. Japan stunned Ireland and Scotland in the pool stages to reach the last eight before their fairytale story came to an end against eventual winners South Africa.

For the Springboks, this was also a World Cup which will be etched in their history. Siya Kolisi became the first black South African captain to lift the Webb Ellis Cup and they did so at the expense of England, whose magnificent display against New Zealand in the semi-finals will go down as one of the great World Cup performances.

But away from the field, another World Cup achievement also captured the imagination – a 8,700-mile ‘adventure’ to be precise.

George Cullen and Ben Cook, aka the Hairy Handlebars, cycled from London to Tokyo across 19 countries to experience the showpiece event.

The Hairy Handlebars London to Tokyo Cycle 2019 – Completed…. 6 months, 14,000km, 19 countries and countless memories to last us a lifetime. Thank you everyone who has got behind us and donated to help us hit our £30k target @MovemberUK @TheIWFoundation pic.twitter.com/hI8KglG1nV

The duo set this remarkable challenge “over a few beers” back in 2018 because they were keen for an adventure, but also to raise funds for Movember as well as the Ian Williams Foundation.

After six months on the road, George and Ben arrived in the Japanese capital on the opening weekend of the tournament and it is an experience neither will forget in a hurry.

“We were both at the stage of our lives where we wanted a bit of an adventure,” George told ncarugby.com. “We had a chat over a few beers initially and thought ‘let’s just do it!’

“We knew we wanted to do something in 2019 and we saw the World Cup was starting in September and we thought that was perfect timing. It was a case of then telling people we were going to do it because it is easy to come up with these ideas, but you’ve got to be accountable and tell people you are going to do it so you don’t find excuses!

“Obviously, to raise money for charity was a huge thing. It was very much the adventure for us, but we thought if we were going to do something this big, we need to raise money as well because it would be a shame not to. We both have friends who have suffered from mental health issues and Movember was a perfect fit. We both grew moustaches and came up with the Hairy Handlebars! It was great fun, but it is an amazing charity and one we are passionate about raising money for.”

In total, George and Ben raised over £33,000 with 10 per cent of their sponsorship being donated to the Ian Williams Foundation, which aims to reduce cardiac issues in sportsmen.

Before the Hairy Handlebars had even hopped on to their bikes at their starting point in Covent Garden, the support for the duo was building. Articles in the national press as well as the backing of Harlequins and Bishop’s Stortford helped set the stage to spur George and Ben on to Japan.

George added: “It became apparent pretty early on that people were kind of interested in what we were doing! It was obvious we were going to have a bit of a platform to raise awareness. Harlequins really helped out and all the guys at Bishop’s Stortford were amazing as well.

“Harlequins kind of gave us some big exposure beforehand, but that is not to understate the incredible efforts the guys at Stortford put in for us. They have been really behind it from the start which is great.”

George was in attendance at Stortford’s last National One fixture against Blackheath and he aims to be back playing for his club side before Christmas, but as he regains his rugby fitness, the memories of his adventure with Ben still burn bright.

And one country they visited, in particular, stood out.

“Our favourite country was Tajikistan,” George explained. “The first reason why was because it came off the back of riding through the Kazakhstan desert for a month so it had been tough! We came into Tajikistan and it is basically one big mountain range. It is just the most beautiful place I have ever been. The people were just so friendly. It is not a rich country at all, but people were so welcoming and shared what they had. We got taken in four or five times and given a bed and food. They wouldn’t take any money from us.

Some great stories here of fans travelling to Japan by any means possible! #RWC2019 https://t.co/gtatds66sQ

“We were cycling up to about 4,300 metres and there were 7,000 metre peaks around us and stuff. It was absolutely mind-blowing and beyond anything I have ever experienced. We were riding along the border of Afghanistan for four or five days which is basically just the Panj River which marks the border between the two countries. It was an insane place.”

After travelling across Europe and Asia, the final destination was of course Japan. George admits the positive stories surrounding the country in terms of the people and atmosphere were “absolutely right.”

The duo were also able to put their feet up in Shizuoka and Oita as they watched the Springboks against Italy before viewing England v Australia and Wales v France in the quarter-finals.

Across their 14,000km journey, George and Ben had to deal with different elements in terms of terrain, altitude and location but, amazingly, their bikes were able to survive with only some minor hitches along the way.

“They were actually fine!” George said. “We had a few small issues like breaks and gears, but nothing which was fatal at all! We aren’t cyclists at all! That’s the thing – if a certain thing had broken, we wouldn’t have known how to fix it!

“Weirdly, looking back, it is almost a shame something really bad didn’t happen because it would have added to it all! We got lots of punctures when we were in China. Although, the roads are really good there, there is metal all over the road so we were getting four or five punctures each a day, but we can’t complain too much!”

George returned to the UK last week and now his target is to return to full ‘rugby’ fitness for club side Stortford, who are continuing to support Movember this month.

Alongside the NCA, both organisations are using rugby as a tool to increase the awareness of men’s health and George feels the sport can certainly play its part.

“I think when you look at what they are promoting, the message is about men being open and being able to talk to people,” he added. “I think like in a rugby club environment, you have your mates there and there shouldn’t be any judgement.

“I think it is a perfect marry up because I guess, rugby players have always been hard blokes who don’t talk about their feelings and I think Movember is a really inspiring and powerful way to get people talking.

“In the whole of society, if they see rugby players doing it, I think it is positive. With the National Leagues, there are teams all over the country and I think it can only be positive. If it can save one person’s life, then that is something you have helped change.”

If you are interested in getting involved with the NCA and Movember, make sure you sign up to movember.com & join our Network here