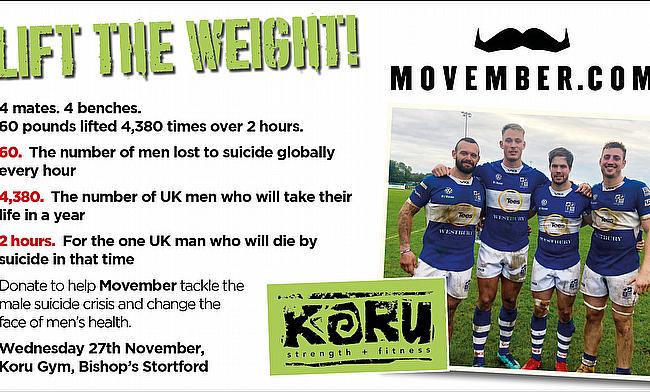 This is an article we are more than happy to write. At the beginning of last month, we began our National League ‘Movember’ campaign and truthfully, we knew it would be difficult to connect with every single club about our ‘partnership.’

Podcasts and social media posts were produced to increase awareness of our own NCA Network in conjunction with the phenomenal work Movember do and it was key for us to also highlight why rugby can be used as a tool and as a platform to continue spreading the word about men’s health in the UK.

We have to hold our hands up. We were wrong, but we shouldn’t be surprised.

The teams plying their trade in National One and both sections of National Two showed us why our sport can bring people together and the generosity shown has been overwhelming.

“I think we have been pleasantly surprised by the amount of support we have got from the National Leagues,” said Dan Elsom, who has played an integral part in Bishop’s Stortford’s fundraising as well as being the press officer for Movember.

“Obviously, men’s health is a topic which has been in rugby for quite a while now and it is being talked about and becoming a bigger thing. I think when you hear guys from the professional set-up talking about mental health or guys like Jonny Williams at Newcastle Falcons, who is going through testicular cancer, them being open about it encourages people in the National Leagues to have that conversation.

“It is a bit of surprise to see the amount of money these clubs have raised, but it isn’t in a way!”

As November drew to a close, the overall NCA Network total stood at just over £11,000 and we have to admit we have had to change our fundraising target not once, but twice, because of the support we have received.

Men’s health issues continue to be in the spotlight and mental health is a topic which has unfortunately been in the NCA headlines over the last month.

The passing of Scunthorpe 1st XV player James Walker, who tragically took his own life, hit the National League community hard but the reaction from our clubs has been commendable.

Fantastic evening @sheffieldtigersrufc learning about mental health. Amazing talk from @broaders13, all at @ScunthorpeRUFC learnt so much. Hope to do something similar very soon. Thank you for the funds raised for @onefortheladscharity in memory of #4jimmy Class acts!! pic.twitter.com/eZXjYmITTj

The likes of Sheffield Tigers, Hinckley, Loughborough Students and Caldy have all rallied around Scunthorpe to raise money for their local men’s health charity, One For The Lads.

For Elsom’s team Bishop’s Stortford, men’s health issues have also impacted them in recent years which why the Herefordshire based-club have played a main role in pushing the Movember campaign at National League level.

Along with Cambridge, Loughborough Students and Fylde, the quartet of clubs have each raised over £1,000 with Cambridge passing the £2,000 mark.

“In terms of Bishop’s Stortford, as we mentioned last month when we did the podcast, we are particularly passionate about it,” Elsom said. “Stortford has been unfortunately affected by suicide quite recently as well. With it being such a tight-knit community, it does make sense for everyone connected to get around.

“With testicular cancer and prostate cancer also being our two other causes for Movember, they affect people all over the place. We have got a very broad set of ages up at Stortford so it does impact everyone so it is another reason for us to get involved.”

Elsom, alongside teammates Chris Smith, Baxter Wilson and Rob Duff, took part in a two-hour bench press challenge (which they all completed) on Wednesday night to add to their amazing work.

I've roped in three great mates to tackle this challenge with me tonight for @MovemberUK. It'll be tough, but nothing compared to the struggles some men deal with every day. Together we can tackle the male suicide crisis. Please donate: https://t.co/dmJ8JkeCbj #Movember pic.twitter.com/IeGHqdHnNA

The four Stortford players had to lift 60 pounds 4,380 times and Elsom explains the reason behind the challenge.

“I don’t know what really made me pick it up in the first place, but I have seen a couple of guys for Movember doing these ridiculous challenges!” he said.  “There is a guy called Fergus Crawley who has done like 13-hour workouts which is a little more intense! Being in relatively decent shape, we gave ourselves a bit of a challenge as well!

“It is something that seemed to sit quite well with the statistics we have around suicide and we wanted to tie those in a bit. The 60 pounds was originally 60 kilos, but that might have been a bit ridiculous. I think 60 kilos over 4,000 times would break us!

“The four of us guys are all really close mates at Stortford. It’s great we can raise a bit of awareness and bit of money for other guys out there that might be struggling with mental health and hopefully we can help reduce some of these numbers.”

The work doesn’t stop for Movember when we enter the final month of 2019. The charity will continue collecting donations before turning their attention to next year, which will include another Movember campaign as well as Testicular Cancer Awareness month in April.

On behalf of Dan, the Movember team and everyone connected with the NCA, we thank you for your immense support and generosity.