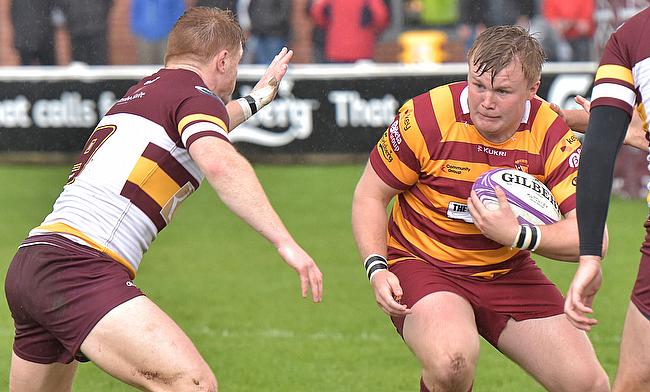 “After rugby, everyone enjoys a beer”

From an England international at Twickenham to a Saturday afternoon watching your local rugby club, you can guarantee you won’t be too far away from a beer.

Before, during and after the match, pints will be poured and bottles will be opened as families, fans and players enjoy the game we all love.

But for one current National League player, he decided to take his passion for beer and rugby to the next level to create Cannabrew.

Fylde’s Elliot Horner is the founder of the business and his aim is to combine CBD with beer to produce a great tasting product.

CBD is used by athletes across the world, most notably by England international George Kruis, to help with physical recovery and Horner feels there was a gap in the drinks market to create his new company.

Great to see some of the lads from Fylde Rugby Club having a session on our CBD infused beer Sesh after their game. We hope you enjoyed it lads!

“I saw an opportunity and I am a bit of beer nerd and I quite like combining things with beer!” Horner said.

“I take CBD anyway because it has numerous health benefits so I thought I’d mix the two together and see how it goes. It tastes great so I started a new company based on it.

“After rugby everyone enjoys a beer. Now they can have it with the combined benefits of CBD. CBD really helps me with recovery. Athletes all over the world are taking it. It is still pretty early doors for us, but it is going well!”

Currently, Cannabrew produce a 4.5% session IPA. It is made with premium English and American hops and has a citrus flavour which is easy to drink and they are also developing a pilsner and an apple cider as well.

However, this isn’t Horner’s first venture into the beer industry.

In 2018, Horner and brother Lewis started up their own micro-brewery called Horner Bros which is based in Lancaster. Their aim is to produce top quality beer in their local region of Lancaster.

Horner Bros is still going strong, but Elliot is now keen for Cannabrew to target a wider audience despite it also being based in the North-West of England.

“Me and my brother basically had physical jobs,” said Horner. “I was a stonemason and he was a labourer for a builder. We were both getting a bit sick of constantly aching from work and rugby!

“We were working outside in the cold and we both thought we may as well give something else a shot so we decided on going into beer over a pint!

“We are still keeping our local trade up and running for Horner Brothers Brewery. but Cannabrew is something I am doing on my own.

“Horner Bros taught me a lot about the industry and how to make good quality beer as well as keeping it consistent. That is really quite key to be able to continually provide a quality product.

“The aim is to now get Cannabrew across the country by doing most of our sales online.”

Currently, Cannabrew has a number of student ambassadors on board to help promote the business and the sale of products, but one of the key audiences Horner wants to target are rugby clubs.

As mentioned, CBD helps sportsmen and women with their physical recovery and Horner admits his club, Fylde, have fully embraced Cannabrew so far.

He added: “In our selling, I want to get across the point I play rugby.  People know about the rugby culture in want to have three or four pints of good beer and that sort of works hand in hand with rugby culture!

“A lot of the Fylde lads are really getting behind it. Some of the lads are buying it every week, giving it to their mates and spreading the word. On the buses on the way home, we are all drinking a few as well. I am now the booze shop on the way home!”

#Fylde make two changes in their starting line-up for the trip to @TynedaleRFC (ko 3pm). Ralph Dowds is at centre and @JacobConn3r returns to the backrow. Jonny Wild joins the replacements. Full squad at: https://t.co/fq4qHrbvgl pic.twitter.com/7eP8MS0h5D

There would have been many Cannabrew beers enjoyed on bus journeys back to Fylde so far this season as Warren Spragg’s side have made a flying start to the National Two North campaign.

Horner has started all four of Fylde’s matches this term and the Lancashire club are currently unbeaten and they sit in second place in the division.

As things stand, Fylde are one point of leaders Caldy, but Horner knows there is still a long way to go in the season.

He added: “It has been a pleasing start. It is a long season ahead of us so it is about keeping our heads down and working hard. Rugby means everything to me so it is about putting our heart and soul into it.

“We are just taking each game as it comes and hopefully at the end of the long season there is a light, but we’ll just have to get their first.”