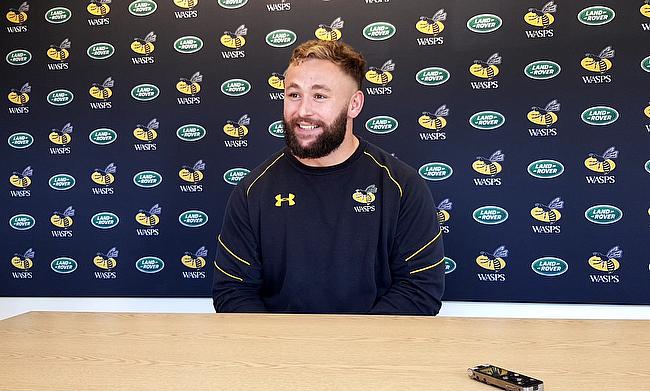 Ali Stokes went along to Wasps to chat to young prop Will Stuart about why his time in the National Leagues has helped shape him into the player he is today.

Over the last two seasons, England and Premiership fans have found themselves fascinated by the latest young talent coming through ‘the system’, with effervescent fly-halves, scavenging opensides and hot-stepping outside backs catching the imaginations across the nation.

However, it is neither the next Marcus Smith, Jordan Olowofela or Tom Curry under the magnifying glass this week.

The less glamorous, but by no means less influential position of tighthead is today’s area of study. The subject? Dai Young’s latest ward, Will Stuart.

The 22-year-old is currently relishing his breakthrough Premiership campaign, having started two out of Wasps’ first four games of the season with great effect.

?? TEAM NEWS: Director of rugby Dai Young names his side to face @SaleSharksRugby in @GallagherUK_ @PremRugby at the AJ Bell Stadium on Saturday.

Whilst you’ll scarcely come across an up and coming rugby player waxing lyrical about their impressive start, Stuart admits he is happy with the way the season has begun and that he always knew he could make an impression at the top tier of English club rugby.

Stuart explained: “Yeah I’ve been happy. I’ve always been confident that if I do get the shot, that I could try and impact it as much as I possibly can.

“It’s just a matter of being patient and trying to get that shot. Obviously now it’s happened and I’ve had a run of a few games, I’m happy.

“There’s loads of stuff I can work on still, scrummaging I still have a long way to go, to be where I want to be. But I’ve been happy with the first four games, definitely.”

While the aforementioned Smith, Curry and Olowofela spent limited time playing throughout the leagues before becoming Premiership regulars as well as being involved with England; a prop must take the path less travelled.

As clichés go, the old line that props take more time to master their craft than any other position is met with a more agreeable reception from fans compared to the blasé one-liners churned out during players post-game interviews.

Stuart’s path, which is invariably far muddier and fraught with the odd dark hole to stick your head and shoulders into, is not one of eye-catching, try-scoring passes on the age-grade circuit, but an ascending journey from the lower leagues all the way up to the bright lights of Premiership Rugby.

The 22-year-old spent the last two years playing for Birmingham Mosely and Blackheath in National One and Nottingham in the Championship.

Stuart honed his trade by scrummaging against ‘old vets’ and receiving a hiding on regular intervals when he first started out.

As much as his experiences in National One and the Championship were undoubtedly far from glamorous, Stuart is adamant that he would not be the player he is today without those trials and tribulations.

“I was eaten alive by some older vets who showed me the way! I had two years there and then went and played in the Championship and had some experience there.

Here’s a bit of a teaser ahead of my interview with @WaspsRugby up and coming tighthead @WillStuart10 ??

Including a few hard learned scrum lessons. Including “Eaten alive by some older vets”

“I can’t emphasise how important it is, especially for a young prop, going through that process. It’s different to other positions. I think some props get frustrated as there’s slower progression. Looking back, it was massively important to me.

“I remember, my first game of Men’s rugby, which was probably 30 kilos ago. I was packing down on basically our five-metre line, getting driven back and with school rules, you can’t drive back over the five-metre so I was kind of like ‘what are they doing? They can’t do that.’

“So two pushover tries later and a bit of a hiding, I got taken off after 30 minutes for Blackheath. I slowly realised what I was in for. You’re only going to get that learning stage through those leagues. As a prop, that’s massive.

“At the time it was hard going from school level to that and it was trying, but looking back on it now, it was massively important for me.”

The 133kg frontrower accredits former Gloucester prop turned citing officer and coach Nick Wood to drumming into him that his former days as a number eight, where ball-carrying was his main role, had come to an end.

“We had Nick Wood the ex-Gloucester prop at the school [Radley College] as well,” Stuart explained. “He used to come in and help Tom West and who is also here [at Wasps]. We were both at the same school. He basically was the first person to make it clear that scrummaging is my most important job.

“From then on, that’s what I’ve been trying to work on massively because it’s something that I always looked at second and now it’s basically my one job. It’s where I have to put all my effort in, if that’s not going right, it doesn’t matter how well I’m carrying around the pitch, it’s futile really.”

Stuart now falls under the tutelage of Wasps DOR and former Wales and Lions prop Dai Young, who Stuart reports still has the ability to embarrass the full-time professionals 30 years his junior.

“He still occasionally scrummages in training against the lads and sort of folds you up, which is always great for the confidence.”

The promising young tighthead is set to compete with former England prop Kieran Brookes for a fifth consecutive game week, with both registering two starts apiece so far this campaign and the prospect of facing last season’s fellow semi-finalists Newcastle Falcons.

Whether Stuart starts at Kingston Park this weekend or not, the youthful prop will have put himself in good stead for selection meetings later this season, when injured tighthead Jake Cooper-Wooley returns to fitness with the likely ambition of reclaiming his spot as Wasps’ first-choice tighthead.