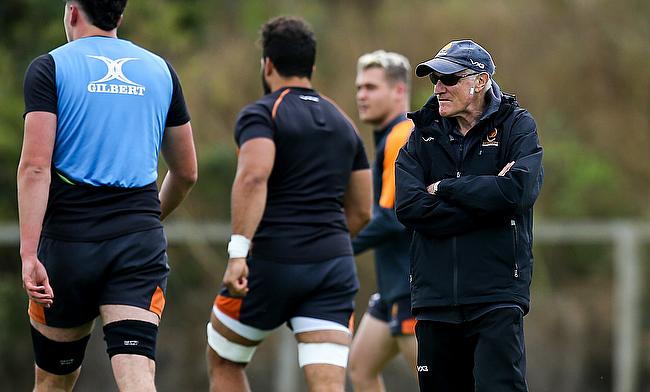 Since the return of the Gallagher Premiership, Worcester Warriors have won just one of the four games they have played.

Most recently, Alan Solomons put out a youthful side against Exeter Chiefs, but his young guns lost 59-7 at Sandy Park, with Ashley Beck scoring Worcester’s only try.

Much of the South African’s squad was made up of academy players who have been promoted to the first team for this concentrated run of fixtures and in previous interviews with Talking Rugby Union, Solomons has spoken about his focus on youth as he continues to build the club.

When asked about how he feels his young players have performed in the four games since Worcester took to the field again, he was glowing in praise for them.

“Young Lewis (Holsey), the loosehead prop, he has got a bit of game time that probably none of us expected but he will be better for that experience! Kai (Owen) is due to play, young Joe Morris has got game time there. I think it is a huge positive for these lads.

“Normal circumstances, maybe they wouldn’t have got these opportunities. I particularly look at Noah, I think he has grasped that opportunity.”

Before lockdown and the restart, many of Solomons’ youngsters were spending their time dual registered in the Championship, National One and National Two. Starting at hooker on Sunday, Beck Cutting has plied his trade with Birmingham Moseley and full-back Heward was registered to play for Stourbridge for the 2019/20 season.

It is a pathway well known to many of the first team squad. Vice-captain Will Butler also spent time in the National Leagues playing for Moseley, whilst he also had leadership roles at England age-grade level and with the Worcester A-League side.

With academy players having stepped up to the challenge in the eyes of their Director of Rugby, the 70-year-old says that credit for player performances goes to both the individuals and those coaches charged with aiding their development.

“I think our academy has done a splendid job and I think the clubs that they have been able to play with have done a splendid job,” Solomons said. “We always integrate everyone, completely into our academy. We had eight lads introduce themselves into the team and they all took part in the warm-up at the start of the week.

“They get integrated and they are part and parcel of squad. I think, that is what has worked really well for us and we have got a good crop coming in there. I just think of Seb Atkinson, Fin Smith, Jack Forsythe, Oli Wynn, so there are some good lads coming through there and, of course, others.”

With the club safe from relegation due to Saracens’ enforced demotion, Solomons has been allowed to prepare well for the future, as well as introducing a new coaching staff following a summer of arrivals and departures at Sixways.

At the time of the restart, Worcester still could have achieved a top eight finish which would have meant Champions Cup qualification, but after three losses, that objective seems far less achievable.

Regardless of that fact, Solomons says that all he, his coaches and players learn at the close of this season will stand them in good stead in preparation for the next term.

“Of course, one wants to do as well as you can, but this period has been invaluable for us, with the new coaching staff,” Solomons said. “I think it is critical they get an opportunity to bed in their systems and where guys are actually playing in a game makes a massive difference.

“You then get the reps in prior to the match and that is all part of the coaching process and the development of the player. We have a real window of opportunity and it has been like this for a time in the 19/20 competition. This is a real opportunity to bring on our young players with greater development and you have got to look at the model of Exeter and what they have done.

“A lot of them players are absolutely huge stars in the England firmament. They have come through that academy system and all they had at a point was the potential because they were played and developed at the club and all those players have developed. I would hope for something similar here.”