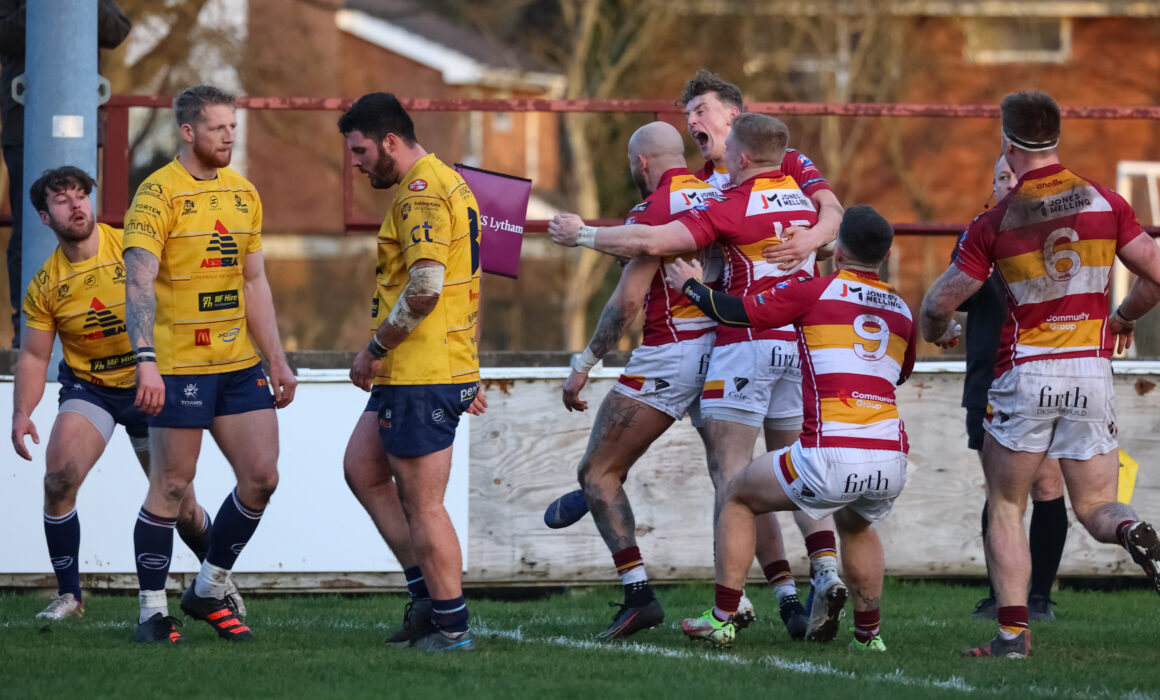 With the Six Nations getting underway across the course of this weekend, RFU CEO Bill Sweeney and World Rugby Chairman Sir Bill Beaumont exclusively chat to National League Rugby about the growing importance of the community game. Photo Credit (Gareth Lyons)

It is just under two years since the Covid-19 pandemic forced the UK into lockdown and the effects of the virus led to hundreds of rugby clubs pulling down their shutters and closing their gates without knowing when they would be open again.

“Last time we spoke, we didn’t know how long Covid was going to go on for,” reflects RFU CEO Bill Sweeney. “It has just trundled along for so long.”

Sir Bill Beaumont, chairman of World Rugby, simply adds: “Clubs like Fylde, they are the community.”

Two of the most well-known figures in the game are sat together in the Arthur Bell Room at Fylde Rugby Club looking ahead to a huge top of the table clash in National Two North.

The clubhouse at Woodlands is a hive of activity and with two hours to go until kick-off, the atmosphere is bubbling away nicely, but this sense of occasion and the camaraderie that goes with it went missing for 18 months.

The excitement of a Saturday afternoon was absent, with many wondering whether rugby clubs would survive the impact of Covid-19.

All of these points were genuine concerns for Sweeney, but he was quick to commend the spirit of National League clubs and community clubs who have battled through one of the toughest periods in recent times.

“I think it is absolutely incredible when you consider how many clubs we have got in the community game, not one single club has gone bust over that period,” Sweeney reveals. “That is a real testament to the volunteers in the game and the strength of the grassroots community game that we have got here.

“We have learnt a lot through Covid. When you talk to clubs from a financial point of view, most of them are in better shape than when they started off in Covid. They have found ways to generate more revenue which has been incredible and they have figured out how to really manage the costs.

“When we got that additional government support, one of the reasons why we got a disproportionate amount of support compared to other sports was a realisation that rugby clubs are community clubs. They do a huge amount for the local community and this is why we got £135m of the £350m.”

Our conversation is happening in view of the 1st XV pitch which is currently being occupied by mini and juniors from both Fylde and Vale of Lune: “Here is a community-based club,” adds Beaumont. “People come down here to enjoy themselves. If you look outside, there is a curtain-raiser of Fylde playing Vale of Lune U11s. To me this, this is what rugby is all about.”

Beaumont lives five minutes down the road from Woodlands and it is well documented that the former England captain forged his rugby career at the Lancashire side.

All three of Beaumont’s sons, Daniel, Sam and Josh, have represented Fylde so he more than understands how important local clubs are to players at all levels.

“Danny Care’s Dad came up to me once,” Beaumont recalls. “He said: ‘I remember you opening a door for me at Vale of Lune at an U12s session and you had a word with Danny!’

“I can’t remember that! What I do remember is going to Vale of Lune many times with my three lads playing in those tournaments. That is where the internationals start. Your Johnny Wilkinson’s, that is where he started. That’s why I think community rugby has got so much to offer.”

However, with community rugby dormant for such an extended period of time, there was the fear that the next Danny Care or the next Johnny Wilkinson would slip through the net.

The impact of Covid-19 means participation numbers in the sport are yet to return to pre-pandemic levels. Where once sides were able to field four or five teams on a Saturday, some are struggling to find players to make up even a 2nd XV.

Yet, Sweeney was able to offer some positive news. Since Christmas, more people are starting to get back into rugby and as Covid restrictions begin to ease, clubs and teams are starting to reassemble.

“It has been a major challenge,” adds Sweeney. “Society is changing. There are more things to do with your time at the weekend. It takes more players now to support the first XV than it did in my day because people want their weekends off, they want their honeymoons, they want their stag-dos etc!

“Quite often actually, when you listen to the other sports, you realise that we are probably in a slightly better place. I think the reason we are in a better place is because grassroots rugby, the clubs tend to own their own assets. You come here to Fylde, they own their clubhouse. You can host the mini and juniors, you can throw events on at lunchtime whereas a lot of other sports don’t have that. I think that has enabled us to get through Covid and the most difficult part of it.

“There were a lot of people very nervous leading up to Christmas. You have got self-employed people who play rugby who were worried about getting Covid, they were worried about infecting their friends and family so we did see some worrying drop-offs. All the data we are getting now seems to show that we are coming back again which is great.”

It seems as though National League clubs are also making up for lost time. The highly competitive promotion races across National One and both National Two divisions are a testament to the talent which tiers three and four possess.

Whilst the finishing line is slowly coming into view in the National League Rugby season, the traditional buzz at the top of the game is beginning to simmer with the Guinness Six Nations just around the corner.

The curtain-raiser for the international calendar will be lifted this weekend with Wales travelling to Ireland before Scotland host England in the Calcutta Cup.

Many of Eddie Jones’ new-look squad have links to National League and community clubs, which highlights the pathway which these local sides can provide.

The likes of Ellis Genge (Clifton), Joe Marler (Esher), Jack Nowell (Redruth and Plymouth Albion) and Jamie Blamire (Tynedale) all experienced the lower levels of the sport and even Sale’s Bevan Rodd played in National Two North during a loan spell with Fylde in 2018-19.

Beaumont jokes as he is quick to claim the prop ‘as one of Fylde’s own’ but adds: “You can see the quality of player that there is [in the National Leagues]. Whether you are from Guernsey or whether it is from Tynedale, the length and breadth of the country, there are some very talented rugby players.

“Not every rugby player actually wants to be professional. There are a lot of very talented guys who could be professional but they choose not to be so I would encourage everybody to come down and watch National League Rugby because it is a good standard.”

Over the next few weeks, thousands of fans will be flocking to capital cities across Europe to take in the Six Nations whilst millions more will be watching on TV.

It was great to see so many welcome visitors who show an affection for the Club. pic.twitter.com/W68lSLRto9

The hope is that those who are unable to see the drama unfold inside stadia will be packed into clubhouses up and down the country and after a challenging two years, Sweeney is keen for the strength of the community game to continue shining during the championships.

“We have talked here about the importance of the community game and where players start, whether they start at the mini and juniors and work their way through.

“We have got a good working relationship with the Australian Rugby Union. I used to work with them previously in a different life, but they took a decision way back in ’99-2003 where they were going to only focus on supporting the national team. Their view was if we can build the best national team in the world, that will drive interest and drive participation. It didn’t work.

“The moment you stop investing in the community game, the moment you take your eye off keeping that thriving game in good shape, you cut off the pipeline.

“All of the players you see playing on a Saturday for England, they will have come through a community club somewhere so we’d encourage people to go down to your local club. The quality of rugby at National One and National Two is really competitive. Come down to your local clubs, support the club, get involved as much as you can and together we will continue to grow the game.”