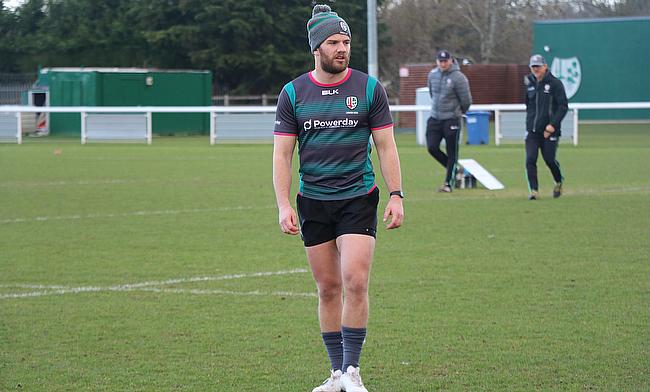 James Stokes may well have experienced a Christmas like no other. The festive period is always a demanding time for rugby players up and down the country, but for Stokes in particular, it was a whirlwind couple of weeks.

Stokes is one of the latest National League success stories to reach the Gallagher Premiership and those of a Cambridge or Coventry persuasion will know all about the talent the 28-year-old possesses. The versatile back scored 35 tries in 80 appearances during his spell in National One and the Championship with Cov and was omnipresent in the club’s sensational 2017/18 promotion season. He continued to kick on in the second tier but in December, the chance to play in the top-flight with London Irish arose.

As we chat over the phone, Stokes as just completed another training session at the Hazelwood Centre. Come Saturday afternoon, he will be ticking off his latest milestone after being named in the Exiles’ starting XV to take on Bayonne in the Challenge Cup. Irish’s European hopes came to an end against Toulon in the last round of pool matches, but this weekend presents another opportunity for Stokes to acclimatise to his new surroundings.

“Yeah, it has been amazing,” Stokes says when asked about his first few weeks with the club. “Everyone at London Irish has been so welcoming and they have made the transition really easy. It is now kind of on me to get to grip with all the calls and all the systems and stuff, but everyone has been really nice and I have settled in really well.”

With Coventry being a full-time club, Stokes didn’t have to leave a career behind when joining Irish. “Just selling my house and trying to sort someone to move into it has been my only stress!” he says.

✍️ | London Irish can confirm that it has added James Stokes to its squad.

James joins from @CoventryRugby, having made over 80 appearances and scoring 35 tries. Stokes is comfortable at both full back and on the wing.

The move to the Madejski Stadium happened so quickly for Stokes. In the middle of November, he was representing Coventry against Newcastle Falcons at Kingston Park, but just over a month later, he was making his Premiership debut.

“Irish had a few injury concerns at full-back and they kind of needed to strengthen that area,” Stokes says. “I had a call from my agent and they asked me if I would be interested so it was a 10 day to two-week period that was like a whirlwind. It all moved very quick, but it has been amazing. I also saw it as my opportunity.

“To be honest, I thought I was going to be a bit too old for this now and I had a bit of an injury problem last year so I kind of thought that my time had gone. We played Irish last year and my best mate from school is Alex Lewington, who was here for five years. He spoke really highly of the place and it is a dream, dream move for me. I have always viewed Irish as the pinnacle because of the great things I have heard about them so it is fairytale stuff, really.”

As a former Nottingham player, Stokes, in some respects, has built his way back up the rugby ladder to make it as a professional in the sport. Having taken the decision to leave the Championship club in 2013 due to a lack of game time, he dropped down two levels to balance his passion for rugby with a job as a graduate Environmental Engineer.

Working less than half an hour away from Cambridge Rugby Club, his love of the game was rekindled in National Two South.

“I was doing well with Nottingham, but in my second year, I didn’t really get much game time so I thought I needed to leave, drop down a bit, get some game time and find some love for the game again,” Stokes says.

“Going to Cambridge was probably the best thing I ever did because I met some friends for life and had a really good time doing it. We won promotion and I had a decent job and that gave me the confidence to kick on. Everyone was amazing down there. My time at Cambridge was absolutely fantastic.”

After clinching the National Two South title with Cambridge, Stokes never pulled on the Blood and Sand jersey in the third tier. Instead, he made his next steps in the game by signing for fellow National One outfit Coventry and the explosive impact Stokes had on the Midlands club guided them back to the Championship.

He topped the try-scoring sheets with 21 during Cov’s promotion season as the side won 27 of 30 matches to reach the second tier under the stewardship of Rowland Winter. The current Coventry Director of Rugby has been a prolific figure in Stokes’ career as Winter not only brought the versatile back to the Butts Park Arena, but he also sparked Stokes’ rugby journey into life when he signed him for Cambridge

Stokes cannot speak highly enough of his former coach: “I do owe a lot to Rowland,” he says. “There’s a bit of a joke at Coventry that I am his son! He has been fantastic. He kind of pulled me from the brink when I wasn’t playing at Nottingham and gave me life at Cambridge and got me back in love with rugby again. At Coventry, it was the same. If I had any problems or anything, he’d be the first one to help me out so I am looking forward to seeing him again for a beer sometime soon.”

Stokes’ National League journey actually began on loan at Leicester Lions in 2011 and having experienced both National One and National Two during an eight-year spell, Stokes insists the lower tiers do play an important part in a players’ development.

“They are massive,” he says. “I don’t think you can really skip it to be honest! No matter what kind of level, whether it be National Two or even lower than that, it is men’s rugby and there is nothing really like it.

“If you’re an 18 or 19-year-old or even older than that, it is the best place to learn your trade. Playing against these big, old lumps and getting that physical confrontation is something you can’t really replicate in maybe an A-League game or something like that. I’d definitely champion the National Leagues, for sure.”

Now Stokes his focused on the next stage of his professional career in the Premiership. The 28-year-old’s signing at Irish was announced December 20th and two days later, he found himself on the bench against Bath.” I spoke to Dec [Declan Kidney] and he said there might be a chance I would be on the bench for that Bath game,” he says. “I was really relishing it and Paddy [Jackson] got injured early on. I’d had two training sessions and I was straight in the mix! I was a bit like what is going on?!”

He got his taste of Premiership life 10 minutes into their clash with Bath, but arguably it was one of Irish’s most disappointing displays of the season with Stokes admitting things didn’t quite go to plan for himself and the team on the day.

“It was a tough old debut as I was still getting to grips with everything,” Stokes adds. “I probably didn’t do myself justice, but weirdly, I probably wouldn’t have it any other way. The lessons I got out of that debut, I will take forward and hopefully it will put me in good stead.”

Saturday will now give Stokes another chance to show his quality on the big stage. From making his Cambridge debut away at Redruth in 2013 to now competing in Europe, no-one can say he hasn’t deserved this opportunity.