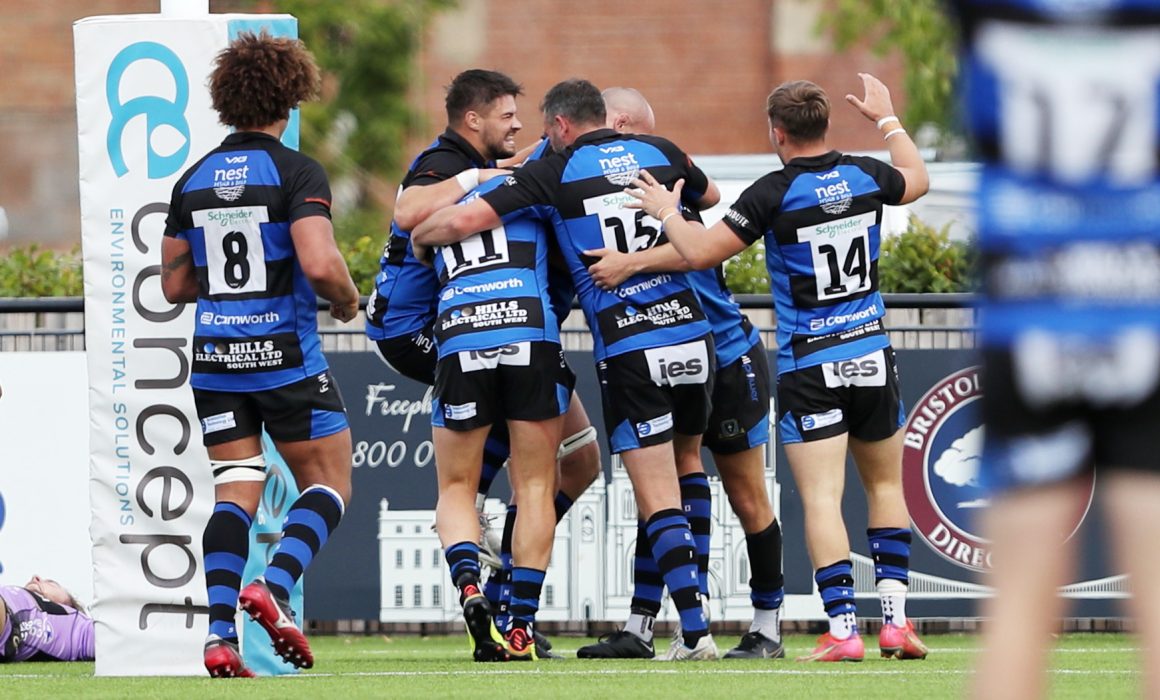 The first two rounds of the campaign have been breathless and the line-up for Round Three suggests the exciting start isn’t slowing down anytime soon. Photo Credit: (Ian Clark)

So after just two rounds, National One has a slightly familiar feel to it. Four of last year’s top six find themselves with maximum points thus far including Rams RFC (who host newly-promoted Hull on Saturday), Rosslyn Park (who entertain Chinnor on Friday night) and Cambridge (who welcome Taunton to Volac Park).

But sitting on top of the pile in these embryonic stages of the season are the 2021/22 runners-up Sale FC. Last weekend, they followed up their opening day win over Birmingham Moseley with a thumping 56-8 victory against Leeds Tykes. If there was any worry about a hangover from their title challenge last term, Jonathan Keep’s side have banished those thoughts with aplomb.

The next assignment for ‘The Dogs’ is an away trip to Plymouth Albion. The home side celebrated their first success of the campaign in Round Two and the drinks would have tasted sweeter following their triumph against South West rivals Taunton. After collecting two bonus points in defeat away at Cambridge in Round One, the men from Brickfields do seem to have it in their locker to cause Sale a few problems on Saturday afternoon.

In contrast to the early pacesetters, Birmingham Moseley and Esher will be hoping to open their accounts in Round Three as they kick off the weekend’s action under the Friday night lights at Billesley Common. The hosts will have reflected on their setbacks against Sale FC and Cinderford so far, but considering both of those clubs finished in the top five last term, Adam Balding’s side might well be targeting the visit of newly-promoted Esher to get off the mark.

While Moseley currently prop up the table, The EEEs are four places above them after picking up their first two points of the campaign last week in their 32-27 loss to Rosslyn Park. There will have been multiple positives to take from Round Two for Peter Winterbottom’s side and if Esher show the same sort of application in the Midlands, it could garner their first victory.

Elsewhere, Darlington Mowden Park – who have secured two wins from two to begin the season – take on Bishop’s Stortford in the North East and Cinderford travel to Leeds Tykes.

Wharfedale’s early season form has been extremely encouraging if you are of a ‘Green’ persuasion. Under new Director of Rugby Simon Verbickas, they have flown out of the blocks with wins against Preston Grasshoppers and Harrogate respectively and they will be entering Round Three in high spirits.

However, the visit of Hull Ionians will undoubtedly be their toughest test to date as their Yorkshire counterparts have also stitched together back-to-backs triumphs (albeit not consecutive bonus-point successes). Their eye-catching 27-22 victory against Rotherham Titans in Round Two might be a sign of things to come if the I’s are to challenge for top spot this term but they will want to avoid results like the 14-14 draw they experienced at The Avenue last season. In truth though, both clubs look like different forces in 2022/23 so we should be in for a cracker.

Across the other side of the county, two of the newcomers in National Two North collide as Sheffield host Otley in the Steel City. After both suffering defeats on their return to level four, they bounced back with victories against Sheffield Tigers and Huddersfield respectively, and their Round Two fixtures were packed full of drama.

Sheffield took advantage of a red card to get past their near neighbours while Joe Rowntree stayed cool from the tee to snatch a narrow 25-22 win for Otley. The last meeting between the pair came four years ago with Otley recording a 17-12 victory at Abbeydale Park so will history repeat itself on Saturday?

Back towards the summit of the division, Fylde, Tynedale and Sedgley Park will be keen to maintain their winnings starts when they face Harrogate, Sheffield Tigers and Preston Grasshoppers while Rotherham Titans host Blaydon and Chester take on Huddersfield.

Due to the introduction of National Two East this season, the opening weeks of this term do carry that element of the unknown but Barnes have grasped this ‘fresh start’ and are off to a flyer. A solid win against Worthing Raiders was backed up by an excellent away victory at Guernsey Raiders where scrum-half Josh Davies dazzled on the Channel Island. The London club may have finished in the bottom half of National Two South last term, but Jack Heald’s boys are certainly embracing this new era.

The same can be said for Saturday’s opponents, Dorking. Yes, they may have lost their opener against Blackheath but Armand Roux’s side showed plenty of quality and desire which was most definitely evident in their 44-24 Round Two win over Worthing. The Red and Whites produced a superb performance and they will be hoping to copy and paste that display when they take on Barnes in front of The National League Rugby Review Show cameras.

Second in the league standings in their second season in the National Leagues, Rochford Hundred have enjoyed the beginning of their adventure in National Two East. Danny Cleare’s side followed up their mightily impressive opening day win over Tonbridge Juddians with a tense derby day triumph against Westcliff, so it is safe to say there is a feel-good factor swirling around The Rugby Park at the moment.

To beat TJs – who were relegated from National One last term – highlighted how unpredictable this division might turn out to be and Rochford Hundred will be keen to repeat the trick when they travel to Blackheath on Saturday. Like the aforementioned Tonbridge Juddians, ‘Club’ also dropped out of the third tier in 2021/22 but they started the rebuilding job with a 29-10 success over Dorking. Their Round Two fixture with Sevenoaks was postponed due to an unfit pitch, but back on their own patch, Blackheath will be out to end Rochford Hundred’s 100 per cent record whilst simultaneously adding to theirs.

It obviously isn’t the case, but everyone associated with Dings Crusaders might feel like last season and this campaign have merged into one. The Bristol-based club concluded 2021/22 with nine victories from their final 10 games and this term, that winning feeling has just continued. A fantastic performance on derby day against Clifton in Round Two is a result followers of National League Rugby should take note of and the Crusaders have another local rivalry to look forward to this weekend.

A short trip to Scotland Lane – somewhere they haven’t visited since November 2018 – awaits and they will collide with Old Redcliffians in a quest to secure a third bonus-point triumph on the spin. The hosts will, of course, have other ideas and will be looking to respond to their 44-15 setback against Luctonians last time out. Old Reds have lost their last three meetings against their Bristol counterparts so can they set the record straight in Round Three?

While the ‘derby day’ feeling doesn’t apply to Loughborough Students and Exeter University, these two sides are very familiar foes despite never meetings in National League Rugby. Their battles at the top of the student game, BUCS Super Rugby, have always been fierce – with Varsity matches at Sandy Park some of the highlights – but this weekend will see the two institutions go head-to-head in National Two West.

Exeter have really turned on the style in their maiden season at this level and last Saturday’s superb 42-29 victory over Redruth shows Keith Fleming’s men are certainly not here to make up the numbers. Two bonus-point wins from two are what dreams are made of for the Green and Whites while Loughborough exploded into life last time out by racking up a half-century of points against Stourbridge. These two sides know how to entertain at university level and National League Rugby cannot wait to see how this unique clash plays out in the Midlands.

Sandwiched in-between Dings Crusaders (1st) and Exeter (3rd) are Leicester Lions who, like the league leaders, have carried last year’s momentum into this season. Gareth Collins’ charges are aiming to stretch their unbeaten run to 13 games when they host newly-promoted Newport (Salop) on Saturday while elsewhere, Redruth entertain Hornets, Luctonians travel to Bournville, Clifton face Stourbridge and Barnstaple meet Hinckley.