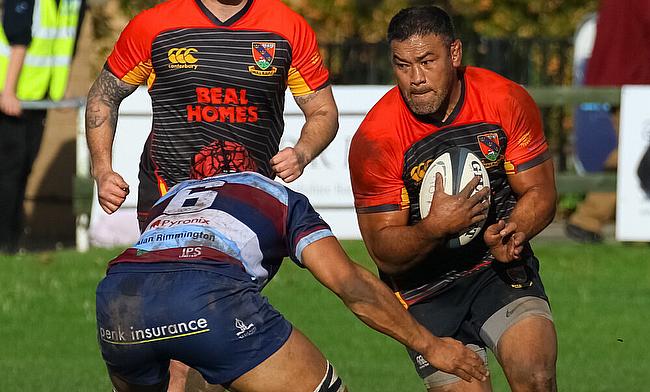 There are huge games at the summit and at the foot of National One, its first vs second in National Two North whilst three points separate the top four in National Two South. (Photo Credit: Gareth Lyons)

You could be forgiven for debating which National One fixture to focus on this weekend given the magnitude of some of the matches taking place in Round 23.

We have decided to highlight the clash at Heywood Road as third-placed Sale FC welcome Rams RFC (4th) to the North West.

With the news this week that only one side will earn promotion from the third tier this season, many might be quick to write off both of these teams but given the rich veins of form the duo are currently experiencing, they are more than capable of putting a run of results together between now and the end of April.

For Sale, they have won six on the spin since losing to Cambridge on January 8th and as things stand, Jonathan Keep’s side are just two points behind leaders Caldy. With this in mind, spirits will undoubtedly be high in the home dressing room but Rams begin March having suffered just one defeat in their past eight matches. Seb Reynolds’ men are eight points off the top with a game in hand so victory on Saturday would leave the Old Bath Road faithful possibly dreaming of a late title charge.

Your dogs to face @Rams_RFC tomorrow at The Corpaq Stadium

??Metcalf moves to the bench, Brady into start
??Longmore and Brown swap at hooker
??Carlile replaces Onasanya on the bench #OneSaleFC pic.twitter.com/vnREIovlAI

Of course, Caldy and Rosslyn Park (2nd) will have something to say about this with just one point separating the leading pair. The Wirral outfit host Plymouth Albion this weekend – who are seven points ahead of the bottom two – whilst Park return to action when they travel to Cinderford (5th), determined to arrest a recent run of three losses from their last four games which has seen their promotion hopes suffer a decline.

Away from the action at the top, Leeds Tykes (14th) and Blackheath (12th) face off at Well Hall in what has quickly become a massive game at the foot of the division. Club’s gut-wrenching defeat against Plymouth Albion in Round 22 now has them looking over their shoulder whilst a win for Leeds Tykes would significantly improve their chances of retaining their National One status.

Hull’s sensational charge towards the National Two North title continued last Saturday as 12 straight wins leaves them firmly in the driving seat to create history. The thought of promotion is edging closer and closer to becoming a reality and if they beat Rotherham Titans in Round 23, there may be some in East Yorkshire who will believe the battle for top spot is done and dusted.

However, this will be the biggest test of the season for Gary Pearce’s side. Hull have lost on just two occasions this term, one of which came against Rotherham at the end of October. The Titans come into this heavyweight contest nine points behind the league leaders with a game in hand and Adam Byron’s charges have won their last four matches since suffering a defeat against Fylde at the end of January.

Four years ago, Rotherham were in the second tier and Hull were plying their trade in North Premier so will it be the men from Chanterlands Avenue heading towards National One or will the Titans keep this title race alive.

How about another top of the table clash?! ??

It is first vs second in #Nat2n this weekend as Hull host Rotherham Titans in our Key Game on The National League Rugby Review Show ??

Access our coverage for the rest of the season for just £6 ?? https://t.co/UnmXIYjmgO pic.twitter.com/OwVtyNREAJ

Third-placed Sedgley Park are not necessarily out of the promotion picture just yet. Scott Barrow’s men sit 11 points behind Hull with a game in hand so you wouldn’t begrudge any Tigers follower if they wanted to see Rotherham collect a victory against the table-toppers this weekend. However, Sedge will be purely focused on their own job and they visit Luctonians aiming to extend their winning streak to six straight matches.

Elsewhere, the great entertainers Fylde (4th) host Blaydon and Stourbridge (5th) will be keen to bounce back from their recent defeats against Rotherham when they take on Wharfedale.

Esher’s promotion aspirations are back in their own hands as they sit just three points off the top in National Two South. After falling to successive defeats, last weekend’s win at Molesey Road over title rivals Redruth (2nd) has left them in control of their own destiny ahead of a mammoth meeting with new leaders, Clifton. It sounds simple, but win in Bristol on Saturday and Peter Winterbottom’s side will be in the box seat because they have a game in hand, but that does come against Worthing Raiders (4th) who they still have to play twice.

But of course, people reading this who are of a Clifton persuasion will be muttering ‘but what about us?’ They are right to say this because Matt Salter’s men could have easily felt sorry for themselves after losing to Redruth last month, but smashing victories over Old Albanian and Westcliff leaves them one point clear at the top with eight games left to play in their campaign.

This Saturday we pay tribute to the Man Mountain himself. Match vs @cantrugby.

??Dave loved orange so if you like we would invite you to wear a splash of the bright stuff??

Just to add an extra sub-plot to this ever-changing National Two South title race, that aforementioned game in hand of Esher’s against Worthing takes place in two weeks time so whilst the Eees can determine their own fate, so can the Raiders as they are currently level on points with their fellow promotion contenders. Eight straight victories has reignited their season and the Sussex outfit visit Barnes in Round 23 whilst second-placed Redruth play host to Guernsey Raiders.

Also this weekend, it is set to be a poignant day at Dry Leas when Henley Hawks take on Canterbury. Both clubs will be paying tribute to David Hyde, who tragically passed away at the beginning of the season. David’s family and friends will be in attendance on Saturday to hang his jersey on the wall in the clubhouse whilst Canterbury have shown their incredible support to Henley throughout the whole of this year.

Sadly, it will be an emotional afternoon at Barnstaple when they face Dings Crusaders. This week, Dings were left shocked and saddened by the sudden death of Sam Polledri. The 24-year-old represented the Crusaders, and his family also have deep connections with other clubs across the Bristol area, including Clifton. At both Pottington Road and Station Road (Clifton’s ground) this weekend, there will be a minute’s silence in Sam’s memory.