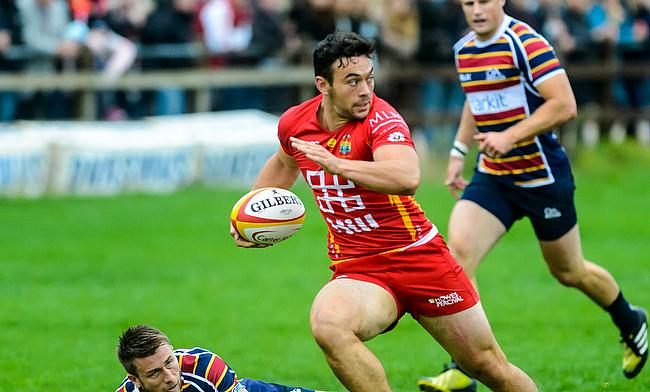 With the title and promotion all done and dusted for another year in National One, attention now turns to the relegation battle as we approach the final month of the campaign.

As we know, Fylde have already had their fate sealed, but there are still a number of teams who are a fighting for survival in English rugby’s third tier.

Currently, the final two relegation places are occupied by Loughborough Students and Old Albanian who both have work to do if they are to beat the drop. OAs take on Cambridge this weekend who themselves aren’t out of the woods just yet while the Students host Blackheath in the Midlands.

Just outside the drop zone are Hull Ionians. A run of four games without a defeat leaves them five points clear of the trapdoor and they can strengthen their survival bid when they visit Old Elthamians this weekend. The likes of Esher and Rosslyn Park may also be looking over their shoulders, but positive results against Fylde and Ampthill & District, respectively, would settle any nerves.

It was ‘mission complete’ for Coventry last weekend. The Midlands club wrapped up the National One title and promotion to the Championship after a superb victory over Caldy. It has been an outstanding campaign for Cov, but Director of Rugby Rowland Winter has called on his players to finish the season ‘in the right way’ as they aim to carry their momentum into the second tier of English rugby.

The newly crowned champions have lost just one of their last 33 matches, but they face a tough test this Saturday when they travel to Plymouth Albion. The hosts moved up to third in the table after their hard-fought victory over Bishop’s Stortford last weekend, but with the title now wrapped up, Albion will be aiming for consecutive second placed finishes. Kieran Hallet’s side are just five points off Darlington Mowden Park and they are also on a 16 match unbeaten run at Brickfields so despite the visit of an impeccable Coventry side, Albion will be feeling quietly confident that they can get the job done in Round 26.

Darlington Mowden Park knew the race for promotion probably ended after their defeat to Coventry last month, but they would have been pleased to halt a three match losing streak after beating Cambridge last week. Considering DMP finished 10th last season, ending this campaign in the silver medal spot would still be a superb achievement for Danny Brown’s men who will be looking to return to winning ways at the Northern Echo Arena this Saturday.

Last weekend, Bishop’s Stortford would have been frustrated as they fell to a narrow defeat to Plymouth Albion at Silver Leys so they will be hoping for a reaction when they take the 223-mile trip to Darlington this weekend. Andy Long’s side occupy eighth in the table in what has been an excellent season for Stortford since promotion from National Two South and after a difficult 2018 of just two wins in eight games, Stortford will be aiming to finish the season strongly and cement a place in the top half.

Ampthill and District weren’t in action last weekend as it was a round of rearranged fixtures, but Plymouth’s win over Bishop’s Stortford meant they fell to fourth in the table. This did seem inevitable due to the amount of games Albion have in hand, but finishing in second place is certainly not beyond Paul Turner’s side as they sit six points off Darlington Mowden Park and they have also lost just one of their last 10 matches.

The A’s latest victory came against Plymouth Albion so they will be looking to build upon that result when they visit Rosslyn Park in Round 26. Last time out, a cracking win over second placed Darlington Mowden Park certainly eased any fears of a relegation battle for Kieran Powers’ side as they moved 13 points clear of the drop after their victory at the Rock. They are back on their own patch this weekend so they will be hoping for a similar result against another one of the top sides in this division.

It has been a very good season for Blackheath as we approach the final month of the campaign. Since James Shanahan’s arrival from Old Albanian, ‘Club’ have continued to head in the right direction and a comfortable fifth placed finish looks on the cards with six games in their season left to play. Four wins from their last five matches has seen Blackheath strengthen their position in the top five and they can continue their good, recent form when they visit struggling Loughborough Students on Saturday.

“It was pretty frustrating and even now, I don’t feel like I proved myself. The next best move for me has been Loughborough."

The home side currently find themselves in the bottom three and five points from safety following a winless run of five matches. That hasn’t helped the Students as rivals Hull Ionians and Old Albanian have started to pick up points at this vital stage of the season, but Loughborough’s Callum Watson told us this week, his side are more than capable of beating the drop. A defeat to the aforementioned OAs in Round 25 was a significant setback for the Midlands club, but a first win for just under two months would certainly lift spirits in the Loughborough camp.

Since the start of February, Birmingham Moseley have been in excellent form. Just one defeat in six matches has lifted them to sixth in the table and Director of Rugby Richard Protherough told the Birmingham Mail last week, that his side already have an eye on next season. It was always going to be a transition period for the men from Billesley Common after the departure of Kevin Maggs and Protherough is certainly building something positive at Moseley as they prepare for a promotion bid next term.

For now, the focus will be trying to replicate their fifth place finish of last season and next up for Moseley is a visit to Caldy. The Wirral outfit were unable to spoil Coventry’s promotion winning party last Saturday as they were blown away by the new champions, but they have the chance to respond back at Paton Field this weekend. Overall, it has been a very successful season for Simon Verbickas’ men following promotion from National Two North last year and with Caldy currently sitting in ninth place, a first win in three matches would edge them closer to a top half finish in their first ever season at this level.

This Saturday, Old Elthamians are back in action looking to respond to their 48-13 defeat to Coventry which occurred in their last fixture two weeks ago. Four yellow cards cost them against Cov and coach Sam Howard is keen for his side to improve their discipline as they look to finish off a brilliant campaign in a positive fashion.

Gavin Lach’s side occupy seventh place in the table and considering this is their debut season in National One, it has been a wonderful effort from OEs. They will now be looking to cement their place in the top half when they welcome Hull Ionians to College Meadow with the visitors still fending off relegation. An unbeaten run of four matches, including vital results against the teams around them, means Alex Crockett’s side are five points clear of the drop as we approach the final month of the campaign. The I’s survived relegation last term, but can they do it again this season?

Despite sitting eight points clear of the bottom three, Cambridge Director of Rugby Ross Stewart has warned his side that they are embroiled in a relegation battle. The Blood and Sand slipped to a defeat against Darlington Mowden Park last weekend which was their fourth loss in a row, but after a decent end to 2017, the men from Volac Park seem to be looking over their shoulders.

Stewart has targeted their next two games to try and distance themselves from the drop zone and with Hull Ionians to come on Easter Saturday, first on the agenda is the visit of Old Albanian – a side which is certainly fighting for their survival. Three wins on the spin for Gavin Hogg’s men has given them a chance of avoiding a return to National Two South as they currently sit seven points off Hull Ionians. However, OAs have played one more game than the I’s so it is important for the Hertfordshire outfit to continue their good, recent form if they are to keep the pressure on their fellow rivals.

If Cambridge feel like they could be dragged into a survival scrap, then the same might apply to Esher who travel to already relegated Fylde this weekend. The Surrey outfit are eight points clear of the bottom three and back to back defeats against Bishop’s Stortford and Blackheath may have unsettled Esher, but they have the chance to move in the right direction when they visit Lancashire in Round 26.

Fylde’s relegation to National Two North was confirmed two weeks ago following their loss at Blackheath, but Warren Spragg and his side have taken a positive approach after their disappointment. The men from Woodlands have already recruited a whole host of players for next season as they aim for an immediate return to this division, but Fylde know they still have five fixtures to see out in National One and they will want to end this difficult campaign on the front foot ahead of next year.