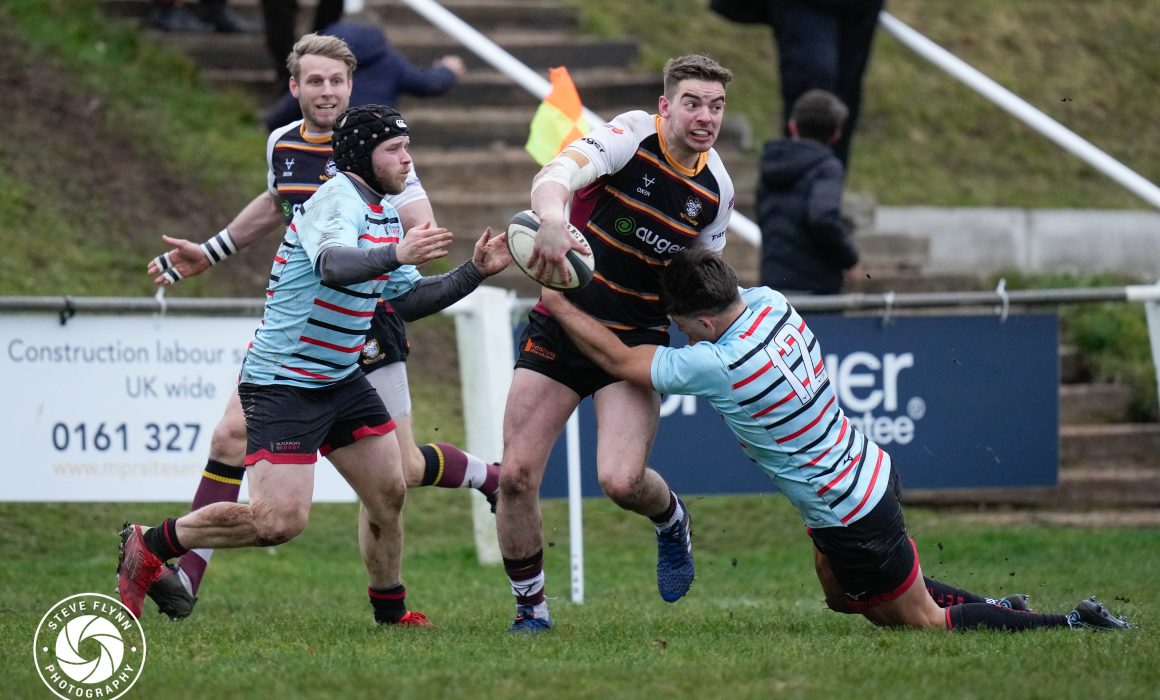 Blackheath boosted their own survival hopes with a cracking win over Rosslyn Park, Hull took a huge stride towards the National Two North title and Hinckley sting Worthing Raiders in the Midlands. (Photo Credit: Steve Flynn)

JJ Dickinson scored two tries as Caldy’s amazing season in National One continued with a 52-31 victory over Taunton Titans.

The hosts, who entered the weekend on a 12-match winning run, built an early 12-0 lead through Martin Gerrard and Oliver Hearn, but Taunton made life difficult for the table-toppers.

In fact, they were only 33-31 down with just over a quarter of the game remaining thanks to a brace from scrum-half Connor Banks, a penalty try and an effort from Hallam Chapman but the league leaders were able to race clear in the final 10 minutes.

Scores from Mike Barlow, Dickinson and Hearn were added to by the Caldy No.8, Ben Jones and Ezra Hinchliffe to ensure the Wirral outfit head into the final month of the campaign in pole position.

Caldy’s lead at the summit is now five points after second-placed Rosslyn Park suffered a 31-24 defeat to Blackheath.

Park still have a game in hand over Caldy, with the two sides set to meet at The Rock this coming Saturday.

The crowd were overjoyed by today’s performance. Should be fun in the bar. pic.twitter.com/M6wV4kSO9h

Club’s Jake Lloyd exchanged tries with Jared Saunders in the opening 15 minutes before Blackheath stunned the promotion candidates in a blistering first-half spell.

Harry Holland (2) and Lloyd again both crossed to hand the hosts a 24-5 advantage going into the break.

Hugo Ellis came off the bench to give Park the ideal start to the second period, but Blackheath didn’t sit back as Lloyd completed his hat-trick on 48 minutes.

Tries from David Lewis and Ellis did set up a tense finale at Well Hall, but Park had to settle for two bonus points whilst the maximum for Blackheath has moved them eight points clear of the drop.

Staying with the fight towards the bottom of the table, George Shannon’s try six minutes from time helped Darlington Mowden Park secure a potentially crucial 22-20 victory over Tonbridge Juddians. Back-to-back wins for Garry Law’s side means they are now 11 points above the relegation places whilst TJs, who currently prop up the division, are 19 points from safety with five games remaining.

Elsewhere, Leeds Tykes were able to secure a bonus point in their 36-27 loss to Chinnor – with Harry Jukes claiming their fourth try – whilst Plymouth Albion also concluded Round 25 with one point after a 48-24 defeat against an in-form Cambridge outfit.

Meanwhile, a double from Will Roberts helped Bishop’s Stortford clinch a welcome 29-17 win away at Birmingham Moseley and Cinderford made it five victories from their last six outings after beating Rams RFC 38-17, with hooker Nathan Taylor scoring four for the Foresters.

Hull were able to take another step towards the National Two North title after emerging as narrow 24-19 winners from their top of the table clash with Sedgley Park.

The Yorkshire outfit flew out of the blocks with tries from Mike Adlard and Keane Naylor, and Hull held their 14-0 lead till the break.

Sedge then delivered a one-two punch as John Blanchard and Matt Riley levelled things up in a four minute window, but Reece Dean was able to hand Hull the lead once more from the tee.

The home fly-half then missed the target with another penalty attempt, but it wasn’t to prove costly as Will Hall’s try on 68 minutes gave Hull some breathing space.

Their 10 point advantage didn’t last long though as the deadly Rhys Henderson crossed for Sedge, however Hull held on to their 12th successive home win but more importantly, they overcame another huge hurdle in their quest for promotion.

Nothing is signed, sealed and delivered just yet and Hull will be the first to admit that after Rotherham Titans made sure the table-toppers remain only six points clear after they beat Tynedale 47-31 in the North East.

Jamie Cooke went in for an early first try for Rotherham before a Richard Hayes penalty was followed by further scores from Connor Field and George Tucker.

Seamus Hutton got one back for Tyne, but Field’s second kept the Titans in control shortly after half-time.

However, Will Miller and Robert Parker (2) scored for Tynedale to cut the deficit to 10 points with 12 minutes remaining but after Tom Lewis and Ben Bell had swapped tries, Rotherham were able to wrap up the win when Hayes pinged over his third penalty of the afternoon before Field completed his hat-trick.

Elsewhere in Round 25, the centre pairing of Joe Heatley and Immanuel Feyi-Waboso both scored twice as Stourbridge racked up a 61-24 victory over Bournville in the Midlands derby whilst Hull Ionians came out 45-36 winners in an entertaining contest against Fylde and Luctonians hammered Blaydon 43-0.

Also across the division, John Craven’s late try sealed a dramatic 17-16 victory for Chester over Wharfedale, who had two players sent off in the final minute at Hare Lane, whilst Sheffield Tigers beat Huddersfield 33-13 and Loughborough Students secured their first victory since January and did so in some style as they defeated Harrogate 55-0.

Fraser Wem and Charles Crawley both scored twice as Esher battled to a 40-31 victory against Old Albanian to remain in control of the National Two South title race.

Wem’s double came inside the opening 10 minutes before David Coutts and Crawley crossed to give the visitors a 26-0 lead.

But their comfortable cushion was reduced either side of half-time as Tom Stileman (2), Harry Samuel and Ashley Illston all went in to bring an injury-hit OA’s right back into this contest.

However, Esher were next to burst into life as Cameron Wilkins and Crawley touched down and despite Dan Watt going over for the home side with two minutes remaining, the league leaders had done enough to secure a fifth straight win.

Redruth were able to keep the pressure on the table-toppers after Steele Barker and Shaun Buzza both collected doubles in a 49-10 victory against Canterbury whilst Clifton are also still in the promotion hunt after a stunning opening 20 minutes helped them to a 47-34 triumph over Bury St Edmunds.

The only side in the top four who weren’t victorious on Saturday were Worthing Raiders who fell to a 31-26 defeat away at Hinckley.

The Hornets, who also beat Esher at Leicester Road last month and have now done the double over Worthing, were level at half-time thanks to tries from Joe Wilson and Euan Kelly but they had to battle back on each occasion after Matt McLean and Jack Forrest went over for the away side.

Hinckley added tries through Ben Pointon and Kelly to secure the bonus point and the latter then sealed his hat-trick as the hosts threatened to run away with it.

Kemp Price and Harrison Sims did make sure Worthing left the Midlands with two bonus points, but successive defeats have slightly dented the Raiders’ promotion chances.

Elsewhere in National Two South, Henley Hawks were beaten 27-24 at Dry Leas by Rochford Hundred, who were reduced to 14-men when Najee Mundicha was sent off nine minutes from the end, whilst Leicester Lions made it 10 home wins on the bounce after dispatching Barnstaple 36-5.

Also on Saturday, Fin Doyle’s sensational first home start for Westcliff didn’t have a fairytale ending as the 17-year-old’s hat-trick was cancelled out by the five tries which Guernsey Raiders scored in a 27-26 win whilst it is five victories in a row for Dings Crusaders after they beat Barnes 30-23 in the capital.