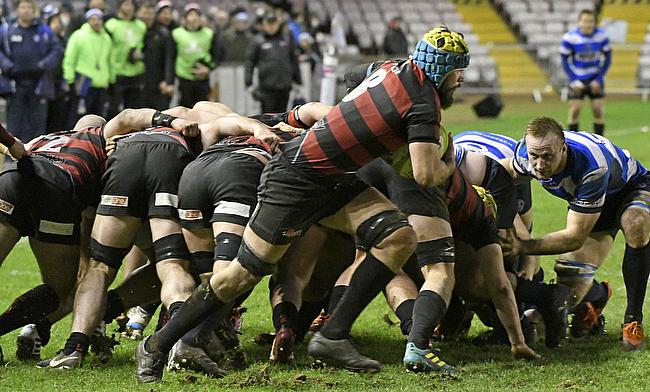 Blackheath are the new leaders in National One after a bonus-point victory against Darlington Mowden Park following another brilliant weekend of action. Photo Credit: Andy Hall

‘Club’ are now one point clear at the top after Rosslyn Park lost to promotion rivals Old Elthamians, but both of these sides are hot on the heels of Blackheath in this remarkable title battle.

Added to this, Ampthill and District are also one point behind James Shanahan’s side after dispatching Plymouth Albion in Round 18 while Rotherham Titans and Chinnor are very much in the running for top spot after victories over Birmingham Moseley and Caldy, respectively.

At the wrong end of the table, Esher have fallen into the bottom three after losing to Cambridge while Bishop’s Stortford boosted their survival hopes as an excellent win against Sale FC moved them off the foot of the division.

Elsewhere, Cinderford are up to seventh after defeating Loughborough Students, but there is only six points between Paul Morris’ side and the relegation places.

Blackheath produced a brilliant second half fightback as they defeated the 14-men of Darlington Mowden Park to return to the summit of National One.

Shaun McCartney opened the try scoring for Darlington before Matt Heaton also dotted down to give the hosts a 14-3 lead at the break.

However, Blackheath responded as Elliot Clements-Hill went over and soon after, ‘Club’ were awarded a penalty try as the visitors nudged themselves in front.

Warren Seals’ penalty did tie the game up, but the pendulum swung in Blackheath’s favour when DMP’s Ignas Darkintis was sent off just before the hour.

The away side took full advantage of the extra man as Markus Burcham and Jake Lloyd both scored to put James Shanahan’s side in charge.

With a few minutes left, Chris McTurk went over for DMP and despite their best efforts, the hosts couldn’t snatch the win as Blackheath left the North-East victorious.

After two defeats in a row, Old Elthamains responded in style as they saw off title rivals Rosslyn Park at College Meadow.

Despite Oli Groves’ early score, OEs bossed the majority of the first half with tries from Harry Ledger and Tom White.

Another penalty from White gave OEs a positive start to the second period, but tries from Adam Frampton and Charlie Amesbury closed the gap to six points.

However, despite waves of pressure from Park in the final 10 minutes, OEs hung on for the victory which leaves them one point behind leaders Blackheath.

Promotion challengers Ampthill and District are now just one point off the summit as a superb second-half display helped them beat Plymouth Albion.

A try from John Kelly gave the away side the perfect start, but the A’s led 15-8 at the interval thanks to Ollie Walliker’s effort and a penalty try.

Albion begun the second period with their own penalty try, but the A’s then took control of proceedings as they scored 33 unanswered points.

Will Allman, Mikey Waters, Spencer Sutherland and Sam Baker (2) all scored to seal the win for the hosts as they strengthened their title bid at Dillingham Park.

Zak Poole scored a last-gasp try as Rotherham Titans reignited their promotion push with a thrilling victory over Birmingham Moseley.

My word! This league has it all. @RotherhamRugby have taken ‘last-gasp winner’ to a whole new level! ??

it came down to a converted try in the 12th minute of added time to sneak a 21-20 victory over @MoseleyRugbyFC!

The visitors led when Roach grabbed his second and despite Connor Dever going over, a penalty from James Williams had Moseley one point ahead.

Roach then completed his hat-trick to increased Moseley’s advantage, but the Midlands club saw the victory snatched away from them as Poole scored in the 12th minute of added time to seal a win for Rotherham which leaves them six points off the top.

Chinnor moved to within six points of leaders Blackheath as Craig Holland inspired his side to a victory over Caldy.

Yet again, Matt Williams’ men were on the right side of a narrow scoreline and the Black and Whites are very much in the promotion conversation in National One.

An early three points from the boot of Ben Jones saw Caldy take the lead, but two penalties from Holland and a converted try by the fly-half put the visitors 13-3 up at the break.

The hosts hit back just after the hour as tries from Rhys Hayes and Josiah Dickinson gave Caldy the advantage, but Holland delivered once again as his second score of the afternoon clinched the win for Chinnor.

Cinderford held off a Loughborough Students fightback to secure victory in a thrilling contest at Dockham Road.

Tries from Alex Frame, Nathan Taylor (2) and Sam Smith helped the home side into a 24-14 lead at half-time, with Loughborough’s Thibaud Flament scoring a brace.

Toby Dabell and Students’ Alex Glashan exchanged scores after the break, but Tom Bozzard and Jack Hayes both went over for Cinderford to make it 45-19.

But the visitors scored three tries in the final seven minutes to secure a bonus-point as Flament completed his hat-trick while Jack Moates and Harry Mahoney also crossed to conclude a pulsating encounter in Gloucestershire.

After Jake McCloud had opened the scoring for the hosts, Esher hit back thanks to tries from Karim Irving and Graham Logan which gave the away side a 10-7 half-time lead.

Paul Roberts’ penalty put Esher further ahead, but Ean Griffiths and Kwaku Asideu both dotted down to give Cambridge the advantage.

Roberts then crossed as Esher got within a point of their hosts, but Meek’s late effort sealed the victory for Richie Williams’ side, who are now six points clear of the drop zone.

Bishop’s Stortford enhanced their survival bid in National One as they clinched a vital victory against the 14-men of Sale FC.

A penalty from Tom Banks and James Apperley’s try helped Stortford into a 10-0 lead before Simon Griffiths replied before the break.

Congratulations to @BSRUGBY for their fantastic 29-15 win against Sale RFC this weekend! Here’s some fantastic action shots of Charlie Kingham, our sponsored player from highly recommended photographer @AndyToddPhoto pic.twitter.com/tK4YIDTyVA

However, Sale had Connor Doherty sent-off on the stroke of half-time for a dangerous tackle, but that didn’t seem to affect the visitors as they took the lead after the interval following Dan Birchall’s try.

Matt Bradley’s penalty extended Sale’s advantage to five points, but the home side sparked into life with 13 minutes remaining as Rob Duff, Nick Hankin and Jack Scantlebury all crossed to secure a crucial victory for Stortford, which leaves them six points from safety.