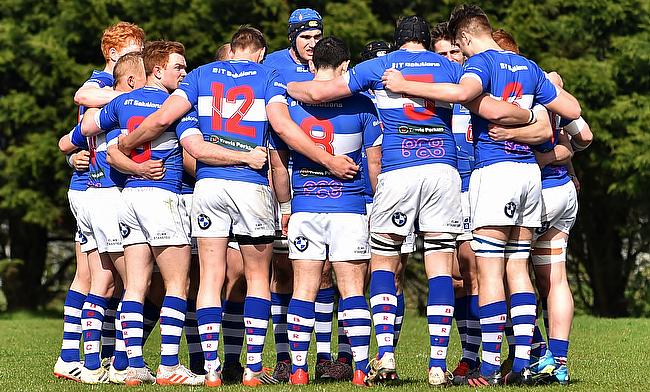 League leaders Coventry will be confident that they can secure their 10th consecutive victory of the campaign when they face Caldy on Saturday.

Cov enter Bonfire weekend seven points clear of second placed Darlington Mowden Park, who travel to Esher this Saturday. Rowland Winter’s side are the only team in the division yet to suffer a defeat this season and they are favourites to extend their winning start at Butts Park tomorrow.

Also in the top-half, Plymouth Albion and Blackheath will be aiming to bounce back from defeats when they take on Rosslyn Park and Bishop’s Stortford, respectively, while two form sides in National One clash at Dillingham Park as Ampthill & District host Old Elthamians.

Elsewhere, Birmingham Moseley host Loughborough Students, Cambridge go to Hull Ionians and there is an interesting clash at the bottom as Fylde travel to Old Albanian.

Table toppers Coventry face a new challenge this weekend as they welcome Caldy to Butts Park Arena for the first-ever meeting between the sides.  Cov have been sensational so far this season and enter November having won all nine of their matches and they currently hold a seven point lead at the summit of the National One table.

Rowland Winter’s men set a new club record of 17 straight victories last Saturday after their triumph over Cambridge and the Midlands side will now be aiming for their 19th win from their last 20 home league matches. Caldy’s task is a daunting one and the National Two North champions will up against it this weekend. In addition, Simon Verbickas’ men currently have the worst form in the league having lost their last six matches. The Wirral outfit have not tasted victory since the 16th September so they will be hoping to reignite their campaign on Bonfire weekend.

Second placed Darlington Mowden Park travel to Esher this weekend and both sides will be in a buoyant mood. The visitors left it late, but picked up a superb win against Plymouth Albion in Round Nine as they bounced back from a defeat at Blackheath to move into the top two. Danny Brown’s side now take the long trip to Surrey having lost their last two matches on their travels so they will be aiming to put a halt to that run this Saturday as they look to keep Coventry in their sights.

That won’t be straightforward for DMP as Esher come into the clash after a much needed win against Blackheath. The men from Moseley Road arrested a run of six straight defeats and yet again it was a home triumph which ended a poor sequence of results. All three of Esher’s victories this term have come on their own turf so they will be quietly confident that they can overturn another top side in the division.

It was only Plymouth Albion’s second defeat in 22 matches, but their loss to Darlington Mowden Park was certainly an unwanted dent in their possible promotion ambitions. Their late heartbreak now leaves Kieran’s Hallet men nine points behind rampant league leaders Coventry, but Albion have more than enough quality to keep up the chase.

They now head to London this weekend aiming for their first win in three weeks. Their hosts, Rosslyn Park, have started to show shoots of recovery over the last couple of rounds which have come in the shape of home victories. Kieran Power’s men have beaten Caldy and Loughborough Students at the Rock over the last month and with Plymouth perhaps still licking their wounds from that defeat at Darlington, Park may fancy taking a scalp this Saturday.

Ampthill and District responded from their surprising defeat to Cambridge by putting a solid performance away at Caldy to clinch their fifth win in six matches. The A’s are fourth in the table and 10 points off league leaders Coventry as they prepare to welcome Old Elthamians to Dillingham Park this weekend.

The visitors are certainly enjoying life in National One. After victory over Sale FC in the National Two play-off back in May, Gavin Lach’s side find themselves seventh in the table as we begin the third month of the campaign. I would think that OEs are very pleased with their start to the season and they head to Bedfordshire having lost just one of their last five matches. They also held Plymouth Albion to a draw in their last away fixture so OEs will be aiming for a similar performance this Saturday.

Fifth host sixth in National One this weekend when Bishop’s Stortford take the trip to Blackheath. The home side described their defeat to Esher last Saturday as their ‘worst performance’ under James Shanahan and he and the rest of the squad will be desperate for a reaction at Well Hall tomorrow.

Club’s four game winning streak was ended in Round Nine and a side with ambitions of stretching their own run to four matches is Bishop’s Stortford. Andy Long’s men sit four points behind Blackheath after producing a superb start to their time in National One. The current National Two South champions have certainly shown their qualities so far this term – especially on the road where they have lost just once – so they will be keen to continue their good form on their travels tomorrow.

Very seldom do you see a team in sport which has a better away record than home, but this season that applies to Birmingham Moseley. The Midlands side were excellent at Billesley Common last term however in this campaign; three of their four victories have come on the road, including their last win against Fylde.

The aforementioned triumph in Lancashire moved Richard Protherough’s side into the top half after a very mixed opening two months of the season, but now they will be aiming for back to back victories for the first time since the beginning of April. However, ahead of November 5th, Loughborough Students finally sparked their season into life last Saturday with a dominant display against Hull Ionians. Students now find themselves six points from safety following just their second win of the season, but victory in this Midlands derby would be the perfect way to begin the new month.

Last weekend’s loss to Loughborough Students would have been massively frustrating for Hull Ionians. After a comfortable victory over Fylde in Round Eight, the I’s failed to capitalise against one of their fellow strugglers and unfortunately, it was one step forward and two steps back for the men from Brantingham Park.

The Yorkshire outfit remain in the relegation places, but they are still only three points from safety as they prepare for the visit of Cambridge this weekend. Both the I’s and Cambridge finished directly above the drop zone and on 58 points last term, but the Blood and Sand are having a much stronger season this time around. Ross Stewart’s men head north this weekend currently occupying ninth place and they will be aiming for a third win in four matches.

Just over a month ago, victory against Rosslyn Park was exactly what Fylde needed to kick start their season, but the Lancashire side have been unable to build on that win in Round Five. Instead, Warren Spragg’s side come into this weekend’s clash with Old Albanian on a run of four straight defeats and they are already 11 points from safety.

In fairness to the men from Woodlands, they did face two of the current top four in October so this fixture with 12th place Old Albanian could present them with a great chance to start manoeuvring themselves away from danger. OAs are three points clear of the drop, but back to back home wins against Esher and Darlington Mowden Park will give Gavin Hogg and his side confidence that they can once again gain the desired result at Woolams this weekend.