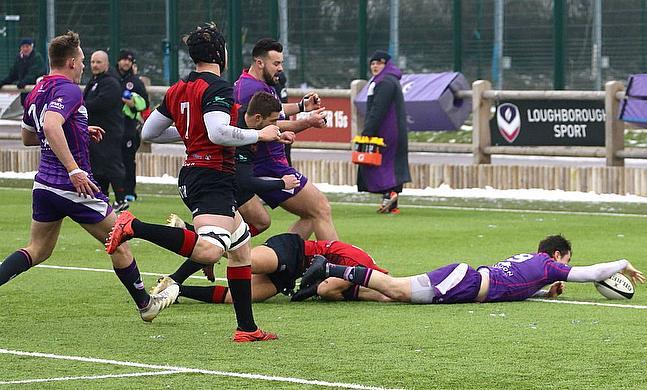 Esher, Birmingham Moseley and Loughborough Students all secured excellent victories on a dramatic weekend at the bottom of the National One table.

Both Esher and Birmingham Moseley moved out of the relegation places following wins over Sale FC and Plymouth Albion, respectively, while Loughborough are just three points from safety after a superb victory against Chinnor.

It means the aforementioned Plymouth Albion as well as Bishop’s Stortford are now in the drop zone, with Stortford losing narrowly to league leaders Blackheath in Round 13.

Blackheath hung on to win by a single point as they narrowly beat Bishop’s Stortford thanks to a late Joe Tarrant penalty.

Three points from the boot of Tarrant and a try by centre Henry Staff from close-range had established a 10-0 lead for Club.

Tom Banks and Tarrant exchanged penalties before three more successful kicks from the Stortford scrum-half brought the visitors to within one point of Blackheath at half-time.

Banks’ fifth penalty edged Stortford in front and Andy Long’s men led until the 75th minute, but a powerful scrum from the home side resulted in a penalty which Tarrant nudged over to extend Blackheath’s unbeaten run to seven matches.

Old Elthamians are level on points with Blackheath once again as they crushed Caldy in a bonus-point win at College Meadow.

The home side put themselves ahead with scores from James Golledge and Charles Dockery only after Caldy had taken the lead following a penalty try.

However, after the break, George Messum, Alex Brown and Rhys Morgan all went over to wrap up the bonus-point for OEs, while Ollie Claxon also landed a penalty.

A first-half try from Benji Marfo proved to be the difference as Rosslyn Park moved up to third in the National One standings following this win over fellow promotion candidates Ampthill and District.

A tidy finish from Marfo combined with the boot of Greg Lound and some resolute defence held Ampthill out at The Rock.

The hosts were scoreless in the second-half and a penalty from James Prichard shortly after the interval gave Ampthill a foothold in the match.

Park continued to hold firm in defence, but they did concede a penalty with three minutes remaining. However, the A’s went for the posts rather than the corner and ultimately, they weren’t able to fashion another clear-cut chance to snatch the win.

Loughborough Students’ recent resurgence continued with a victory in a pulsating National One contest against Chinnor.

The visitors led by five points at half-time courtesy of a Reon Joseph try, after Thibaud Flament, Victor Keunen and Harry Priestner had crossed for Loughborough, and Greg Goodfellow and Craig Holland (2) for Chinnor.

After the break, Will Attfield’s effort plus another score cancelled out a second try for Joseph.

Both sides then exchanged tries, with Oskar Hirskyji-Douglas going over for Loughborough, before a Chinnor penalty put them 46-45 in front.

But Charlie Reed’s boot proved to be decisive as his penalty three minutes from time helped Loughborough secure their third win of the campaign.

Rotherham Titans returned to winning ways at Clifton Lane as they out-muscled Cinderford in Round 13.

Harry Dunne barged his way over the line to give Rotherham the lead in the first half before the centre grabbed his second and Alex Dolly landed a penalty to complete the win for the Titans.

Cinderford could only muster up three points via the boot of Liam Hemming as the Foresters fell to successive defeats.

Nana Asiedu scored a brace as Cambridge put in an excellent display against Darlington Mowden Park to secure a third win from their last four matches.

A superb break from Asiedu led to the visitors’ first try after Jack Green had landed an earlier penalty for Cambridge.

Gary Law kicked the hosts’ only points, while Steve Hipwell crossed after using a series of drives to his advantage before Asiedu collected a high ball to seal the win for the Blood and Sand.

Esher withstood a second-half fightback from Sale FC to move out of the bottom three in National One thanks to this victory at Heywood Road.

A try and a penalty from Paul Roberts plus two other scores put Esher in control in the North-West.

The visitors dotted down on two more occasions soon after the break and Roberts landed his second penalty, but Sale scored four tries following earlier efforts from Paolo Odogwu and Elliot Hodgson.

Plymouth Albion dropped into the bottom three of National One as Birmingham Moseley moved out of the relegation places following back to back wins.

Albion came into this game having lost their last four matches and things didn’t get much better for Kieran Hallett’s men in the Midlands.

They were left facing an uphill task when they conceded a try inside the opening minutes as James Williams crashed over.

Birmingham Moseley had led 27-0 before Plymouth got themselves on the board as scores from Cameron Setter, George Mills and Matt Shepherd cut the deficit to eight points.

However, the visitors could only manage a late Ashley Crouch score to claim a bonus-point, but it is now no win since the middle of October for Albion.