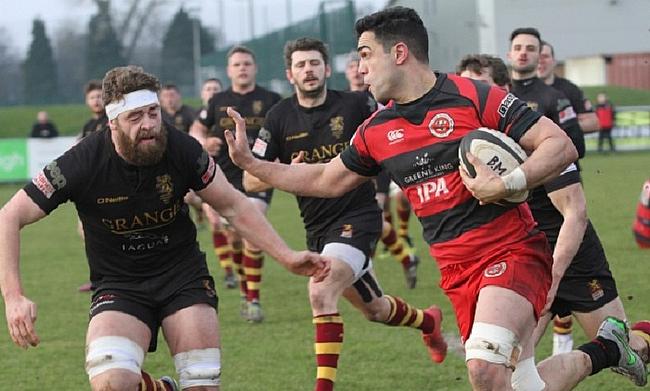 At this time of year, the usual protocol is for people to be generous but when sport is played just days before Christmas, that festive spirit takes a back seat.

In National One, it is no different as many clubs travel the short journeys to teams nearby as they aim to enter the winter break on a high.

At the top of the division, Coventry will be raring to go once again after their top of the table encounter with Darlington Mowden Park was postponed last week and they will have their sights set on a 15th straight win as they look to strengthen their position at the summit.

Trying to keep Cov in touching distance is the aforementioned Darlington who host Hull Ionians as they look to reduce the 13-point gap between themselves and the league leaders. Elsewhere in the top half, Plymouth Albion go to Esher, there is a London derby between Blackheath and Rosslyn Park while Bishop’s Stortford & Old Elthamians clash at Silver Leys.

Down at the bottom, Fylde will be aiming to claim a home victory over Caldy while Old Albanian face a tricky test against Ampthill & District and Loughborough Students host Cambridge.

As the Christmas derbies take place up and down the country this weekend, National One league leaders Coventry will be itching to return to action when they travel the short distance to Birmingham Moseley. Cov’s top of the table clash with Darlington Mowden Park was postponed last weekend due a frozen pitch, but Rowland Winter’s side have the chance to make it 15 straight wins for the season at Billesley Common this Saturday as they look to continue their remarkable campaign.

This weekend we take on local rivals @MoseleyRugbyFC, a rivalry dating back to the late 1800's ?

The hosts Birmingham Moseley are having a steady season thus far but, the festive period has not been an enjoyable one for Richard Protherough’s side as after four straight victories across October and November, Moseley have lost both of their fixtures this month. The Midlands club are currently eighth in the table and a victory against a side that hasn’t lost a league fixture for 10 months would be the perfect early Christmas present.

Despite not playing last weekend, Darlington Mowden Park remain second in the table and they head into the final game of 2017 still with Coventry in their vision. Granted, the league’s frontrunners are starting to disappear from sight, but DMP are 13 points behind them and Danny Brown’s side will just continue to focus on their own job as they look to hunt down Cov.

Next on their agenda is the visit of Hull Ionians. Darlington have won all seven on their home fixtures whilst the I’s have lost all seven of their matches on their travels. Their latest defeat on the road against Ampthill and District last weekend saw the Yorkshire club slip back into the bottom three, but Alex Crockett’s men are only one point from safety. It wouldn’t quite be a ‘Christmas Miracle’ if Hull Ionians were to secure the win this Saturday, but it would certainly be an upset in the northeast.

Plymouth Albion jumped into third place last weekend following a solid display against Old Albanian and it looks as though Kieran Hallet’s men have now recovered from their dip in form. A run of just one win from five matches saw them fade away from any promotion talk, but three wins from their last four games has seen Albion respond well.

Their win last Saturday meant that Albion finished the year unbeaten at home and now they will be aiming to end 2017 on a high when they travel to Esher. Plymouth are just three points off second placed Darlington, but gaining a result at Esher is never easy. The Surrey side might have won just one of their last five matches, but all five of their triumphs this season have come at Molesey Road. However, Esher are sitting 10th in the table and are just five points clear of the drop zone so a win against Plymouth would be a nice way to enter the Christmas break.

Ampthill and District Head Coach Paul Turner stated last week that his side needed to respond from their loss to Coventry in Round 14 and the Bedfordshire club reacted well as they clinched a welcome victory over Hull Ionians. That win was Ampthill’s first triumph for just under a month and it leaves them in fourth place, but all three teams above them have a game in hand.

Turner’s men end another positive year with a fixture against a side struggling at the wrong end of the table; Old Albanian. OAs have had a run of tricky matches since the start of December and that really hasn’t helped their form. The side from Woolams have now lost their last seven games which means they sit 15th in the table and nine points from safety heading into 2018. Can OAs pick up their first win since October this weekend?

Round 16 signifies the beginning of the second half of the season and both Blackheath and Rosslyn Park have had contrasting fortunes since they last met in the second weekend of September. Blackheath currently sit fifth in the table after another mixed campaign and nine wins and five losses does highlight that. After victory over Park in Round Two, James Shanahan’s side have struggled for positive consistency, but the men from Well Hall may well be satisfied with their progress thus far.

Its nearly Christmas put we have one more game before the big man arrives, a local derby against @Blackheath_1858 on Saturday (3PM Kick off)

They host their London counterparts Rosslyn Park this weekend, but while ‘Club’ are at the right end of the table, Kieran Power’s side are at the opposite end of the spectrum. Park are embroiled in a relegation battle as things stand and have been for the last couple of months, but a vital win over Birmingham Moseley last Saturday has lifted them out of the bottom three and they are a point clear of danger heading into this clash in the capital. Park’s aim is to now secure back to back wins, something they haven’t managed since March.

Both Bishop’s Stortford and Old Elthamians will be absolutely delighted with the way their respective seasons have gone following promotion to National One in the spring. The hosts, Bishop’s Stortford, stormed to the National Two South title and have just continued their momentum in this division as they currently sit sixth in the table and they have lost just twice in the beginning of October.

Stortford have won just one of their last four games, but they have the chance to end an historic year by beating their old foes, Old Elthamians. OEs sit just three points behind Stortford heading into this fixture, but it has also been a remarkable rise for the men from College Meadow. This month, they have once again showed their class with three straight victories and a win at Silver Leys this Saturday would round off a special year for Gavin Lach’s men.

Last weekend, Dan Lewis’ last-gasp penalty saw Cambridge snatch victory against Bishop’s Stortford and for the Blood and Sand, they will be very pleased with how things stand heading into 2018. After a campaign of flirting with relegation last season, Ross Stewart has guided his side to ninth in the division and they are 11 points clear of the drop zone.

We might have praised a whole host of other teams this term, but Cambridge deserve credit as do their hosts this weekend, Loughborough Students. Cambridge have won three of their last five games, but the Students have been going along very nicely as well. Just one defeat since the start of November has seen the Midlands club move out of the drop zone and up to 12th in the league. Considering the bottom half of this table is so tight, Loughborough will be aware that all this positive momentum can quickly disappear and a fifth straight home win would be the ideal way to enter 2018.

A northwest derby will be on show this weekend in National One as Fylde take on Caldy at Woodlands. The home side on Saturday currently sit bottom of the division ahead of the final game of the calendar year, but spirits remain high at the club. Both Chairman Michael Brennand and captain Greg Nicolls were positive when speaking to BBC Radio Lancashire in the week and they will have to keep believing they can overturn a 10 point deficit as they look to battle to safety.

“It’s nice to know that they trust in the vision I’ve got going forward”@fylderugby head coach @spraggio – pic.twitter.com/WccnufKIRU

Caldy take the trip via the M6 to Fylde buoyed by their recent form. Three wins from their last five games has seen the Wirral outfit move away from danger, but despite sitting 11th, they do remain just five points clear of the relegation places. All three of those aforementioned victories for Caldy have occurred at Paton Field, with their last away win coming in September when they triumphed over Loughborough Students. Simon Verbickas’ men did beat Fylde 37-19 earlier in the year and they will be aiming for repeat of that result in Round 16.