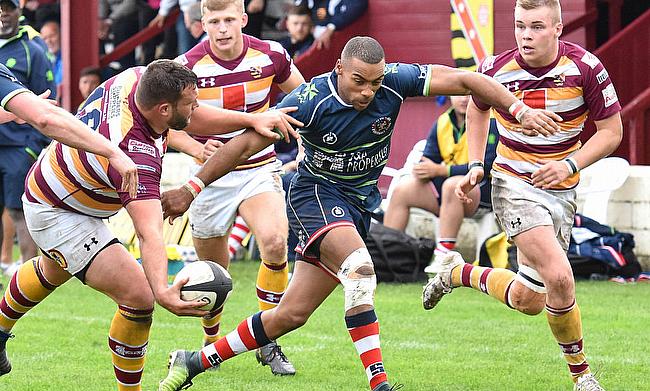 After a tough month for new head coach Warren Spragg, Fylde ended September by securing their first win of the season against Rosslyn Park.

The Lancashire side had struggled in the first four rounds, but an excellent display in front of their own supporters will give everyone at the club a much needed boost heading into October.

Also heading into the second month of the season in a positive frame of mind are the division’s top two. Both Darlington Mowden Park and Coventry made it five wins on the spin while the likes of Plymouth Albion and Blackheath remain hot on the heels of the early pace setters.

Elsewhere in Round Five, Ampthill and District picked up a good win away at Bishop’s Stortford, Old Elthamians maintained their excellent recent form and Birmingham Moseley secured victory on the road against Old Albanian.

Darlington Mowden Park earned a fifth National One victory in a row but they had to battle to overcome a spirited Caldy at the Northern Echo Arena.

Caldy played their part in a superb game and deserved to take two points from this contest, which saw them stay in the top half of the table.

But Shaun McCartney (2), Callum Mackenzie and Gary Law’s tries gave the hosts a valuable bonus-points victory to leave them at the summit.

Coventry ended a perfect September with a nine-try win as they outclassed Esher at Moseley Road.

The visitors were excellent in all departments and they were on course for their 13th successive National One victory thanks to first half scores from James Stokes, Phil Nilsen, Pete White, Tom Emery and Will Maisey, plus a penalty try.

Esher were struggling to keep pace with Cov as Stokes and Rob Knox (2) went over after the break, Maisey impressing with 14 points from the boot.

Plymouth Albion produced a strong second half display to clinch their fourth straight victory as they beat Loughborough Students.

Jamie Salter’s try gave Albion an early lead, but the Midlands crowd saw their side hit back as Joakim Antoniou and Max Hill crossed to put them in front.

The game ebbed and flowed for the rest of the half as Will Norton and Salter dotted down for the visitors, either side of a Callum Lynch score as the game was level at 21-21 at the break.

Seta Raumakita and Dan Mugford gave Albion a cushion after the interval with tries number four and five, but Students, who had been down to 14 men, kept themselves in this contest as Tim Bitirim darted over.

However, Albion did the damage late on as Jake Arnott grabbed a brace to seal the win.

A double from Blackheath full-back Leo Fielding helped his side cruise to victory against Hull Ionians at Well Hall.

Fielding scored one in each half as the hosts’ romped to an eight-try win to secure their fourth triumph of the campaign.

Bishop’s Stortford’s recent good form suffered a blip as they were beaten by an improving Ampthill and District side.

The game contained eight tries in an action-packed encounter, but this contest was firmly in the balance at half-time.

Hooker Alex Luti scored the only try of the half for the A’s with James Prichard landing eight points, while Nick Hankin crossed for Stortford as the hosts trailed 13-10 at the break.

Ampthill then took control of this encounter following the restart. Elliot Reeder and Alex Woolford dotted down before Stortford were given a lifeline as Chris Smith capitalised on a sloppy offload to cut the away sides’ lead to 12 points.

But the A’s started to the turn the screw and ultimately sealed victory when Kevin Barrett and Josh Sharp darted over, but Stortford did have the final say as Dan Leo crossed late on.

Dom Lespierre starred in a National One contest full of attacking prowess as Old Elthamians edged out Cambridge at Volac Park.

The wing scorched the Cambridge defence on two occasions in the first half to help his side lead 21-7 at the break, with Jay Rudland-Thomas also going over for OEs while Pierre Peres dotted down for the hosts.

Good hands from OEs helped set-up Lespierre for his hat-trick, but Gavin Lach’s side had to be resolute after scoring their fourth try of afternoon as they were reduced to 13 men.

Truman Sullivan and Harry Ledger were both sin-binned and the Blood and Sand took full advantage as Shane Moynihan and Joey Williams crossed for converted scores.

However, their fightback was scuppered on 76 minutes as Tom White landed a penalty, while late try by Oli Petrides, earnt the hosts two bonus points.

Birmingham Moseley made it back to back away wins as they beat Old Albanian in Herefordshire.

Sam Lunnon put OAs in front on 23 minutes, but Chris Brightwell cancelled out that try to make the score 7-7 at the break.

However, two quick-fire tries from Josh Jarvis and Brightwell put Moseley in control right at the start of the second period and a score from Sam Pointon just after the hour gave them breathing space.

Two more tries for the visitors effectively gave them the five points, but scores from Alex Post and Lunnon clinched a bonus point for the home side.

Fylde secured their first win of the season as they came from behind to beat Rosslyn Park at Woodlands.

The home side led 16-10 at the break thanks to tries from Tom Grimes and Chris Briers, but Park kept in touch with Fylde following a Daniel Barnes try and five points from the boot of Steve Leonard.

Leonard added two more points to his tally shortly after the restart as Henry Spencer darted over to give the visitors the lead.

Greg Smith and Leonard then exchanged penalties, but on 72 minutes Fylde scored the decisive try through Henry Hadfield who raced into the corner to touchdown.

And the game was wrapped up right at the death as Tom Carlton sprinted over to seal Warren Spragg’s first win as Fylde Head Coach.