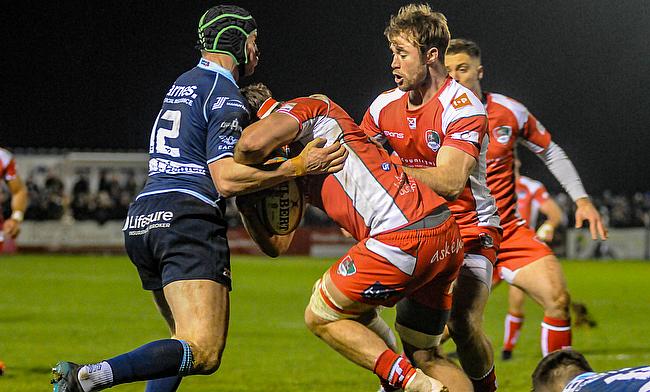 The former Coventry centre has recently become Cambridge’s new defence coach after retiring from playing at the age of 27. Photo Credit: Nick Meredith

“For me it wasn’t a hard decision to make,” says Heath Stevens, almost before the question has finished. The question is about his choice to retire from rugby at the age of 27 and whether there were any doubts in his mind about hanging up the boots.

The former centre announced his retirement from the sport earlier this year, partly due to the wear and tear his body has suffered, but also because he wanted to follow a different path in the sport.

Stevens has now traded the Saturday afternoons with Coventry in the Championship to pursue his coaching aspirations and at the same time, he will also be balancing his carpentry work. Having made over 140 appearances for Cov across two spells, he has recently taken up the defence coach role at National One side, Cambridge.

“I loved playing and I don’t think that will ever change, but my body wasn’t allowing me to do things that I’d been good at. I was struggling with my knee and did have other aspirations.

“With the funding cuts in the game and with the issues we have had with Covid, it did seem like the right time to go and jump into another career, rather than prolonging a playing career. It also gave me the opportunity to go back into my carpentry so I have got a foot in both camps. Now I am happy balancing both. You have to enjoy the decisions you make.”

VERY minor in the grand scheme of things but if you’d like to have a read, I’d like to announce I am retiring from playing 🏉 Thank you, I hope you’re all safe and well! pic.twitter.com/BlitfFq8iv

His choice to retire clearly wasn’t down to any lack of enjoyment during his playing days. With Coventry, Stevens was integral in helping his side return to the second tier of English rugby in 2018 and he went on to captain the Midlands club in the Championship. In between his two stints at the Butts Park Arena, he also spent time with London Welsh and Worcester Warriors.

“I loved being at Coventry,” Stevens says. “I was obviously with London Welsh and I enjoyed it there. What Coventry gave was the enjoyment back for me because of what happened with London Welsh [going into liquidation], but also, I am based in Northampton so that was also another attractive prospect for me.

“I learnt an awful lot in terms of leadership. I loved that and that stands me in good stead, not just in rugby or work, but actual life so being able to read groups and develop conversational skills around how people work has been beneficial.”

Those attributes have also been enhanced due to Stevens’ experiences within coaching environments prior to his move to Cambridge. He has worked with Northampton Saints’ EPDG [Elite Player Development Group] as well as Coventry’s Development XV and local club Bugbrooke. “I think that is a great place to start by experiencing as many different environments as you can. I have still got a lot to learn now, but Cambridge will be a great place to learn in terms of working with Richie Williams and Dan Richmond.”

The move between Cambridge and Coventry has become a well-trodden path in recent years, ever since Director of Rugby Rowland Winter swapped Volac Park for the Midlands back in 2016. Since then, a handful of players have represented the two sides in some capacity and Stevens is the latest person to add both clubs to his CV.

In fact, the link between the two teams is why Stevens was able to step straight into a role with Cambridge after announcing his retirement. “Towards the back end of this season, we had a few guys from Cambridge at Coventry and I mentioned to them what they did defensively and who was kind of heading that up for them,” adds Stevens.

“They didn’t really have anyone to do it so I wondered whether there was a possibility of doing it. I got Richie’s number off a couple of the guys and shot him a message just saying whether there would be any potential to meet up. We had a good chat and things went from there. He’s got some great visions for the club. I’d heard some great things about Richie and I have played against Cambridge a number of times so it seemed like a great opportunity to get involved.”

Today we are pleased to announce the completion of our 1st XV coaching line up by welcoming @Heathstevens1
to the Blood and Sand.

Williams has already said the 28-year-old ‘will give balance’ to the Blood and Sand’s coaching set-up next season due to the fact the former centre has only recently hung up his boots. The success he was able to achieve in National One with Coventry also carries a lot of weight and Stevens hopes he can add value at Volac Park.

“The understanding of how the playing group are feeling and being able to translate that across in a manner that can connect with them will be key,” Stevens says. “Coaching is all about learning about the person and how the person learns. You can get the best from them by basing your coaching around that. A lot of my coaching will be based on how the person operates and how they are as people and only then can you get the best out of them.”

Stevens’ arrival at the National One club can only be seen as a positive. Despite a curtailed end to the 2019/20 campaign due to the coronavirus pandemic, Cambridge were able to take steps forward this year after narrowly avoiding relegation in the previous season.

Following the RFU’s calculations to determine the final league standings, Williams’ side finished 10th this time around and Stevens, who is still waiting to meet the whole squad, is keen for the club to continue their progress whenever the 2020/21 term begins.

“Stuff at the minute has all been over Zoom,” he adds. “It is good, but it is obviously not the same as meeting someone face to face. If I can add anything to the vision which Richie has got, that would be great. I think they have already got some really good foundations laid.

“I am hoping I can add what I know in terms of defence, work rate, having that mentality to get the ball back quicker to then launch Richie’s fantastic attack. I am looking forward to working on all of this and developing too and seeing where this squad can go.”