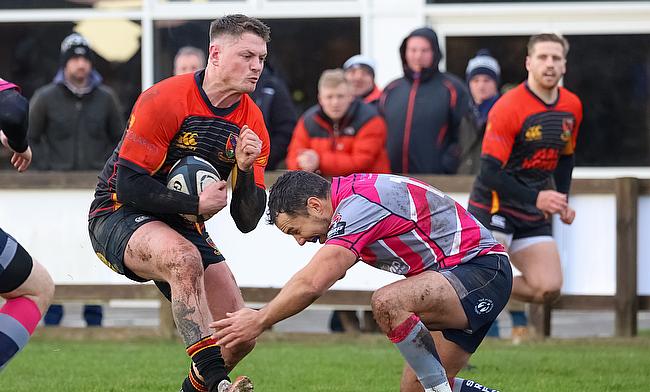 Rosslyn Park’s meeting with Blackheath in National One will have a bearing on both ends of the third tier but all eyes will be on the summit of National Two North as the title race reaches a pivotal moment. (Photo Credit: Gareth Lyons)

How many teams are in the National One title race remains up for debate, but what is nailed on is Rosslyn Park’s quest to finish on top of the pile when April concludes. Right now, Kieran Power’s side (2nd) have a game in hand and sit two points behind leaders Caldy – who host Taunton Titans this weekend – so in a way, the men from the Rock currently hold the cards in this thrilling battle for a place in the Championship.

Park looked back to their best two weeks ago when they dismantled Birmingham Moseley and on paper, they will be strong favourites when they take the trip across the capital to face Blackheath in Round 25. Whilst these two teams remain amongst the oldest clubs in the National Leagues, there is the possibility a full division may separate them next term if ‘Club’ can’t dig themselves out of trouble. Six straight defeats leaves them just four points above the drop zone, but James Shanahan’s side have been so close to being on the right side of the results during this difficult run. They now need their luck to change with just five games remaining in their campaign.

With third-placed Sale FC not in action this weekend, Cambridge (4th) have the chance to creep closer to the top three when they host Plymouth Albion (12th). Similarly to Rosslyn Park’s visit to Blackheath, the Blood and Sand are in a good moment having lost just one of their last 11 games whilst Albion sit four points clear of the relegation places following three successive losses.

We are at home to Rosslyn Park this Saturday and it's going to be a great match. Big thanks to Charlton Triangle Homes for sponsoring the match. Here's your squad list.
#blackheathruby #blackheathfc #club #kentrugby #nat1 #2022rugby #blackheath #eltham #royalboroughofgreenwich pic.twitter.com/Vfq7VUCfEn

Also in Round 25, we have fifth vs sixth when Rams RFC – fresh from last Friday night’s derby triumph over Chinnor – visit Cinderford whilst Birmingham Moseley entertain Bishop’s Stortford, who aren’t looking over their shoulders nervously just yet.

Below Stortford are the aforementioned Plymouth and Blackheath, but also Darlington Mowden Park and Leeds Tykes. Both clubs are in a scrap for survival and the North East side enter this Saturday seven points above the trapdoor after they crucially beat Leeds 23-22 last time out.

That win for Garry Law’s men has given them some breathing space and they face bottom of the table Tonbridge Juddians this weekend, whose time in this division is beginning to run out.

As for the Tykes, they still managed to secure two bonus points in defeat against DMP and they also have two games in hand on Blackheath who are directly above them in the standings. The Yorkshire outfit travel to Chinnor to conclude March knowing a positive outcome could edge them closer to safety.

This week, The National League Rugby Review Show’s Key Game comes from the Ferrens Ground as the top two in National Two North collide in Yorkshire. League leaders Hull will definitely not shout it from the rooftops but if they were to beat second-placed Sedgley Park on Saturday, a historic promotion to the third tier could be all but confirmed.

Gary Pearce’s side have had a special season and a special run of 14 straight wins leaves them six points clear at the summit. Hull have been pretty much faultless since the end of October but you have to credit Sedgley Park’s mindset to keep the table-toppers in their vision. Scott Barrow’s charges have put together eight consecutive victories, but maximum points from their last two games against Stourbridge and then Huddersfield has given them a shot of reigniting the promotion race. Without question, this is a game you cannot miss.

“If Hull were to win, you suspect they’re going to win the league. If Sedgley Park got something, it’s anybody’s game.”

?? Subscribe to The National League Rugby Review Show for a thrilling finale to the season: https://t.co/UnmXIYAX8m pic.twitter.com/3xbQltunCC

Rotherham Titans (3rd) may well be secretly wanting Sedge to get a result on Saturday because it could bring Adam Byron’s men right back into the title conversation. Despite losing to Hull in Round 23, a double over Chester leaves the Titans seven points off the top but to stay in the hunt, they must focus on their job away at Tynedale, who come into this weekend on a six-game winning run.

Also on Saturday, Chester take on Wharfedale, Sheffield Tigers face Huddersfield and Loughborough Students are up against a Harrogate side, who announced this week that Director of Rugby David Doherty will resign from his position at the end of the season.

In the space of exactly a month, Esher have gone from picking up the pieces after successive defeats to top of the tree in National Two South. Victories over all three of their title rivals – Redruth, Clifton and most recently Worthing Raiders – leaves Peter Winterbottom’s charges three points clear with six games to go in the season.

Dan Rowland’s dramatic winner at Worthing last week has handed the Eees control in this fascinating promotion race, but they will be keen to ensure their recent hard work doesn’t go to waste. The leaders end March with a trip to Old Albanian, who have performed a lot better on their travels than they have at home this term. Dan George and James Osborn’s side have only tasted victory on three occasions on their own patch so the odds are seemingly in Esher’s favour.

🏉 Subscribe now! It’s just £6 for the rest of the season!

Hoping the form guide flies out of the window in St Albans will be Redruth (2nd), Worthing (3rd) and Clifton (4th). Just three points separates the title-chasing trio with the Reds hosting Canterbury this weekend whilst Worthing visit Hinckley and Clifton entertain Bury St Edmunds at Station Road.

Elsewhere, Henley Hawks take on Rochford Hundred at Dry Leas – which will also be the venue for England’s U20s Women’s international against France next weekend – whilst Leicester Lions face Barnstaple, Dings Crusaders travel to Barnes and Guernsey Raiders are at Westcliff.