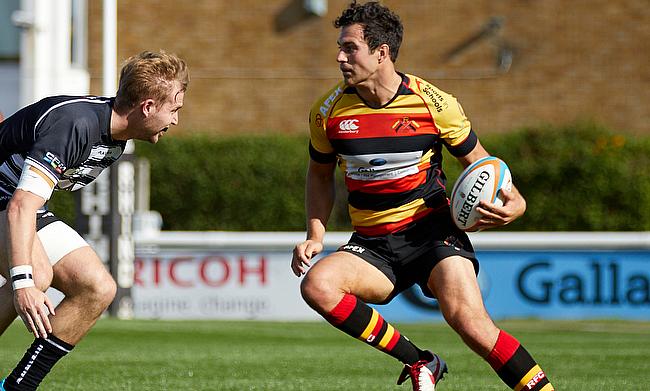 Cam Mitchell insists there is still room for improvement for National One league leaders Richmond and admitted victory over Rosslyn Park this Saturday would represent “another step” forward for the club. (Photo Credit: Roger Wooldridge)

Last weekend, Steve Hill’s side were able to open up a seven-point gap at the summit of the division thanks to their 50-0 win at Canterbury, coupled together with Park’s 27-27 draw with Chinnor.

Second-placed Park have been Richmond’s closest challengers for top spot during the opening 10 games of the season and this weekend, the local rivals meet at the Athletic Ground for an eagerly anticipated clash.

Richmond could tighten their grip on pole position if they were able to secure their 10th victory of the campaign against their near neighbours, but Mitchell says aiming for promotion has not been the club’s primary focus so far this term.

“In this league anyone can beat anyone,” he said. “It is probably one of the toughest leagues there is in the country. I think everyone is very evenly matched. There are some fantastic teams and we know it is a long season so every game counts.

“It has been a good start to the season for us. We have had a few new players this year so it has been a case of starting fresh and building again. I think we have still got a long way to go to get better, but I think we are moving in the right direction.

“I think it [victory against Rosslyn Park] would just be another step closer to achieving our goal and that is to have the best season we can. We don’t have any set goals.

“We have said we want to finish the season in the highest position possible having played well and having built a squad which is a sturdy squad.

“It could have been quite easy for us to come down and say ‘we want to get promoted and go back up’, but that hasn’t been the focus.”

As Mitchell alludes to, Richmond were relegated from the Championship last season but it was not as simple as just turning their attention to National One rugby.

Yorkshire Carnegie’s financial problems were well documented over the summer as the club reportedly still owed players some of last season’s wages as well as other costs.

Richmond were keen for the RFU to enforce a punishment on the Leeds-based outfit due to their money issues (which may have seen Richmond return to the Championship in place of Yorkshire) but their hopes were quashed meaning their three-year stint in the third tier came to an end.

In an interview with ncarugby.com back in August, Richmond Director of Rugby Steve Hill urged the club to focus on National One and Mitchell revealed the frustration of the summer was forgotten about before this campaign had even begun.

“That is all irrelevant right now,” said the Richmond captain. “It is not even in our minds and hasn’t been since pre-season. That was done at the end of last season.

“There was of course stuff and conversations happening in the background, but they were irrelevant to our preparations and we were focusing on this season. We are just trying to deliver the best performances we can and I think we are doing that at the moment.”

The London derby is calling…

Mitchell recently made his 100th appearance for Richmond in their victory against Old Elthamains at the start of the month and the centre also represented the club when they won promotion to the Championship back in 2015/16.

Richmond had already secured a place in the second-tier by the time they met neighbours Rosslyn Park in that season, but the latter prevailed as they secured a 25-22 win at the Athletic Ground.

Now the two clubs, who are separated by just 2.5 miles, are ready to renew their rivalry and having experienced this division and this fixture before, Mitchell is relishing the occasion once again.

He added: “I did play against them in 2016. It was our penultimate game but despite the fact we were already promoted, it is always bitter losing to your local rivals. I was part of the team that beat them at their place just before Christmas, though!

“It is a derby game and it is going to be very emotive for probably everyone involved, but hopefully our focus will be just on trying to put in a good performance to deliver what is necessary on the pitch.

“I just think they are a good outfit. They seem to be strong in a number of different positions and they have a well-rounded game so when they come here, we know it won’t be easy but I am sure it will be a fierce battle.”