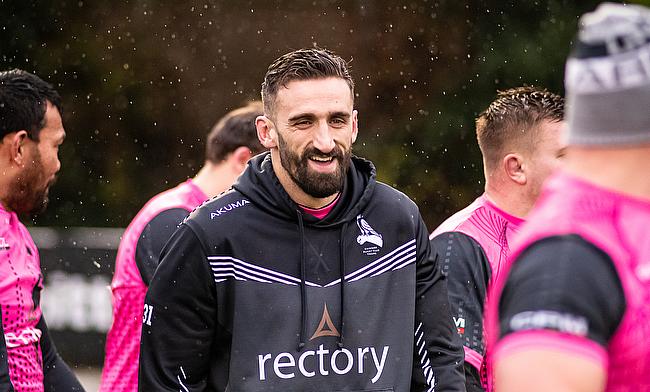 Carl Kirwan has not shied away from Chinnor’s ambitions in National One this season as Matt Williams’ side aim to continue their excellent recent form this weekend. (Photo: David Howlett)

The Black and Whites are currently on a six-match unbeaten run and last weekend’s 22-17 win over Birmingham Moseley has left Chinnor just five points behind league leaders Rosslyn Park as we arrive at the halfway point of the campaign.

Following a mixed start to the term, the men from Kingsey Road are now experiencing a purple patch of form and with potentially key fixtures to come against Darlington Mowden Park this weekend and title-chasing Richmond before the Christmas break, Kirwan was not afraid to reiterate Chinnor’s aspirations.

“I think we are pleased with the position we find ourselves in,” he said. “We took a bit of time to find our stride, but we seem to be hitting a bit of form now.

“From a coaching side, we can still improve and there are still certain aspects of the game we are not happy with which we believe, as a team, we can be better at.

“We don’t take any game for granted. We target every game we play in. That’s our goal. When we get out on to that pitch whether it is home or away, we are going out there to win.

“At the start of the season, we sat as a group and said we want to be a team that wins the league. People will look at that and call it arrogance. For me that is not being arrogant, that is just being honest with ourselves.

“Matt went out there and signed a number of quality players so it doesn’t take a genius to work out what we are aiming for and I am not going to hide behind that now and say that is not our goal. It is still well within reach.”

Kirwan was one of several players recruited by Williams over the summer as Chinnor looked to build on the 10th placed finish they achieved last year in their maiden season at this level.

Here's your @ChinnorRugby side to face @MowdenPark in Thame tomorrow.

Experienced names such as Chris Elder (Yorkshire Carneige), Ofisa Treviranus (London Irish and Samoa), Laurence May (Ealing Trialfinders) and Nick Selway (Jersey) moved to Kingsey Road and the desire which Chinnor showed in the off-season was certainly a factor in Kirwan moving to Oxfordshire.

“There were a few reasons involved for me,” said the Chinnor captain. “Matt showed great ambition with his signings for the club as did chairman Simon Vickers. They have great aspirations for the club and there is potential around the club. There was also a job in construction on the side and also the chance to start coaching which is something I am really enjoying.

“The role I have took over at Chinnor is defence coach. Anyone that knew me as a player would say that is the one thing I pride myself on. I may have not been the most flamboyant player and making line-breaks everywhere, but in defence, that’s what I like to think my ‘X-Factor’ was! Coaching is something I would love to move forward with.”

Kirwan admitted he was ‘surprised’ to be also named as club skipper in the summer, but the 28-year-old has plenty of experience under his belt to lead this Chinnor outfit.

Having played for five years in the Premiership (one with London Welsh and four with Worcester Warriors), Kirwan is keen to use his time at the top level to help Chinnor in any way he can.

He added: “There is talent and experience throughout the side so to be able to lead those boys out week in, week out and hopefully lead the way in the aspirations the club have, it is a massive honour.

“It [playing in the Premiership] was absolutely fantastic. I am still in a bit of a ‘down stage’ from it and you have to accept that comes at some point, but it was great. You are running around a field on a Sunday when your Mum and Dad drive you to games and at that point, it is something that you dream of. You watch these players playing at the highest level on TV so it was an absolutely fantastic thing and something I am really proud of.”

Well it’s been emotional, ups and downs at a club with every potential. Been frustrating through injury but that’s the sport we love. Onto the next chapter @WorcsWarriors

Kirwan has certainly adapted to the third tier of English rugby and as the first half of the campaign draws to a close, the National One title race is intensifying with every passing week.

In the middle of November, Richmond held a seven-point lead at the summit but now just five points separate the top five in the division and both Chinnor and Darlington Mowden Park find themselves in the mix.

Victory for Williams’ charges on Saturday against a Darlington side, who have not lost for over a month, would be a significant result in the fight for top spot and Kirwan is under no illusions of how crucial the final two games of 2019 might be for Chinnor.

“This game [v DMP] is massive, as is every game,” Kirwan added.  We have hit a little bit of form and so have Darlington. As we say, this league is so attritional so things can change overnight.

“It looked like at one point Richmond were going to run away with it, but now it is all back open. Everyone is so tight and I think it just shows the strength of this league.

“In regards to the weekend, we don’t take anything for granted as a side. We are a very hard-working side, but I think going into this game, we realise it is huge.

“If we win this game, we can take some great form going into Richmond away the weekend after and if we can get some good points and two wins, we would head into the New Year looking like a really strong unit.”