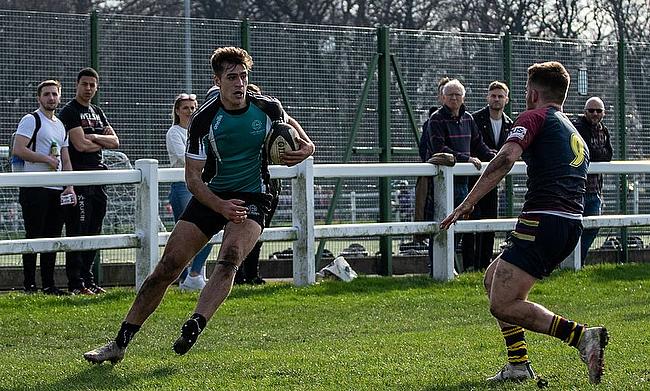 With the season entering a crucial period – before the widescale impact of the coronavirus pandemic – Birmingham Moseley bolstered their squad, which included the loan additions of Chester Duff and James Forrester.

The two exciting backs are on a similar journey in the game, but whilst Moseley has been their home since February, the duo had crossed paths before arriving at Billesley Common.

Since the introduction of the competition at the beginning of the 2016/17 season, Forrester’s Hartpury have been the dominant force during the Championship stage and the Gloucestershire outfit were able to make it a hat-trick of titles following a 45-27 victory.

"We are setting our sights on climbing the table and having a crack at making it to Twickenham in April.”

A try-scorer today for @LeedsBeckettRFC and Chester Duff wasn't wrong when we chatted to him at the start of the year! 👀🔮 #BUCSSuperRugby https://t.co/cMSBp1rkMU

“James is obviously here and we met Hartpury in the final last year,” says Duff. “We definitely mentioned it at one point in one of our first training sessions together at Moseley!”

“Of course, it had to be mentioned!” adds Forrester. “I think it is a little Hartpury thing that we try and remind some of our old opposition about some of our past university games! It is all fun!”

Unfortunately, both Duff and Forrester did miss the final last year due to injury. The Beckett winger suffered a cruel setback as he limped off during the warm-up whilst Forrester was unable to return to full fitness following an injury he sustained before the knockout stages.

Since Twickenham, the duo have been connected with Championship clubs. For Duff, having briefly experienced the Super6 Series in Scotland with Ayr, he was able to join Ealing Trailfinders (a team brimming with BUCS Super Rugby talent) before this season began, with Forrester moving into Hartpury RFC’s set-up following the conclusion of his university course.

“I joined Ealing the week of their first game and you then realise how big that step is from university rugby to the higher end of the Championship,” Duff, who has also represented Saracens in the Premiership Shield this term, says. “The standard of wingers speaks for itself! The likes of Seb Stegmann, James Cordy-Redden, Reon Joseph and Elijah Niko are brilliant players but a couple of them picked up knocks and it gave the chance for me to step in. It has been a step up in quality which has been difficult, but I have definitely developed as a player.”

Duff actually started his university rugby in the 4th XV at Beckett, but under the excellent guidance of Kerry Wood and Colin Stephens, the flying winger ended his time in Yorkshire as a key 1st team player. “I wouldn’t be where I am without what happened at Beckett,” Duff continues. “I didn’t go to university for rugby. I started in the 4th XV at Beckett and ended up in the first team and having a good season in my last year so it gave me a chance to press on with a career in rugby.”

For Forrester, his university experience couldn’t have gone much better. The Zimbabwe 7s international won three Championships with Hartpury and played in two finals against Exeter and Cardiff Met.

“It was awesome,” Forrester says. “The Hartpury programme is a very unique one. It has managed to develop some really, really world class players and every year, they are looking for that next one. They just want to develop people as much as they can and give them the opportunities to really show themselves. It has definitely been working for the last few years.”

The likes of Seb Negri (Italy), Jonny May and Ellis Genge (England) and Ross Moriarty (Wales) are all examples of players who have plied their trade at the Gillman’s Ground before reaching the international stage. It is clear there is no shortage of Hartpury representatives across all levels of the game and Birmingham Moseley is a club which is home to a handful of players who have previously donned the red jersey. Alongside Forrester, Will Biggs (last year’s captain) and winger Aquile Smith also joined the National One outfit this season.

https://t.co/VyDBCWKyLK #EmergingTalent Seb Negri on life with Hartpury, his supportive family, Italy and his move to Treviso pic.twitter.com/O22C3lzRVN

“I think there are Hartpury players all over the place!” Forrester says. “I played with Will and Aquile when they were at Hartpury so they have been a massive help to me in terms of settling me in at Moseley and showing me the ropes.”

Both Duff and Forrester will now be hoping this current season does resume at some point following the suspension of all rugby due to the coronavirus outbreak.

The duo are keen to gain some valuable gain time for Moseley before continuing their rugby journeys and they could play a crucial role in helping the Midlands outfit avoid relegation as the club currently sit four points clear of the drop zone with five games remaining.

“It has been enjoyable,” adds Duff. “They are a really good club, but obviously they are in a bit of a relegation scrap at the moment. They have got some unreal players, especially in the backs which is why I have struggled to get a lot of game time at the moment. I have moved from the university game and into the professional background both at Ealing and Moseley just to see what it is like and I am learning a lot so we will just have to see what happens.”

“I am not sure if we will play rugby for the rest of the season, but it is now about also building towards all the opportunities that may come our way next season,” says Forrester. “I work at Hartpury as well so here is a brilliant environment for me to continue trying to get better and keep pushing myself with some of the best players around.”