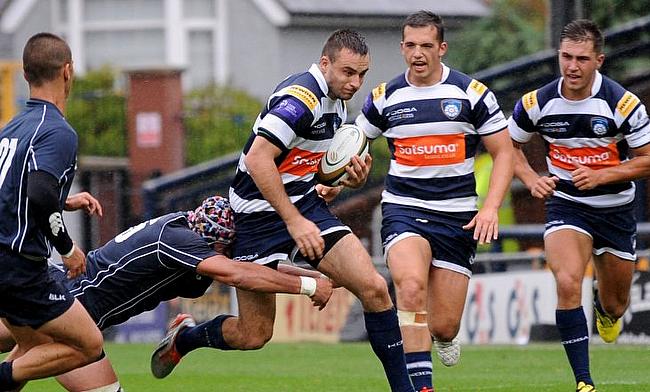 Chris Georgiou has declared Darlington Mowden Park can improve on their second-place finish of last season.

Georgiou had recently arrived at the Northern Echo Arena after stints in France and Australia with Rennes Rugby and Manly Marlins, respectively.

The 26-year-old began his career with Yorkshire Carnegie before venturing aboard and he also represents Cyprus on the international stage.

However, the full-back is now concentrating on life in the National Leagues and he insists Darlington have the ability to go one step further in the 2018/19 campaign after finishing as runners-up to Coventry last term.

Welcome to the Mowden Family, Chris!

And Georgiou said: “I am excited to be back playing rugby in England.

“Mark Luffman, who is one of the coaches up at Darlington, got in touch with me and I know him from when I was at Yorkshire Carnegie a few years ago.

“He knew I was back in England and it was a good opportunity to play in National One and take the next step with Darlington.

“The club is very well run and very well organised. I don’t see why we can’t improve on what the club achieved last year.”

Georgiou is now back on home soil and his first steps in the game came with Yorkshire Carnegie.

However, after growing up with the club, the Halifax-born player decided he wanted to try something new.

He added: “It was actually my choice to leave Yorkshire Carnegie. I was at the club from when I was about 12 or 13 and probably played about four or five seasons.

“I picked up a shoulder injury at the start of 2015/16 which was the season after I had won the Player of the Year award. It came at such a bad time because I wanted to carry on my good form, but in the end, it held me back.

“It took a while to get back to feeling right and in the end, I wanted a change.”

A move to Australia followed before heading back to Europe to join up with Rennes last season.

In that time, Georgiou helped the French club to promotion from Fédérale 1 and also won Conference South 2 with Cyprus.

“I had been living in Yorkshire my entire life and wanted to travel around,” Georgiou said. “To see Australia and play a bit of rugby out there was great. It was a great experience for me and I learnt a lot.

“I was in France with Rennes where we won promotion last season. I enjoyed by time over there. I received a message from a mate that they needed a full-back so I joined, but I just fancied coming back to England to play again.

“It feels like the right time to come home because I have experienced the French culture and the language barrier was tough so I am keen to push on with Darlington as well a playing for Cyprus too.”

When Darlington begin their campaign against Bishop’s Stortford on September 1st, it won’t be Georgiou’s first taste of the National Leagues.

During his early days with Yorkshire Carnegie, he was sent out on loan to Otley and Wharfedale so Georgiou knows what to expect as he aims to return to the Championship with Darlington.

He said: “When I was 17/18 years-old, I was out on loan in the National Leagues so obviously I have experience in these divisions.

“Obviously, you want to play at the highest level you can. I am 26 now and turning 27 in January so I am getting on a bit and I know how tough this season will be!

Huge thank you to all the players, supporters and @MowdenPark & @DMP_Sharks as a club for an awesome season. Watching all the minis, juniors, girls, ladies & seniors the club has so much to be proud of and to look forward to. #mowdenfamily

“A return to the Championship would be great. I have numerous playing experiences there and to go back again next season would be brilliant.

“Darlington are such a good club. The facilities are great and even though they are semi-professional, it is a very professional environment so they are in great place to give it a real good shot.”

Georgiou may well feature for DMP against his former club Yorkshire Carnegie next month as both sides meet in a pre-season game at the Northern Echo Arena.