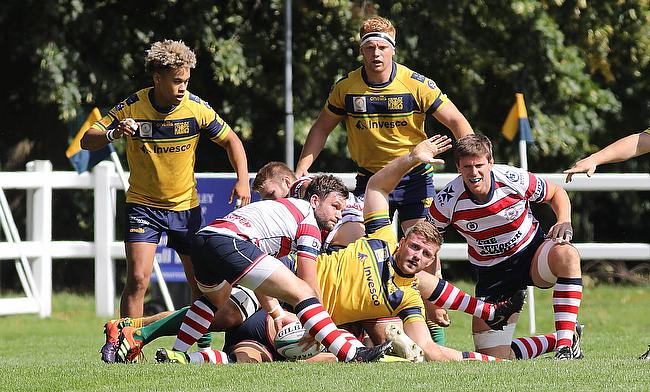 Dave Lewis believes Rosslyn Park need to “hit their straps” for longer periods in matches if they are to continue competing towards the top of National One. Photo Credit: (Steve Karpa)

Last time out, Kieran Power’s side were second best as they slipped to a surprise loss against Cambridge as Park missed the chance to go top.

The men from the Rock currently occupy second spot in the table, but they are only three points behind league leaders Richmond who suffered a defeat in Round Seven whilst the teams around them also failed to win.

After trailing 24-6 at half-time against Cambridge, Park left themselves with too much to do in the second 40 and Lewis thinks his side need to sustain a high level of performance on a more consistent basis.

Lewis told ncarugby.com: “We are in a good position. We are playing to win the league so we’d always like to be top dogs, but it is all quite congested at the top so it is better than being down at the bottom!

“I think the main thing is that we have done quite well, but there are a lot of areas in which we can improve on. We don’t think we have hit our straps for long enough in games so I think if we do that, we will get better results.

“All credit to Cambridge. They came out and played well. They were very up for it and spoke about it in the press beforehand and unfortunately for us, we didn’t really turn up – myself included.

“After the game, we were gutted anyway and it was even more annoying because we knew a win would have put us top because of the teams around us also losing. At the same time, we have kind of dodged a bullet almost because no-one has gone ahead of us.

“What I am discovering in this league is that the league positions don’t really matter before the games. Everyone can beat everyone and we need to be a bit more consistent in our performances week in, week out.”

Lewis moved into National One after retiring from the professional game in the summer. The scrum-half made 28 appearances for Harlequins after joining from Exeter Chiefs and the former England Saxon felt Park was the perfect fit to allow him to balance his rugby and his work as a financial advisor.

He added: “It is obviously great to play at a competitive level and do something I enjoy, whilst also transitioning and developing a career outside of rugby. It is very well publicised that it is not the easiest thing to do so if I can make it slightly easier, that would be great.

“Initially, I actually approached the club. One of my mates, Jordan Turner-Hall, is a coach there and I was chatting to him about what I was doing this year and he said would you consider playing for us?

Apply a disciplined, consistent ‘game plan’ to your 💰, grow confidence and live the life you want.

Get in touch if you want to find out more 👍🏼 pic.twitter.com/zHvWUMPteH

“I already thought it would be a great opportunity and it is good club which are continuing to do really well so it has worked out really well. I have also got a few mates down here so that always helps!”

Lewis will now be hoping his new side can hit back this weekend as they head into an intriguing fixture with Birmingham Moseley at the Rock.

Moseley were one of the clubs to profit from the misfortune of Park and co last weekend as a 25-19 win over Canterbury moved Adam Balding’s side to within just two points of their hosts.

The Midlands club have impressed in the opening two months of the season, especially after fending off relegation last term, but Lewis hasn’t been shocked by the start Moseley have made.

“I am not overly surprised by their form,” Lewis said. “I think they have got good players there. I think their nine, 10 and wingers and 15 are all threatening and they have got some really good ball carriers as well. Jonny [Arr] at nine is a great organiser and I am sure he has got them running in a way which is going to make them successful.

“But, we are confident in ourselves and if we think we can get our performance right and we are firing on all cylinders, we will be hard to live with.

“Everyone plays the game to be at the top and we have got a very competitive group. When you look around at the boys playing, they all kind of have an expectation on themselves to win and think we should be right at the top. We want to make sure we can challenge as much as we can.”