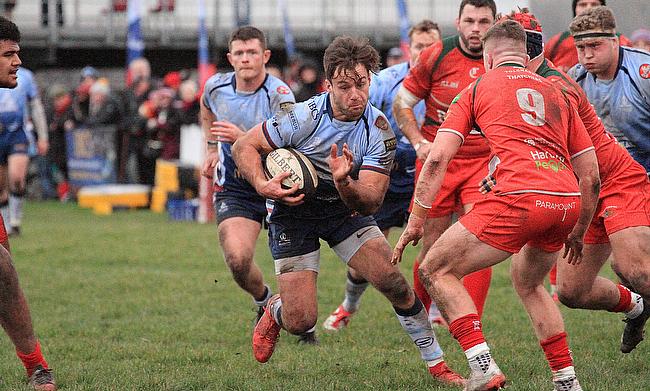 Rotherham Titans’ Jamie Cooke admits the club’s major problem this term has been producing an 80-minute performance, but he believes they can still turn their campaign around. Photo Credit: (Gareth Siddons)

Last Saturday, the Yorkshire club lost 38-32 against Plymouth Albion after the Titans had led by 10 points at half-time, but once again, Martin Jenkinson’s side couldn’t hold on to their advantage.

It was not the first time this season Rotherham have let a lead slip at the break and their frustrating losses have been a factor in their tough season to date. As things stand, the men from Clifton Lane currently sit in the bottom three and they are eight points from safety.

Just before Christmas, Rotherham were yet again kicking themselves after they allowed Old Elthamians to come from behind to snatch a victory but since the recent arrival of new coach Steve Salvin, who has replaced Anthony Posa, Cooke says the team are working hard to solve their issues.

“The big problem is playing for 80 minutes,” said the versatile back. “We could be well in games at half-time and winning at half-time comfortably by a score or two, but we then concede in the second half and you see a drop in body language and energy.

“Unfortunately, we have been on the wrong side of some heavy defeats just from a lack of energy and belief. We need to go out there and go up another gear and really just put games to bed.

“Steve has now come into the club and rejigged a couple of things in attack and defence. We are now working really hard in training and he is saying to just give it our all when things aren’t going well. When there are massive negatives in games, we need to front up and just go again.

“That is exactly what we did the other day against Plymouth and we scored four tries for only the second time this season. We managed to come back which actually gave us two losing bonus-points so it is about turning negatives into positives.”

Cooke has been with the club since 2017 so he has experienced the Championship with Rotherham as well as relegation to National One.

Since their 14-year spell in the second tier came to an end, the Titans have undergone changes in coaching staff and player personnel, but as they now fight for survival once again, Cooke insists the side are doing all they can to change their fortunes.

He added: “Rotherham are a very proud club so it’s quite sad to see the club where we are now. Going through another relegation is something I don’t want to be involved with again because I have been in some pretty dark days at the club.

“The fans are very loyal and this is a family club. This place is their pride and joy. We just want to give back to them because it is sad to see a club that was once a Premiership side now in a relegation battle. We’re doing all we can and hopefully we can stay up this year.”

Are you looking for a way to keep fit an healthy whilst engaging with other members of the community? Join The Titans Community Foundation players For Our New Free Walking Rugby Session At Rotherham Leisure Complex. The Session Is Held On Fridays From 1pm To 2pm And is Open To Men & Women. No Previous Experience Required & An Excellent Los Impact Way To Keep Fit & Have Fun. #rugby #community #titans #fun #skills #stayfit #rotherhamrugby #ncarugby #Nat1 #walkingrugby #bettertogether

The ‘family feel’ of the club is something Cooke is heavily involved with as he is part of a group of players who help out with the Titans Community Foundation.

As part of the organisation, the players deliver activities in Rotherham which include going into schools to introduce rugby to children of all abilities from age 12 and below as well as being ‘reading buddies’ for pupils.

Added to this, the foundation also runs a healthy heart and healthy lifestyle programme following their excellent work with the British Heart Foundation and Cooke has also been involved with walking rugby sessions.

“The Titans Community Foundation is a really good organisation,” Cooke said. “One of the things we do which links into the supporters of the club are walking rugby sessions once a week.

“It is a really good social and you get a lot of the older supporters at the club who may be coming back from cardiac issues so they can kind of use that as their cardiac rehabilitation. These guys have been at the club for years and years supporting Rotherham so it is nice to give something back.”

Those loyal fans may now be preparing to make the trip down the A1 to Cambridge this weekend as Rotherham enter a crucial period in their season.

Following their visit to 12th placed Cambridge, the Titans take on Birmingham Moseley and both clubs are directly above Rotherham as things stand.

Cooke knows his side are more than capable of putting in an excellent display, as highlighted by their superb 26-24 victory over Chinnor back in October , but he is also aware that the team must rally around each other if they are to dig themselves out of trouble.

“Cambridge and Moseley are in and around us at the moment so they are the teams we are trying to catch,” added Cooke.

“Cambridge are quite a dangerous team out wide and are pretty big up front. If we can kill their momentum in attack and slow their ball up, they are not going to get those opportunities out wide. Just for us, it is going to be concentrating on ourselves and bringing the energy if things aren’t going our way.

“We know when we are getting our game plans right, we can really rip teams so once we have got that energy and belief that we can do it for 80 minutes, we will be finding we can beat the sides above us. We have now got 13 games left to see where we can get to as a team.

“Steve compared our situation to a war zone. When things go against us, you have got two options; You can either stand there and take it or front up and fightback. We are quite low on confidence so we just really want to get around each other and boost confidence. We want to back our systems and hopefully the result will take care of itself.”