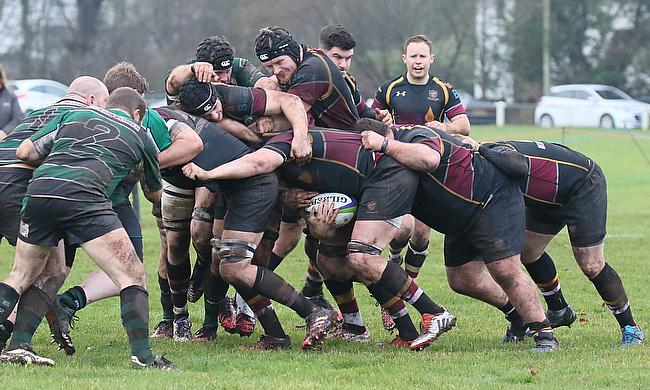 Louis McGowan on being back in National One, his journey with Caldy and why he still loves playing the game

Throughout Louis McGowan’s rugby career, he has always played at a high level in the English system. The forward has competed for Coventry, Rotherham, Sedgley Park and now Caldy as well as representing England Counties so it is fair to say the 40 year-old has certainly covered some mileage.

“I have enjoyed playing rugby across all levels, but it has been a real bonus to be part of a side that were in National Two North,” said McGowan. “That step to National One with Caldy has been tough so far for me. There are some big boys in this league, but it is a great experience to be playing at this level again.”

As we approach the halfway point of the season this weekend, McGowan is still loving every minute of playing the game. This is his fourth term with Caldy and he has been part of their journey from establishing themselves in National Two North, to stamping their mark on the third tier of English rugby. Physically, he says injuries are starting take their toll, but his energy to play the sport still burns bright.

“I would love to be involved more, but my injuries so far this season have played a part,” McGowan told the NCA. “Everyone keeps saying to me become a coach, but I just love playing still! We have a great squad here and it is good to be part of. Also, we have some talented young players in the side and I’m a bit older now!”

“Tom Sanders is our captain and he is under 25 years old and the quality we have up front is great for the club because we are all fighting for places. They have stepped up to the mark when I have been injured so it is always tough to get back in the side.”

McGowan’s assessment of his fellow peers comes as no surprise especially after the season the club had last year. The team spirit and togetherness combined with quality and hard work saw Caldy lose just twice on their way to creating club history. “For Caldy, National One is the highest they have ever been in this division,” McGowan says.  “As a club, it has taken a lot of hard work on and off the pitch to make us a National One side and we really want to compete at this level in order to be sustainable.

“The vision of the club has been superb. Simon Verbickas has to take credit for a large part of that because he came in and made some great signings and installed belief into the club. He didn’t come in all guns blazing, but he has guided the club to where we are now.”

And where Caldy are now is 11th in the National One table as we approach the Christmas break. The Wirral outfit have experienced both the highs and lows so far in the third tier, but they enter this weekend four points clear of the bottom three and in decent form at Paton Fields.

Caldy have won on four occasions so far this term, three of which have come at home and they will be hoping to add to that tally when they host Esher this Saturday.”

“We never got ahead of ourselves after promotion, McGowan adds. “We want to be in mid-table and make sure we are safe because it is tough to stay in this league. Look at Macclesfield over the last couple of years. They are a strong team, but just couldn’t stay in the league so we want to try and do that.

“We are looking at each game as it comes, but overall, I reckon there are two or three more games which we should have won this season. We had good start, but we have let games slip. We also gave Coventry a fright earlier in the year and we have to step up our game like that more regularly. Mistakes cost us that day and at this level, you will be punished but it is all a learning curve for the squad.

“We are much more comfortable at home. Our back line like playing at home, but we just seem to enjoy playing at our place. We would love to take a scalp this weekend against Esher and get a win before the Christmas break.”