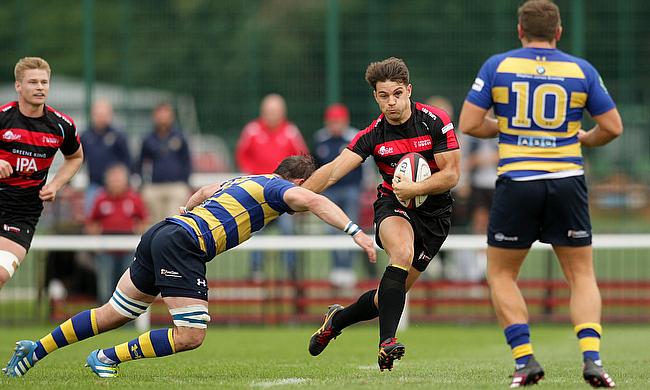 Blackheath’s Markus Burcham believes this Saturday’s titanic clash against Old Elthamians is the biggest game of the season so far.

The ‘Club’ centre admits it would be a significant result if Blackheath were to defeat the league leaders and move to the top of National One before the Christmas break.

Last week, James Shanahan’s men narrowly lost to Rotherham Titans meaning the second-placed side are now four points behind OEs as they prepare to meet at College Meadow.

Club were defeated 21-10 by their local rivals back in September and after three encounters with OEs at this level, Burcham revealed Blackheath’s attitude must be correct if they are to regain the bragging rights this weekend.

MATCH PREVIEW ?|
"We won't place too much pressure on ourselves," insists OEs boss as @ElthamiansRFC and @Blackheath_1858 go head to head at College Meadow tomorrow in the race to be Xmas?number 1️⃣!
➡️ https://t.co/WD4jv8d2gm #Nat1 @nca_rugby @national1_rugby @TalkRugbyUnion pic.twitter.com/IyVTFYXqdj

“They are obviously the best team in the league by form so going over there is going to be a huge challenge,” Burcham said.

“What they have been very good at is really hyping up the game and making it quite a big deal for everyone involved with the club.

“From the very first game last year, we tried to play it down and not get involved with the whole ‘local derby’ aspect and we came unstuck whereas to them, it was clear it was like their World Cup Final.

“Conversely, we came out with a far improved attitude in the second game and it helped us beat them. They did beat us earlier in the season at our place so it is very significant to us if we get a result, especially against them. We don’t want to hide from the fact it is a derby game.

“What we can’t afford to do is let them get a result. We are aware it is within our control to manage the gap between us and them at this stage and that could be quite pivotal come the end of the season.”

Blackheath’s loss to Rotherham last week was their first defeat since the end of September, but they were still able to stay in touch with OEs which pleased Burcham.

“It was disappointing at the weekend to lose, but it is quite exciting because even though we lost, we managed to pick-up a bonus-point,” Burcham said.

“We are only four points behind Old Elthamians and if we had won, we would have been one point behind them so nothing has really changed in terms of our mentality going into Saturday.

“We know how potentially important it is for the remainder of the season. There are no easy games in this league so there is just as much pressure on the teams around us as there is on us.”

Blackheath’s outstanding form so far this season has kept them firmly in the promotion hunt, but this has been the most competitive National One campaign in recent times.

Over the last two years, Hartpury and Coventry have romped to the title, but this year, it has certainly not been a procession.

“We are pretty happy with the results and obviously, our form has reflected our league position,”Burcham added.

“I think halfway through the season and to be second is probably the highest a Blackheath team has ever been at this stage so that is something we are quite pleased with.

“In particular, this season is shaping up to be probably the most competitive it has been since I have been involved in the league which is around six or seven years.

“The fact that it is so competitive, we are still up there in second and within one result of the league leaders is a very good place to be.”

According to Burcham, the depth of Blackheath’s squad is another reason why they are currently having such a successful season.

The ‘Club’ skipper admitted the squad size isn’t off the scale, but insisted the contribution of everyone involved within the 1st XV has been key.

“We have got quite a small playing squad and we do have quite a serious injury list, but we’ve had lads that used to be fringe first-team players come in and do a sterling job,” Burcham said.

“It is good for the club that we have that squad depth rather than just saying we’re slipping off results because we don’t have some of our players fit. We’re still managing to win games so it has been very pleasing. When it is such a competitive season, you need to have a squad which you can call on because it’s very brutal every week.

“I also think the fact that we haven’t had a huge turnover of core players is perhaps one of the reasons why we are now pushing up the league.

“Last year, we had a handful of people leave so we had to improve and strengthen. I think we have done that so I would like to say our best starting XV or matchday 20 is one of the most competitive in the league at the moment so it is a good place to be.”

Throughout the course of the season, the battle for top spot has been tight and as we begin the second half of the campaign, Burcham is keen for his side to remain in the conversation.

He added: “It is still that one game at a time mentality. Our motivation is all about staying in the fight. If we can stay within touching distance, being in second place and chasing first down is not the worst place to be.

“We are certainly not hiding from the fact that we would like to try and win the league this year, but as we say, we can’t overlook any team in the league because it is so competitive this year.”