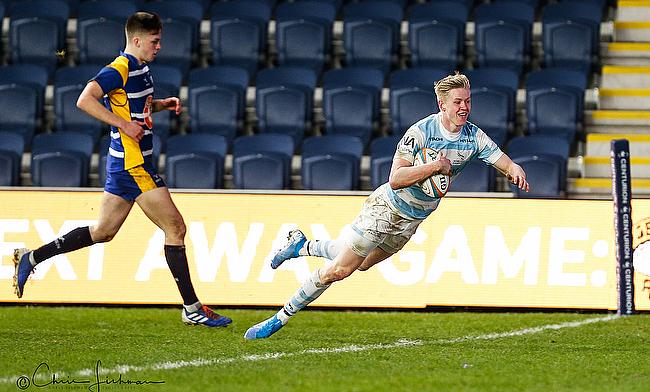 The rise of Josh Hodge has been nothing short of astonishing.

It was around this time last year that the full-back learnt about his call up to Steve Bates’ England U20’s squad for the Six Nations, but 2020 has brought about a much grander call to international duty.

At midday on Monday, it was announced that Hodge had been selected by Eddie Jones to take up an apprentice role as the senior England squad prepare for their Six Nations campaign, which begins in Paris on February 2nd.

More astonishing still was the fact that Hodge had only made his senior debut the day before, scoring a try as Championship side Newcastle beat Yorkshire Carnegie at Headingly. Clearly impressed by what he had seen, Jones believes that Hodge is an exciting prospect.

“Did you see the try he scored yesterday?” Jones said on Monday. “It was like out of one of those e-games. He beat 15 defenders, then he ran around the touch judge, still scored. I saw him last year at the 20s (U20s World Championships), I was really impressed by him. Tall, fast, kicks goal from 60 meters. An interesting prospect, so we want to have a look at him a bit closer.”

Excited to see some of the @BUCSSuperRugby lads in action for England U20s tonight. #ENGvITA@NorthUniSport and @FalconsRugby’s Josh Hodge going well in the warm-up 👀✅ pic.twitter.com/99a3LjRKnV

Still only 19, Hodge was a stand-out player for Northumbria University last season in BUCS Super Rugby, whilst also representing Newcastle in the Premiership Shield competition. As a result, the former Sedbergh student earned much deserved recognition to play representative rugby for the U20s and was one of England’s most consistent performers in the Six Nations and at the U20s World championships in Argentina.

“It was inevitable,” Hodge’s former Northumbria coach Darren Fearn said. “I’ve had a lot of conversations with people who have said; he’s definitely got the talent to play for England. Did I expect him to be part of the squad after a year? Probably not.

“He is an obvious talent and he proved that at the Junior World Cup with his goal kicking and the tries he has scored. He’s an athlete. He’s come out of Sedbergh as well, you just need to look at the talent that has come out of there.”

Whilst with Northumbria, Fearn established a reputation for developing elite talent. Perhaps the most recognisable name would be England 7s flyer Will Muir who studied Mechanical Engineering in Newcastle before taking up a full-time contract with England Rugby.

What is interesting about Hodge’s inclusion in the England training camp is that out of all the players he has been selected alongside, the Newcastle youngster is the only recognisable full-back. Whilst the likes of Elliot Daly have filled the 15 shirt admirably, many are still to be convinced of a long-term option since Mike Brown fell out of favour.

Apprentice players have been a feature of Jones’ squads since he took over in 2016. The likes of Marcus Smith and the Curry twins have been given the tag, recognised early on as the future of English rugby. As a result, it is not difficult to imagine that Jones sees Hodge as England’s long-term successor to Mike Brown in the full-back role.

Not representing Northumbria this season, the majority of Hodge’s rugby has come in National One with Darlington Mowden Park. Playing consistently for Garry Law and Danny Brown’s side, Hodge’s solitary Championship appearance was another example of a player whose upwards trajectory is nowhere near its peak.

“I know when he first joined up there were a few highlight reels that came out of him when he was at Sedbergh,” Falcons and Darlington teammate Simon Uzokwe said. “Seeing them, it became obvious he is a special player. Made his debut on Sunday, took his chances, scored an 80 metre-try. He is doing pretty well.”

Talking Rugby Union spoke to Hodge after a dominant performance for the England U20s against Italy in Bedford during last year’s Six Nations. It became clear that the teenager was simply taking everything in his stride.

“You can see that he is very intense in what he does, but in a good way.” Fearn said. “Not in a way where it is counterproductive for him and he is confident as well. Sometimes confidence can be portrayed as arrogance, but it is certainly not with Josh.

Although Hodge only made his Newcastle debut last weekend, it was clear to see that he would thrive in the Championship if given further opportunities. With the club hoping to secure their instant return to the top flight, Hodge could be a big miss for Dean Richards’ side.

“We’re quite lucky at the club at the moment, there is competition in every position, whilst he is away, I’m sure the boys will be filling in and playing,” Uzokwe said. “But, hopefully he is going to come back and have an impact on the team and get some more first team appearances.”

Flying out to Portugal for England’s warm weather training camp on Thursday with the rest of the squad, Hodge’s involvement with Jones’ team will be both beneficial to the player and his club. The debate over England’s long-term successor at full-back has been rumbling on for some time now and there is every chance that Jones may have already found him.