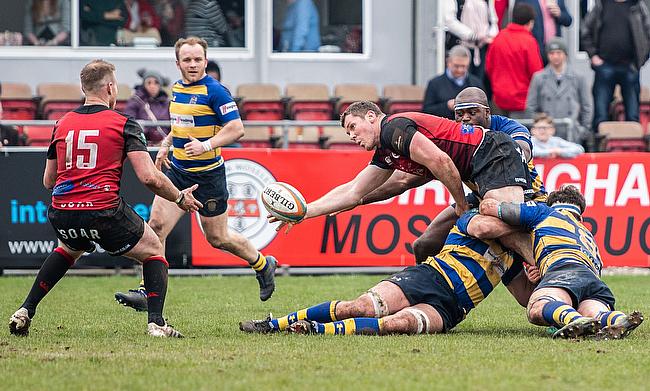 Birmingham Moseley and Bishop’s Stortford will enter December in better spirits as both clinched much-needed victories in Round 12 in National One.

Loughborough Students remain at the foot of the division, but they picked up two valuable points in their defeat against league leaders Blackheath.

In terms of the table toppers, ‘Club’ are now one point clear at the summit as the battle for promotion took another twist on the weekend.

Old Elthamians, Ampthill & District and Rosslyn Park are still firmly in the title race after their respective victories on Saturday, but Caldy lost ground following their defeat to Rotherham Titans.

Blackheath kept themselves at the top of National One by earning a bonus-point win over Loughborough Students in a thrilling contest.

Tries from Harry Bate, Freddie Owen and Henry Staff put Blackheath 25-15 up at the break, with Harry Newborn and Jack Moates scoring for Loughborough.

Newborn’s second try helped level the scores up after half-time, but Harry Fry and the excellent Joe Tarrant both crossed for the hosts to give ‘Club’ a 39-25 lead.

A try from Oskar Hirskyji-Douglas gave Loughborough two bonus-points, but the Midlands side remain at the foot of the table while Blackheath are one point clear at the summit.

Old Elthamians extended their unbeaten run to six matches as they edged past Cambridge away from home.

Gavin Lach’s side remain in the thick of the title race and three tries at Volac Park secured their eighth victory of the season.

OE’s have that winning feeling https://t.co/dFFn3DKzJc@ElthamiansRFC

A try from Sam Yawayawa and two penalties from Laurence Rayner had put Cambridge ahead, but Old Elthamians responded through Fred Hosking – who added to Charles Dockery’s first-half score.

The hosts, who had Mike Ayrton making his 200th appearance for the club, went back in front thanks to the boot of Jack Green, but a late try from Alex Brown ultimately secured the victory for the visitors.

Chinnor fly-half Craig Holland scored a late try as Matt Williams’ side clinched another dramatic victory to stay on the coattails of table toppers Blackheath.

Holland opened the scoring for the home side, before Will Bordill dotted down twice to give Chinnor a commanding lead at half-time.

However, the game was flipped on its head after the break. Three tries in 10 minutes from Sale FC’s Ryan Parkinson, Tom Ailes and Connor Doherty brought the game level and set up an exciting final quarter.

And it was Chinnor who dealt the decisive blow as Holland grabbed his second to seal the win for the hosts, who are now just two points off the leaders.

Ampthill and District made it five games without defeat as the Bedfordshire side beat Darlington Mowden Park to strengthen their promotion bid.

Ampthill’s Sam Baker opened the scoring with the first of six tries for hosts before Jon Kpoku, Maama Molitika, Aleki Lutui and Spencer Sutherland all crossed to put the A’s 33-3 up at the break.

Lutui’s second ensured the victory at Dillingham Park, but the visitors did spark into life after the interval to earn a bonus point.

A brace from Shaun McCartney plus tries via Brandon Asher-Wood and Callum Mackenzie made the score line more respectable for DMP, but the damage had been done in the first period.

Rosslyn Park put last week’s loss to Esher behind them by securing an excellent win against Plymouth Albion at Brickfields.

It was the hosts who shaded proceedings in the first 40 as tries from Dean Squire and Connor Eastgate put Albion 14-10 up, with Adam Bellamy barging his way over for Park.

However, the second half belonged to the visitors and they set the tone immediately after the interval.

A second penalty from Lound was followed by Stewart Magurie’s effort before Arthur Ellis dotted down to put Park in control.

George Mills hit back for Albion, but it was only a brief recovery as a Henry Robinson try and a Harry Leonard penalty wrapped up the win for Kieran Power’s side.

Rotherham Titans ended November by reigniting their promotion ambitions as they hit back from 24-14 down to claim an away bonus-point victory over rivals Caldy.

After Josiah Dickinson, Michael Barlow, John Collister and Martin Gerrard had crossed in an excellent first period for Caldy, their advantage evaporated in the second 40.

Rotherham Titans came out on top in a 62-point humdinger at the weekend. “The boys have character,” says head coach Joe Barker https://t.co/2xm65S4hA7 @RotherhamRugby @nca_rugby pic.twitter.com/nGpKWin2qB

Callum Irvine and Harry Dunne both crossed in the opening half for the Titans and it was first blood to the visitors after the break as Zakery Poole went over.

Nick Royle’s sensational length of the field score kept Caldy eight points ahead, but Daniel Leake and Seb-Nagle Taylor’s scores clinched the win for Rotherham, who are now six points behind Blackheath.

Bishop’s Stortford ended a run of five straight defeats as they battled hard to earn a victory over Cinderford at Dockham Road.

Andy Long’s side had not tasted the winning feeling since the beginning of October, but their triumph in Gloucestershire means Stortford are now out of the bottom three.

After going ahead through Rob Duff’s try in the first period, Stortford’s Tom Banks landed two penalties in the second-half as the visitors sealed a welcome victory.

Birmingham Moseley secured a vital win in National One and moved to the cusp of the safety positions following an away victory against rivals Esher.

Lewis Bean and James Williams helped Moseley lead 23-9 at half-time and tries via Nick David as well as Sam Pointon sealed the win in the second period.

FT: Esher 21-38 Birmingham Moseley – Scores from Nick David and then Sam Pointon with the BP try.

Thank you for the great support yet again, safe journey home and see you all back at Billesley next week when we take on Plymouth Albion. #comeonmose #phew

But it wasn’t all plain sailing for the visitors after the break as Esher mounted a fightback.

Robert Dudley-Jones and Matt Lowes both crossed to give the hosts some hope, however, Moseley’s excellent display in the first-half proved to be the difference.