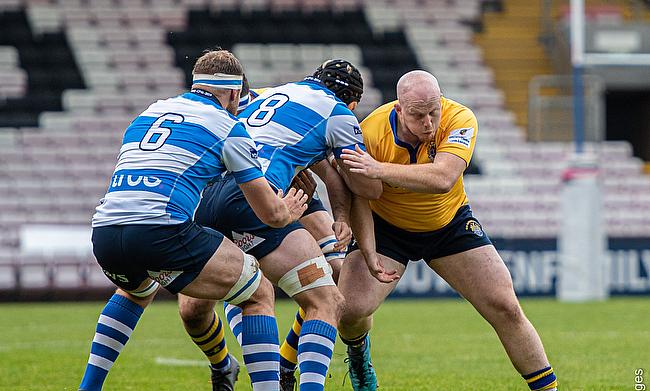 Rams RFC missed the chance to stay in touch with league leaders Richmond as they suffered a second defeat on the bounce. Photo Credit: (Ian Carter)

Seb Reynolds’ side were beaten by Bishop’s Stortford in challenging weather conditions at Silver Leys and that result opened the door for Darlington Mowden Park to move into the top three.

The North-East outfit extended their winning streak to three matches as they battled past Canterbury and they also took advantage of Cinderford not playing as their game with Hull Ionians was postponed.

Blackheath were also able to move up the division following a fine win away at Plymouth Albion and after suffering defeats last time out, both table toppers Richmond and second-placed Rosslyn Park returned to winning ways in Round Eight.

Elsewhere in National One, Sale FC are out of the drop zone after defeating Cambridge at the CorpAcq Stadium.

Richmond bounced back from their first defeat of the campaign as they outclassed Rotherham Titans in Yorkshire.

A first-half try from prop David Banfield and eight points from the boot of Rob Kirby put the league leaders 13-3 up at half-time.

Sam Hollingsworth landed his second penalty of the afternoon for Rotherham shortly after the restart, but Richmond were able to coast to victory when Ross Grimstone crossed.

Steve Hill’s men stay three points clear at the summit, but this was the ideal response after last week’s setback.

Rosslyn Park remain hot on the heels of table toppers Richmond as they came from behind to beat Birmingham Moseley at the Rock.

Park found themselves 16-14 down just before the hour, but two penalties from Craig Holland and a try by Owen Hughes helped the hosts to victory.

Dan Laventure and Greg Lound both went over in the first period to give Park a 14-6 half-time lead, however, Moseley hit back after the break.

A third kick of the afternoon by Cliffie Hodgson – plus a penalty try – put the away side in front, but Park were able to turn the game around whilst Moseley had to settle for a losing bonus-point after Aquile Smith dotted down late on.

Darlington Mowden Park are up to third in National One after grinding out a victory over Canterbury.

Tries from Ollie Hodgson and Brandon Asher-Wood, as well as a penalty by Warren Seals, put the away side in control at the interval.

Today’s results mean that next Saturday’s game against @rosslynpark will be 3rd v 2nd in the National One table!

But Canterbury rallied in the second half as a try from Jamie Stephens, plus a conversion and penalty from Tom Best, saw the hosts cut the deficit to just four points with half an hour remaining.

However, the City Men were unable to add to their tally as DMP used all their experience and quality to see out the contest and seal a third win on the trot.

Blackheath were able to keep pace with the early frontrunners in National One, despite surviving a late scare against Plymouth Albion.

Tries from Harry Fry (2), Leo Fielding and Tom Williams gave ‘Club’ a 26-5 lead with less than 15 minutes remaining at Brickfields.

Sam Daly had scored Albion’s first try of the afternoon and his side hauled themselves back into this encounter as Koree Britton’s score and a penalty try set up a tense finale.

With the visitors down to 14-men too, the momentum was with Plymouth but the hosts couldn’t snatch a late victory as Blackheath held on to move up to fourth in the division.

Bishop’s Stortford clinched their first home win of the campaign as they beat Rams RFC at a rainswept Silver Leys.

With the heavy rain making conditions difficult, Stortford built a 6-0 lead from the tee with Brad Burr kicking two penalties in the opening period.

Louis Ellis landed a penalty for the Rams following the restart, but Stortford increased their advantage as Baxter Wilson crossed.

Ellis pinged over another three points for the visitors, however, the home side were able to stay in control when James Ayrton dotted down

Conor Corrigan kept Rams alive in the contest as he darted over to make it 18-11, but a drop-goal from Burr ultimately sealed the victory for Andy Long’s side.

Old Elthamians returned to winning ways in National One as they ground out a victory over Chinnor.

Tom White and Laurence May exchanged penalties in tough weather conditions at College Meadow, but OEs had the lead at the break thanks to Mike Kovacic’s try.

Nathan Morris’ score just after the hour gave the hosts some breathing space and a second penalty from White put the game beyond Chinnor.

The away side did give themselves a glimmer of hope when Danny Barnes capitalised on White’s yellow-card as the Chinnor centre darted over in the final 10 minutes, but they were unable to add to their total as OEs saw out the victory.

Sale FC have jumped out of the relegation places in National One as they beat Cambridge on their own patch.

After a scoreless first half in which Cambridge controlled possession, Sale FC sparked into life after the interval as Andy Hughes and Raphael Quirke both crossed.

James Williams kicked 10 points as he landed both conversions and two penalties, whilst Cambridge only troubled the scoreboard in 56th mintue thanks to Lawrence Raynor’s penalty.