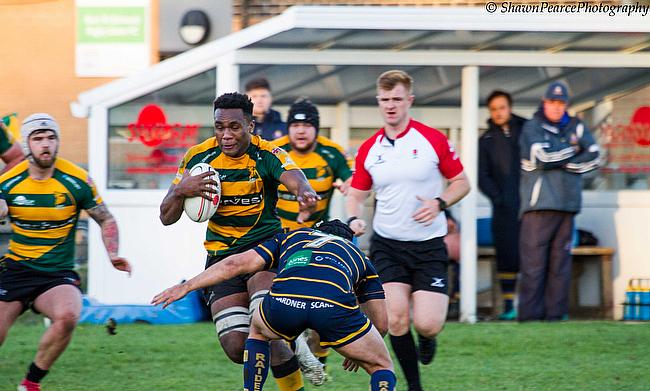 Earlier this year, Northampton Saints announced the signings of Karl Garside & Tui Uru and having both made the transition from the National Leagues into the Premiership, we caught up with the duo at Franklin’s Gardens.(Photo Credit: Shawn Pearce)

For Northampton Saints, their story of the summer has been away from Franklin’s Gardens.

Since the beginning of August, the club have been mentioned in numerous newspaper and online articles thanks to one of their stars; Lewis Ludlam. The 23-year-old’s inclusion in England’s World Cup squad was a surprise to many, not least Ludlam, whose future with Northampton was in doubt 12 months ago.

However, the arrival of Director of Rugby Chris Boyd galvanised the back-rower and Ludlam took the opportunity presented to him and didn’t look back.

Ludlam wasn’t the only young player that caught Boyd’s eye last term. The likes of Rory Hutchinson, Ollie Sleightholme, Fraser Dingwall and George Furbank all burst on to the scene and this season, two of Boyd’s newest additions will be hoping to follow suit.

Both Karl Garside (Prop) and Tui Uru (Back-Row) were announced as permanent signings before the end of last season having plied their trade in the National Leagues with Ampthill & District and Bury St Edmunds, respectively.

Lewis Bean also joined the club from National One outfit Birmingham Moseley and along with Garside and Uru, impressed during their appearances for Northampton Wanderers in 2018/19.

“At the moment, I am incredibly excited to be involved,” Garside told ncarugby.com. “Obviously, there is the big difference for me coming from Ampthill & District who were a semi-pro set-up to now coming into this fully pro set-up so I am loving getting involved in the professional environment.

“It was a bit of a mad month me coming straight in and training at the end of last season! I really enjoy working with Chris [Boyd]. He is all for giving players opportunity if they deserve it and if they are performing well, he will give you a chance to prove yourself. It is exciting and I am just trying to soak up as much as I can at the moment.”

Garside ended his time with Ampthill in the best possible fashion as the Bedfordshire side clinched a superb promotion to the Championship following a number of strong seasons in National One.

The A’s squad included the likes of Tonga internationals Alexi Lutui and Soane Tonga’uiha as they confirmed the league title on the final day of last season and Garside admits his move to Ampthill from Old Albanian in 2017 was crucial in his personal development.

“I always hoped to make this step up,” said Garside. “It is a lot of players’ dreams to come up and keep going.

“I was with OAs and we eventually went into National One. I went up another level with Ampthill who were towards the top of Nat One before they ended up winning it so I was really fortunate to be given the opportunity to step up again.

“Ampthill were hoping to go up the season before, but it didn’t quite go our way. However, last season we were really pushing and it was just a great feeling to come out on top of that league.

“Coaches like Paul Turner really put his knowledge across in a really good way and they had a load of Tongan internationals like Alexi and Soane who helped, especially at scrum time.

“They had loads of experience under their belt playing at pro and international level so I really enjoyed learning from them and I feel if it weren’t for me going to Ampthill and progressing myself up another level, I might not have been in the right position to get the opportunity.”

Whilst Garside has gradually progressed up the English rugby pyramid to reach the top table, for Uru, it has been a giant leap.

The powerful back-rower began his rugby journey at Ipswich, but revealed a career in the sport was never on his radar when he was younger.

Uru said: “I was just playing for fun at Ipswich. The opportunity then came to do a bit of county stuff and I played England Counties U20s. I wanted to see where it went and Bury St Edmunds picked me up. I committed a bit more time towards it and then here we are!”

Uru and Gardside were both involved with England U20s Counties during their successful tour of the Netherlands in 2017 and Uru’s rise in National Two South didn’t go unnoticed.

In the two years he spent with Bury, the Fijian showcased his power and explosiveness whilst learning a great deal in the fourth tier of English rugby.

“At that level, there were a few players who have played at this level coming down and the same with the other players coming up so they all had something to give in National Two South,” said Uru who has joined the Saints academy on a senior contract.

“We had our coach, Nick Wakers [Wakley], who is obviously well known so he had loads of stuff to give. I really enjoyed by time there and there was no training session ever wasted. I am quite excited to see where they go this year.”

Uru will be watching from afar this season as Bury aim for another solid campaign in National Two South, but for the 22-year-old, he is looking forward to his next individual chapter.

“I sort of felt towards the end of my time with Bury that I was getting more comfortable with it and I wanted to challenge myself a bit more,” he said. “I didn’t think I would make this big of a step, but it is here and I am taking it in my stride and going with the flow.

“I am soaking it all in at the moment. Pre-season is just the time to tick all the boxes. There is just so much to learn from all the players around me so if the opportunity comes again, I will take it. It is baby steps and if a chance comes along, I will definitely grab it with both hands and run with it.”