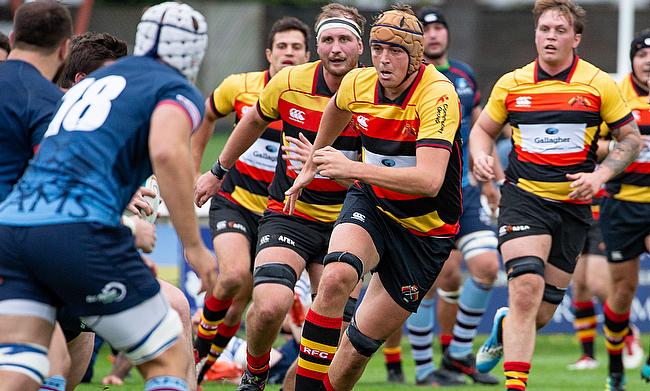 The title race in National One has been the main talking point of the division for most of the season and this weekend, the top two face off when Rams RFC host leaders Richmond. (Photo Credit: Dante Kim Photography)

After suffering their first loss of the National One season, league leaders Coventry bounced back to demolish Esher 57-12 to extend their healthy advantage at the summit of the division. The Midlands club then went on to lose only two more fixtures before winning the title by 19 points ahead of Darlington Mowden Park.

Cov’s surge to the Championship had shades of Hartpury’s dominating 2016/17 promotion campaign, but over the last two years, the competitiveness towards the top of National One has been reignited.

The likes of former England internationals Jeremy Guscott and Will Carling have tweeted their thoughts on the gripping title race which is currently unfolding in the third tier and even last year’s battle for promotion was equally as intense. Ampthill & District and Old Elthamians took the fight down to the final day of the season before the A’s prevailed and this 2019/20 campaign could well follow suit.

As things stand, the top three clubs in the division are separated by just three points, with points difference only splitting league leaders Richmond and Rams RFC as the duo prepare to clash at Old Bath Road this weekend.

With 12 games remaining in the season, this Saturday’s fixture in Berkshire could go a long way to deciding who will be lifting silverware in April and Richmond Director of Rugby Steve Hill is more than aware of how important Round 19 is to both sides.

Gearing up for Saturday’s top of the table clash 🆚 @Rams_RFC with a flashback to our 37-22 victory in October! 💛❤️🖤#ThisIsRichmond #Nat1 pic.twitter.com/38BbCjrwpM

“Even a couple of weeks ago, you had Cinderford losing against Canterbury and you may have paid a lot of money to back the other way so that makes it enticing.

“Without a doubt, this weekend is an important game for both us and Rams. There is an awful lot of rugby still to be played, but without a doubt, Saturday’s game will have a particular focus because of where both teams are at the moment and I think we are only focused on this Saturday. What comes after that, comes after that and our hope is to go there and put in our best possible performance.”

Richmond have put themselves in a position to be one of the leading candidates for the title this term, but heading into the campaign, the stories around their relegation back to the third tier could easily have become a distraction.

Yorkshire Carnegie’s financial issues were well documented following the conclusion of the 2018/19 Championship season as the club reportedly owed player wages as well as other costs. Richmond were keen for the RFU to enforce a punishment on the Leeds-based outfit due to their money troubles (which may have seen Richmond return to the second tier in place of Yorkshire) but their appeal was unsuccessful.

Hill told ncarugby.com in the summer that it was key for his squad to fully focus on National One and as we approach the final 10 games of the term, Richmond are firmly in the race to challenge for an immediate return to the Championship.

“I am very pleased for a couple of reasons,” adds Hill. “Firstly, the guys managed to park the situation we had throughout the summer.

“We also probably had one of the biggest changes in personnel in my time here because we had three or four players retire. Three other players went full-time so when we went to [Darlington] Mowden Park on the opening day, I think nine of the 20 lads were new players which is a very large number for Richmond.

“It certainly hasn’t been perfect. The loss against Sale FC and particularly the home loss to Plymouth Albion were very disappointing, but the pleasing thing is, the guys have bounced back from that and I have a sense at the moment that the guys are playing with a lot of confidence.”

Impressive wins over Chinnor and Blackheath either side of the Christmas break have kept Richmond’s title challenge on track and a thumping 86-7 victory against Hull Ionians last time out was the perfect preparation ahead of Rams RFC on Saturday.

Before their triumph over the I’s, Hill was present at Chinnor’s Kingsey Road to watch Rams clinch an excellent 21-17 win and the Richmond Director of Rugby has picked out a key quality in his title rivals.

“They are very well coached,” adds Hill. “Seb Reynolds is an excellent Director of Rugby. I think the other thing that makes them so dangerous is they play with no fear. They wanted to secure their status in National One and they have already done that so now anything else is a bonus. They are a very good side, well organised and very well structured and I think for us it will be a huge challenge this weekend.”

Hill’s thoughts are echoed by Rams RFC’s Jak Rossiter, who has been with the club during their journey to National One.

The winger played a vital part in their promotion campaign last year as he ran in 18 tries as the Rams created club history and their performance in their maiden season in the third tier has been nothing short of sensational.

“We went into this year saying that everything that happens this season is a win because we are here experiencing it all,” Rossiter tells ncarugby.com. “Any success we get, that is an extra gift on top. I think the fact that we can go into games almost completely pressure free and go out and chuck the ball around makes a massive difference.”

Other clubs in National One recruited heavily in the summer in order to compete for the title and promotion to the Championship so when Rossiter admits Rams only made small changes to their squad during the off-season, it makes their story this term even more remarkable.

Head coach Seb Reynolds has stuck to the club’s principles during his tenure and the close-knit nature of his side has been a major reason behind Rams’ rise up the rugby pyramid.

“I think the main thing is the club is made up of a bunch of friends who have been there and grown up playing with or against each other in the same region all the way from under-7s to where we are now,” says Rossiter.

“We brought in a couple of guys and they were guys who asked to join the club so it is nice for us to say we have got to where we are with the same group of boys for the last four or five years. It will be shown by the guys who will be running out this weekend. The average number of caps for the club will be over 50 and most of those caps have been won by playing with each other and that is quite satisfying to be able to say.

“There is that real sense of camaraderie and a real sense of a group of friends who just genuinely enjoying playing for each other. Whilst the results are obviously important, it is less important as the fun you have playing with your mates every weekend. We have just taken everything in our stride.”

Rossiter was one of very few Rams players to have experienced National One before the club’s promotion last season having plied his trade at Richmond for four years. He was also part of the side which clinched the title back in 2015 and now the winger is looking forward to facing his former club once again.

Whilst Hill has been open about the magnitude of this Saturday’s game, unsurprisingly, Rossiter and Rams have not wavered from their stance. They continue to just enjoy the ride but surely, if they were able to defeat Richmond, the squad and the Old Bath Road faithful may allow themselves to dream of successive titles and another piece of history for the club.

“Our aim has never been for promotion!” Rossiter continues. “We are still absolutely pinching ourselves as to where we are! To be honest, I was sat there at the start of the season thinking it was going to be a really tough year and we’d have to really work hard to win the odd game or two, but all the boys have stepped up amazingly.

“The big thing is most of the boys are enjoying the opportunity to play against sides like Richmond. Richmond are a Championship team, and by all rights, should still be a Championship team this season. The fact that we get to run out this week and play against them is brilliant. That has always been the message to just go out and enjoy the experience and that hasn’t changed.”