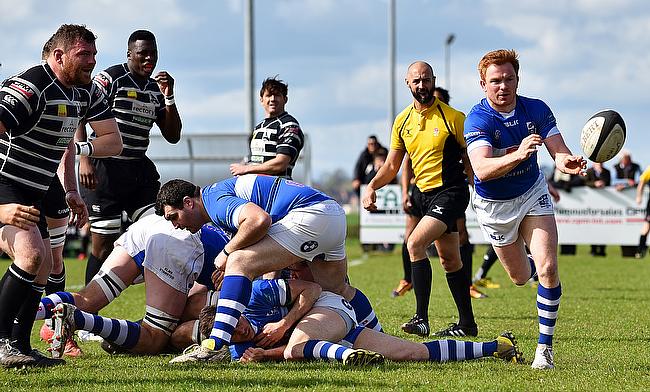 We were treated to a brilliant round of National One action to begin October as the division produced some outstanding results across the board.

As things stand, only five points separate the top 12 sides in the third tier as the unpredictable nature of National League rugby continued on Saturday.

The current front three are Chinnor, Old Elthamians and Caldy and all of those sides were beaten in Round Six which emphasises how wide open this league already is.

Chinnor moved back to the top of the National One table despite slipping to a defeat against Bishop’s Stortford at Kingsey Road.

Caolan Ryan pinged over two penalties as the hosts went into the interval 6-0 in front.

However, a penalty try put Stortford ahead and two penalties from debutant Manu Vunipola put the visitors in control.

Chinnor then exerted pressure on the Stortford try line, but Andy Long’s side stood firm to secure their third win of the campaign.

Sale FC and Old Elthamians scored six tries apiece, as the hosts came from behind to seal their 18th consecutive victory at Heywood Road.

However, OEs fought back to take a 24-14 advantage into the second half following scores from Tom White, Ben Howard, Charlie Self and Hamish Barton.

Brilliant day down at @SaleFC yesterday. Just about recovered from one of the most bonkers game I’ve been involved with. Atmospheric clubhouse after to watch the first fixture for @Sale1861Women. Top performances across the club! #onesalefc #Nat1

Both sides exchanged scores on two occasions after the interval as Sale’s tries via Odogwu and Adam Aigbokhae were cancelled out by Nathan Morris and Alex Brown.

This pulsating contest was still in the balance with just under a quarter of the game remaining and it was Sale who came up trumps in the final 20 minutes.

Odogwu clinched his hat-trick before Jack Moorhouse completed the victory for Sale who have now moved into the top half of National One.

Plymouth Albion kicked off October with a welcome victory at Brickfields as Kieran Hallett’s side defeated Caldy.

Tries from Dan Powell and Paul Davis helped Albion to a 10-7 half-time lead, with Nick Royle going over for Caldy.

Harrison Crowe was yellow-carded for the visitors after the restart and Plymouth capitalised as George Mills and Jon Dawe touched down, with Fraser Honey converting both scores.

Royle offered an immediate response for Caldy as he grabbed his second try, but the Wirral side could not add anything further to their tally as Albion clinched the win.

A late Callum Mackenzie try snatched a victory for Darlington Mowden Park in an enthralling encounter with Birmingham Moseley.

The visitors led 22-19 at half-time as Josh Hall, Jordan Poole and Mackenzie crossed, with scores from Jay Tyack and Robert Lewis as well as a penalty try being the response for Moseley.

After James Williams had levelled the game from the tee, Sam Pointon and Matt Dudman swapped tries to keep the contest tied at 29-29.

Moseley then thought they had rescued a draw as Joe Duffy’s try was wiped out by Pointon’s second score, but there was to be one final twist at Billesley Common as Mackenzie broke away to steal a victory for Danny Brown’s side.

Cambridge held on to beat Ampthill and District to become the first side to clinch a victory at Dillingham Park this season.

Richie Williams’ men took a 10-3 lead thanks to Alex Rayment’s try on the stroke of half-time to add to Ben Penfold’s earlier penalty.

Michael Wilson’s boot moved Ampthill back to within four points after 64 minutes, but the A’s turned down three more kickable penalties in favour of kicks to the corner and their decisions didn’t pay off as the Blood and Sand triumphed in Bedfordshire for the second year in a row.

Esher gained their second victory of the season with a narrow win over Cinderford at a rainy Molesey Road.

Harry Hone rumbled over in the first period as a scrappy first half ended 7-3 to Cinderford, with Paul Roberts landing a penalty for Esher.

The hosts capitalised on some below-par kicking from Cinderford and fashioned a move which was rounded off by Graham Logan to put them 10-7 ahead.

Cinderford tried to break down Esher for the rest of this contest, but the home side weren’t to be denied as they held on for the victory.

Blackheath came from behind to beat local rivals Rosslyn Park at Well Hall.

‘Club’ trailed to three Greg Lound penalties, but Nick Foster replied on his home debut to make it 9-5 heading into half-time.

The hosts went in front after the interval when Jake Lloyd broke through to touchdown.

Lound and Elliot-Clements Hill both nudged over penalties for their respective teams before Lloyd grabbed a superb second to put Blackheath in control.

Lound did ping over a fifth penalty of the afternoon for Park, but another goal from Clements-Hill wrapped up the win for James Shanahan’s men.

Rotherham Titans have clinched back-to-back wins thanks to a six-try victory over Loughborough Students.

The Titans, who were relegated from the Championship in April, began the scoring through Ellis Abrahams and held a 17-0 advantage at the break following tries from Connor Dever and Harry Dunne.

Connor Field’s score extended the lead in the second period before Loughborough scored their only points of the match through Harrison King.

However, Rotherham would end this contest with a flourish as Alex Dolly and Callum Irvine completed the scoring.