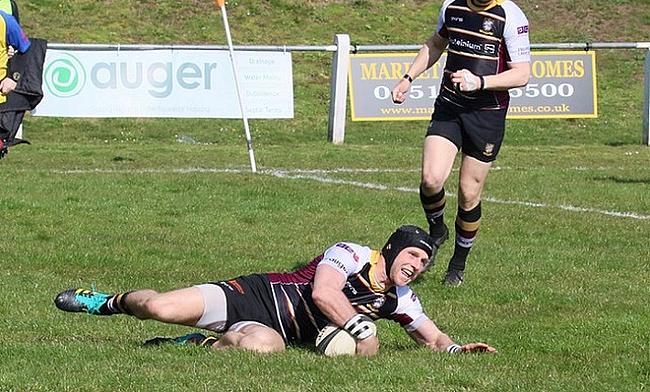 Caldy winger Nick Royle feels the National Leagues would be a viable option for England’s 7s stars to continue playing after the RFU announced it would be dropping its sevens programme. (Photo Credit: Derek Salisbury)

Five months after being crowned champions of National Two North, Nick Royle and his Caldy side should have been counting down the days until the start of the new season.

Instead, the Covid-19 pandemic has delayed the beginning of the 2020/21 term and rather than discussing the upcoming National One campaign with Caldy’s flying winger, we decide to chat about the current situation surrounding the England sevens programme.

In a career which includes a spell in rugby league with Widnes as well as a stint with Sale Sharks, Royle also represented England sevens for four years before moving back to the XV-a-side game and into the National Leagues.

Last week, the RFU announced it would be dropping its sevens programme due to the financial impact the coronavirus crisis has had on the sport, with England’s Rugby Football Union reportedly set to lose over £100m as a result of the pandemic.

The decision means England’s sevens players will be out of contract at the end of August and also, their hopes of competing in next summer’s Olympic Games have been dealt a significant blow.

Royle, who played alongside current sevens stars Dan Norton and Dan Bibby, sympathises with his former teammates and colleagues involved in the programme.

“It is a shame,” he told ncarugby.com. “At the end of the day, that is people’s jobs; playing sevens. The organisation has had to make cuts to save money and it is just unfortunate that the sevens teams had to go for now so I do feel for them because they will now be looking for work.

“Hopefully they can find some clubs in the meantime where they can play rugby whilst they get jobs and earn that income. The situation is so, so difficult for everyone and that is within rugby and non-rugby.”

In a recent interview with Talking Rugby Union, Richard de Carpentier admitted he was ‘chatting to as many clubs as possible’ to find a route back into rugby, but striking the right balance between playing and providing for his family was key for him.

Having featured in the World Series for England during his successful time with Fylde, Royle stepped back into the National Leagues in order to continue playing at a high standard, but also, it allowed him to spend more time with his family and he believes moving into tiers three and four would be a good option for any of the current England sevens stars.

He added: “Some of those players will be looking around and they may be looking to get into the Premiership and Championship level to play at a decent standard.

“Even National One, there are clubs there that will pay decent money and will want them playing in their teams. That could keep them going until the RFU hopefully gets more money so they can take on the sevens team again. National One is a good standard and so are the National Leagues. There are some good teams there and they are playing some really good rugby so the standard would be great for them.”

Only time will tell to see whether any of England’s sevens players will make the move into the National Leagues, but for Royle, the third tier is something he is relishing whenever the new campaign can begin.

Caldy were already crowned champions of National Two North before the suspension of the 2019/20 season following 25 wins from 25 matches and the RFU confirmed the club’s inevitable promotion via their ‘best record playing’ formula back in March.

Royle has also recently signed a new two-year contract at Paton Field, keeping the 36-year-old on the Wirral until at least 2022 and staying with Caldy wasn’t a difficult decision for the prolific winger to make.

“Yeah it was very strange,” Royle said when asked about the early conclusion to the last campaign. “We were all looking forward to celebrating at the end of the season together.

“I have played for some pretty brilliant clubs to be fair, but Caldy are probably the best club I have been at for squad tightness. Everyone gets on. There are no cliques and I love playing for them.

“I feel good so why stop playing?! I just love rugby. It has been my life. It is all I have done since I left college. I went into professional rugby in Super League then went to Sale and then the sevens and then back into the National Leagues. It is all I know and I just enjoy being around the lads, enjoy the craic and enjoy rugby.”

After a one-year absence, Royle and his Caldy side made an immediate return to National One and they will be hoping to maintain their stay in the third tier.

The Wirral outfit were relegated on the final day of the 2018/19 campaign following a season blighted by injures but after a phenomenal term in National Two North, Royle feels this current Caldy side are more than capable of cementing themselves in a higher division.

“Caldy is a good club,” Royle said. “Not many people come into the club from outside the area. A lot of them are local players that have grew up around Caldy. Sometimes we might not be as good as some of these other clubs who have got guys in from academies, but because we are such a good bunch of lads and tight knit, it makes it an enjoyable team to play in and we always work for each other.

“I think this is best team Caldy have had from memory, or maybe overall. Even when we came down from National One, we have just strengthened as a team and we are probably playing some better rugby now as well so we are looking forward to going up and the challenge that faces us next year as well.”