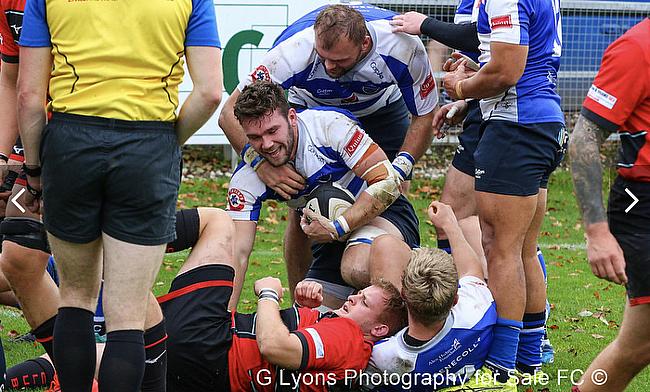 OEs produced arguably their best performance of the campaign whilst Sale responded from a tough day at the office against Rosslyn Park to see off ‘Club’ at the CorpAcq Stadium.

It was six of the best for league leaders Richmond who edged past Bishop’s Stortford to maintain their excellent start to the season whilst the aforementioned Rosslyn Park beat Plymouth Albion.

Both Rams RFC and Chinnor climbed the division last weekend after superb wins over Hull Ionians and Cinderford whilst elsewhere, Darlington Mowden Park left it late to seal a victory at Rotherham Titans and Cambridge picked up a confidence-boosting result against Canterbury.

Richmond overcame a spirited Bishop’s Stortford fightback to secure their sixth consecutive victory in National One.

Tries by Toby Dabell and Cam Mitchell in the first-half helped the visitors into a 15-7 lead, with Dan Elsom replying for Stortford.

We've got just the two tries to relive from Saturday's victory over @BSRUGBY – but both were special! 💛❤️🖤#ThisIsRichmond #Nat1 pic.twitter.com/s6Hq94psop

However, the home side hit back as Tom Walker’s penalty and a try from Mike Ayrton saw Stortford edge in front.

But, Rob Kirby’s superb accuracy from the tee this season continued at Silver Leys as a penalty 12 minutes from time sealed another victory for the league leaders.

Rosslyn Park are continuing to hunt down table toppers Richmond as they sealed a bonus-point win over Plymouth Albion, who had John Kelly sent-off.

Joe Munro went over for Rosslyn Park in the first-half and Greg Lound kicked a hat-trick of penalties, whilst Sam Morley nudged over three points for the away side.

Alex Ducker’s try gave Albion a route back into this contest after the break, but a second yellow-card shown to Kelly meant the No.8 was dismissed.

Dave Lewis immediately capitalised on the extra man advantage to touch down and despite Javiah Pohe crossing for Plymouth, Henry Robinson and Dan Laventure were able to secure the victory for Park.

Rams RFC eased past Hull Ionians to move up to third place in National One.

Max Titchener had also landed a penalty for the visitors, but the Rams were able to pull clear in the second period as a penalty try was followed by scores in the final quarter from Niall Kidd and Ollie Taylor.

Chinnor are up to fourth in National One as they defeated old foes Cinderford thanks to a strong second-half display at Dockham Road.

Josh Hodson dived over for Chinnor after two early Cinderford penalties, but the hosts were able to hold a lead at the break as Nathan Taylor and Sam Smith both dotted down.

Will Harries was able to pull one back for Chinnor on the stroke of half-time and the away side took the lead following the restart as Hodson rounded off a slick team move.

Luc Jeannot crossed to increase Chinnor’s advantage, but Cinderford fought back when Taylor grabbed his second score of the afternoon.

The hosts missed the conversion which would have edged them ahead and as they pressed for a winner, Chinnor were able to regain possession which resulted in Will Flinn wrapping up the win for Matt Williams’ side.

Old Elthamians produced their performance of the season so far as they ran in six tries to comprehensively beat Birmingham Moseley at College Meadow.

Tom White and Ollie Claxon kicked 13 points between them whilst Ben Palmer’s early penalty proved to be Moseley’s only score on a disappointing afternoon.

A late try from Ben Dixon proved decisive as Darlington Mowden Park chalked up their third successive victory thanks to this battling win over Rotherham Titans.

The centre latched on to a superb pass from former Titans man Callum Irvine to snatch the win for DMP which ended Rotherham’s 100 per cent home record.

The game was level at 10-10 at the interval as a penalty try and three points from the boot of Rotherham’s Sam Hollingsworth was cancelled out by Ollie Hodgson’s effort as well as a penalty from Warren Seals.

The aforementioned Hollingsworth and Seals swapped penalties after the break, but there was to be a late twist as Dixon dived over to clinch another victory on the road for Danny Brown’s charges.

Sale FC bounced back from their loss against Rosslyn Park in emphatic fashion as Jonathan Keep’s side produced a ruthless display to see off Blackheath.

The visitors had come into Round Six having won three of their last four fixtures, but Club were second best at the CorpAcq Stadium.

Tries from Jarad Willaims, Andy Hughes, Dan Birchall, Fergus Mulchrone and Jack Moorhouse did the damage for Sale, whilst Chris Johnson had another solid day at the tee.

Blackheath crossed through Leo Fielding and Josh Poole whilst Mark Cooke landed two penalties on a tough afternoon for James Shanahan’s side.

Cambridge prolonged Canterbury’s wait for their maiden National One win as the Blood and Sand picked up a thrilling bonus-point victory in Kent.

Tries from Matt Hema, Joe Green, Alex Rayment and a brace from James Martin saw Cambridge return to winning ways in style as they moved out of the bottom three.

Ben Penfold added nine points with the boot, whilst Canterbury’s only score came on 79 minutes when Tristian King dotted down.