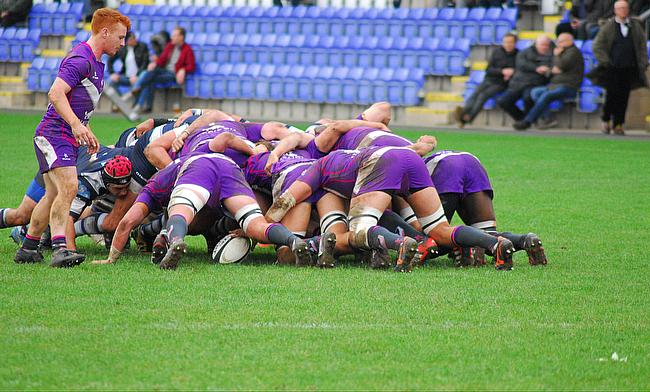 The three sides embroiled in a relegation battle in National One kept their survival hopes alive as they all picked up crucial victories in Round 28.

Old Albanian and Loughborough Students are still in the drop zone, but triumphs against Old Elthamians and Bishop’s Stortford keeps them in touch with Hull Ionians, who left it late to beat Rosslyn Park.

Just above them, Esher picked up a welcome victory away at Cambridge as they moved closer to securing their status in this division for next season while Caldy produced an excellent display against Blackheath.

At the top, champions Coventry fell to just their second loss of the term as they were beaten away at Ampthill and District while there were wins for Darlington Mowden Park and Plymouth Albion in the race for second spot.

Newly crowned National One champions Coventry suffered only their second defeat of the campaign as they were beaten by Ampthill and District at Dillingham Park.

The visitors edged a tentative first half and Scott Tolmie’s try helped them to a 7-0 lead at the break.

Ampthill reduced Cov’s advantage to just one point with two penalties from the boot of James Pritchard, but his opposite number Will Maisey slotted over a kick to make it 10-6.

However, this was to be the final score of the contest for Cov as Ampthill began to take control of proceedings while the away side’s ill-discipline held them back.

Two more penalties from Pritchard and tries via Joe Berics and George Thornton sealed the win for Ampthill who remain on course for their highest ever league finish.

Darlington Mowden Park moved a step a closer to ending the National One campaign in second place after brushing aside Fylde in their final home match of the season.

Warren Seals and Talite Vaioleti scored for the north-east side in the first half, with the latter grabbing his second after the break before Joe Craggs, Ben Frankland and Matt Heaton also crossed.

Connor Wilkinson replied for already relegated Fylde, but that was as good as it got for Warren Spragg’s men.

Rupert Freestone crossed in the corner for Albion, who then conceded a penalty which Oliver Allsopp converted.

The hosts extended their advantage when Devon Jewsbury scampered over, but two converted scores from Laurence Cowen and Sam Pointon gave Moseley a 17-14 half-time lead.

Sam Smith gave Moseley some breathing space as he went over for their third try, but Plymouth sparked into life as Sam Daly’s score cut the gap to three points.

With Plymouth pressuring the Moseley defence, the visitors finally cracked as Shepherd darted across to clinch the win for Kieran Hallet’s men in the final play of this contest.

Caldy notched six tries as they eased past Blackheath to dent the visitors’ hopes of a top four finish in National One.

Joe Tarrant nudged over two penalties for the away side in the opening quarter, but tries from Josiah Dickinson and John Collister helped Caldy into a 12-6 lead.

Blackheath fell further behind before the interval thanks to two penalties from Ben Jones either side of John Delwyn Jones’ try.

The hosts then took the game away from Blackheath after the restart and Nick Royle was the instigator as he scored a hat-trick to help Caldy to their ninth home win of the campaign.

Scores from Joe Tarrant and Harry Bate proved to be consolations for James Shanahan’s side who have dropped to fifth after this defeat in Cheshire.

Ben King and Nathan Morris touched down in the first period for the home side, but two scores from Alex Post and 10 points from the boot of Tom Bednall gave OAs a 20-14 half-time advantage.

And that’s it ! @ElthamiansRFC 29:34 @Old_AlbanianRFC totally deserved fantastic team effort from As to a man showed their heart and ability OE played their part but OA were hungry – great match ! @nca_rugby

Harry Elbrow went over for the visitors after the break but tries either side from James Golledge and Ollie Claxon put OEs 29-27 up.

Those two scores looked like being decisive, but Hamilton’s close range try stole the win for Old Albanian which leaves them six points off safety with two matches remaining.

Loughborough Students moved to within three points of safety in National One thanks to a bonus-point win over Bishop’s Stortford in the Midlands.

A try from Will Roberts saw Stortford lead 7-0, but scores from Andrew Boyce and Charlie Thacker helped the Students take a 10-7 advantage into the interval.

Oskar Hirskyji-Douglas and Jack Stapley (2) added touchdowns after the break, while Owen Waters kicked a total of seven points.

Josh Linney went over late on for Stortford, but the game was already over as a contest.

Esher bounced back from their defeat against Loughborough Students as they secured a hard-fought victory against Cambridge despite being reduced to 14 men.

Will Harding and Daniel Rowland scored in the first half for the away side after Ben Penfold had given Cambridge an early lead from the tee.

Matt Hema kept Cambridge in touch with Esher just before the break, but a red card shown to Oliver Mines gave the hosts a huge boost heading into the second period.

However, Harding, Niall Saunders and Chris Arnold scored second-half tries for Esher while efforts from Rob Conquest and Joe Green failed to secure a bonus-point for Cambridge as the visitors held on for the win.

Isaac Green kicked a late penalty as Hull Ionians sealed a crucial victory against Rosslyn Park in their fight to stay in National One.

Rosslyn Park opened the scoring, but penalties from Green (3) and Greg Lound plus a brace from Lewis Minikin gave Hull Ionians a 24-7 lead at the break.

The hosts clicked into gear after the restart and three converted scores saw them go 26-24 up.

Green knocked over his fourth penalty of the afternoon to edge the I’s back ahead, but another converted try for Park saw the game swing back in their favour.

Rikki Stout then made it 34-33 to the visitors with Hull’s third try, but Park thought they had clinched this see-saw contest with a penalty.

However, there was to be one final twist as Green kept his cool to seal a pivotal win for Hull Ionians which leaves them three points clear of the drop zone.