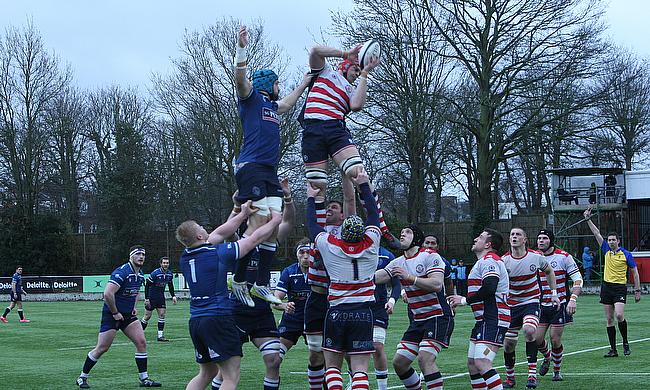 Storm Dennis really did go to town at the weekend. Causing half of the weekend’s games to be postponed, the rain resulted in pitches up and down the country being waterlogged and the winds resulted in serious health and safety concerns. (Photo Credit: David Whittam)

When Friday’s preview was released, we already knew that Plymouth had called off their home game against Cambridge in National 1, Otley had postponed their game against Luctonians and Leicester Lions’ visit from Redruth had been pushed back due to concern for players and spectators.

Despite the weather’s best efforts, there were still 12 games that took place over the weekend, so let’s take a look at what happened in the National Leagues this weekend.

League leaders Richmond made the relatively short journey to Old Elthamians and managed to pick up their tenth win in a row with a hard-fought 7-9 victory. Fly-half Tom Hodgson split the sticks on three occasions, with OE’s points coming from an Austin Hay try and Marc Koteckzy conversion.

Unable to get a bonus point, the deficit between Richmond and second place Rosslyn Park was reduced to six points after Park’s bonus point win over Darlington Mowden Park. Beating their visitors 26-12, tries from Parks’ Craig Holland, Gregor Gillanders, Arthur Ellis and a penalty try, contributed to a third win in four games.

Due to Rams’ postponed game against Cinderford, Chinnor have moved into third place. Beating Canterbury 7-0 in Kent, it was Ehize Ehizode’s eighth minute try that proved the difference, meaning that the Thame club have now won seven on the road in a row. 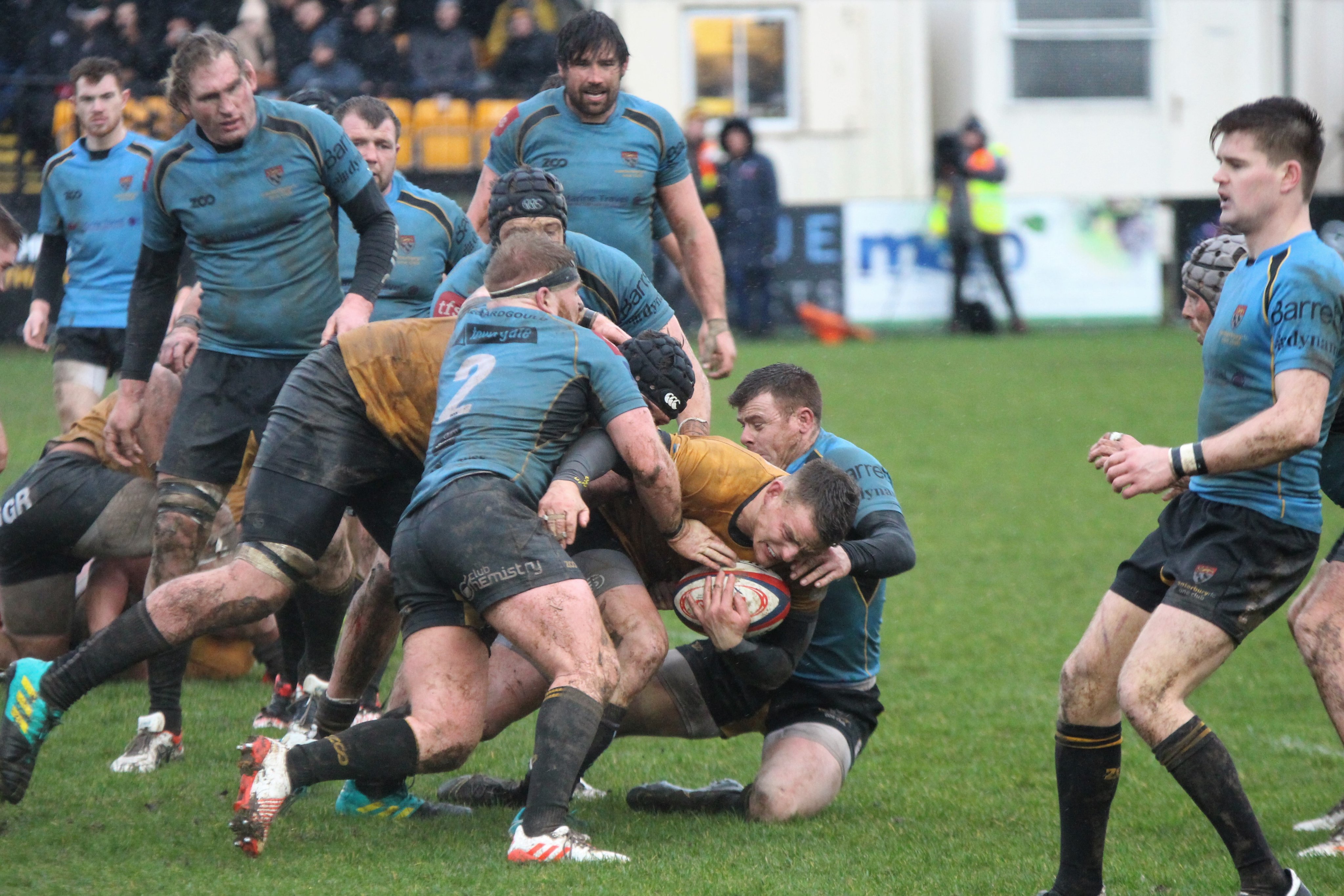 There was one draw this weekend. Bishops Stortford scored two unconverted tries in blustery conditions at Silver Leys. The first was from club captain Sam Winter and the second through George Keen after chasing a poor Blackheath kick. Already on the scoreboard thanks to Mark Cook’s first half penalty, Club leveled the tie as a result of their strong scrum, after several penalties close to the home side’s try line forced the referee to award a penalty try.

Finally, in National 1 Rotherham beat fellow strugglers Hull Ionians 26-10 at Clifton Lane.  Ben Robbins scored twice, Zack Poole registered one and it was replacement prop Toby Williams that dotted down for the bonus point score after the 80 minute.

Caldy registered yet another win in their unbeaten season, this time putting Fylde to the sword at the Woodlands. It was former Fylde wing Nick Royle that opened the scoring with a try in the corner, but it wasn’t until the second half that Adam Aigbokhae would extend Caldy’s lead further, his try being converted. Their lead was reduced by Jacob Conner’s converted score, but Gavin Roberts’ late penalty made Caldy’s lead unassailable.

As a result of Sedgley’s postponed game against Loughborough, Hinckley have now moved into third place. Beating Preston 3-33 in Lancashire, there was a hat-trick of tries from hooker Adam Johnson, as well as one score from wing Callum Dacey. 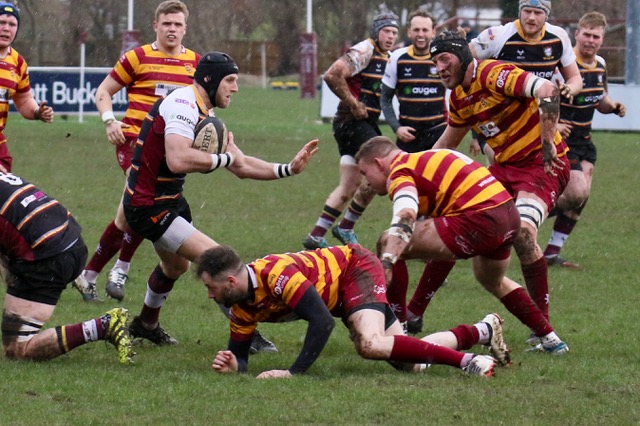 Tigers did have a brief spell of resurgence in the second half, Anthony Symcox and James Newman powering over to score. Simon Humberstone put the icing on Hull’s cake, scoring their final try of the day, also meaning that Lee Monk’s converted try for the visitors late on was too little too late.

With Taunton not playing at the weekend, Henley have moved back to the top of National 2 South after they beat Westcliff 29-5 at Dry Leas. It was one-way traffic in the first half, Henley registering tries through Thomas Emery, William Panday and Jack Robinson. Westcliff’s only score came from Christopher Bolton early in the second half, before another Thomas Emery try and one from Reuben Knight topped things off for the hosts.

Tonbridge are a point adrift of first place Henley, beating Old Albanian in a competitive 26-24 game in Kent, it took scores from Toby May, Hugo Watson and Ben Ashmore to overcome an extremely stern OAs challenge in miserable conditions. 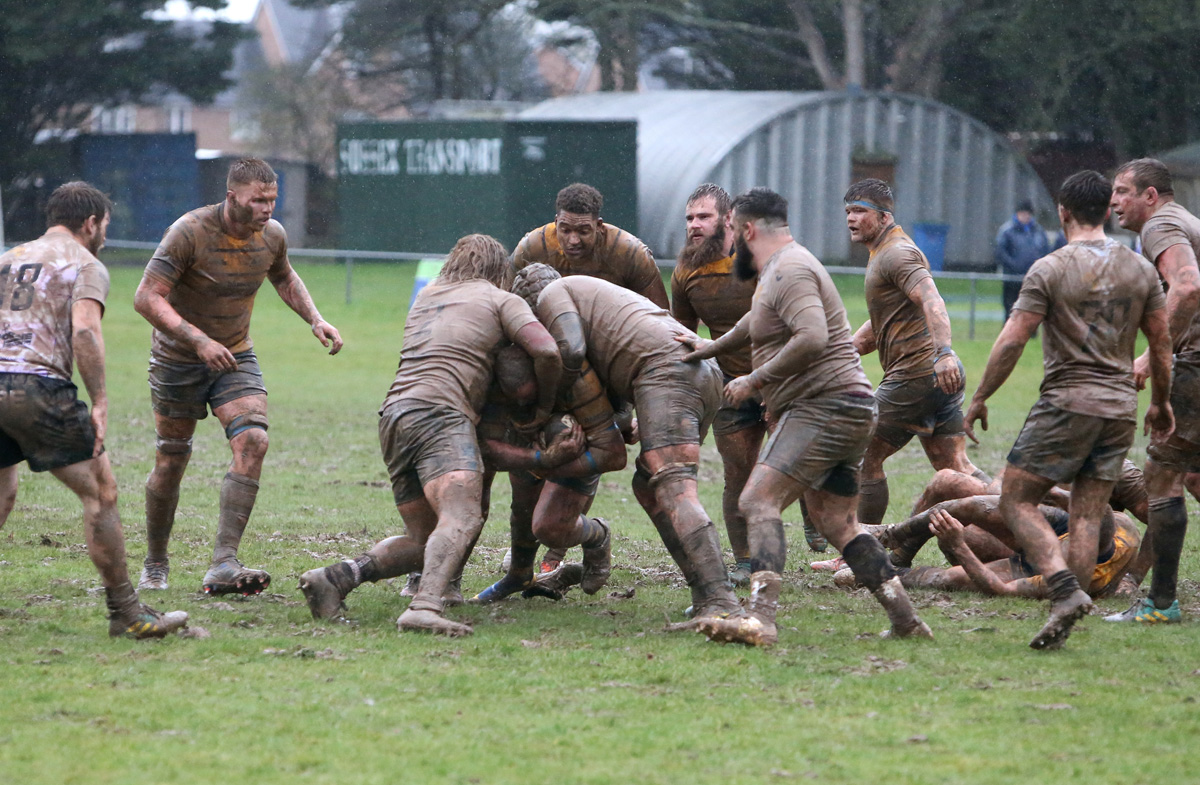 Away to Worthing, Clifton consolidated their place in fifth with a convincing 24-10 win. Three of their tries from debut winger Freddie Owlsey, the fourth was added by former England U20 flanker Jack Clement. Clifton only gave up a converted try and a penalty on their way to a well earned win in Sussex.

The final game in National 2 South saw Bury St. Edmunds pick up five points on the road at Sutton & Epsom. By the half, BSE had a 22-5 lead after efforts from Ciaran Leeson, Tom Brown, Michael Stanway and Georgi Gidionov. Not letting up, the visiting side scored further tries through Ben Leng and Tommy Waldock, whilst Sutton & Epson added to Jack Belcher’s first half try with another from lock, Matt Harwood.