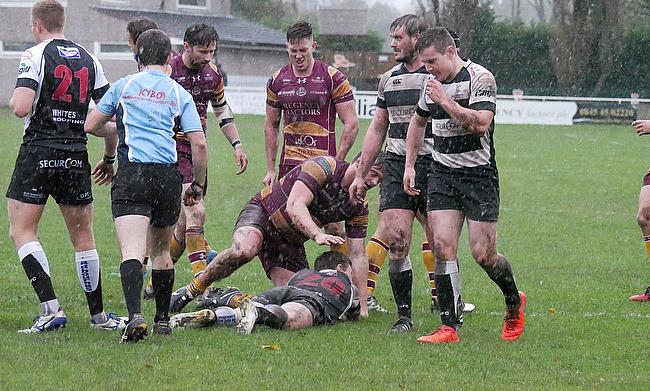 The final fixtures of the 2017/18 National League season were completed over the weekend and both matches were significant.

In National One, Plymouth Albion secured back to back top three finishes after coming out on top against Loughborough Students while in National Two North, the small matter of relegation was still to be decided.

Luctonians knew they had to pick up a bonus-point win against Sale FC at Moritmer Park to stay in the division and despite an excellent second-half performance, the Herefordshire side couldn’t achieve the victory meaning their fate was sealed.

Plymouth Albion scored five tries to clinch a bonus-point win over a battling Loughborough Students to finish the National One campaign in third place.

Loughborough, who had secured their safety in the division at the end of April, found themselves 14-7 up thanks to tries from Will Attfield and Luke Frost while Matt Shepherd crossed for Albion.

However, the hosts fought back with Jamie Salter going over just before the break.

A third try through Robbie Weeks gave Albion the lead, but Loughborough responded as Will Foster touched down.

But with Albion needing to win to seal a top three finish, their class shone through as Shepherd along with Lewis Pearson took the game away from the Students to clinch the bronze medal for Kieran Hallett’s side.

Luctonians have been relegated from National Two North despite a spirted performance against newly crowned champions Sale FC.

Ryan Watkins’ men needed to pick up a bonus-point to avoid the drop, but they were left with a mountain to climb at half-time as Sale led 19-7.

Tom Ailes (2) and Chris Johnson both crossed for the visitors before Adam Clayton squeezed over to give the Lucs a foothold in this contest.

It was first blood to the hosts after the interval as Joe White dotted down from close range, but Sale were able to extend their lead to eight points via a Johnson penalty.

"YOU GAVE IT EVERYTHING, SO PROUD TO BE A LUCTONIAN."
One Luctonian absolutely sums up the feelings of the whole club. Now read more of those comments and view previously unseen video footage of the closing minutes of… https://t.co/0OJyNiIYln

The home side continued to press, and they were given hope when Ben Barkley crossed on 74 minutes.

Sale, who had also lost Joe Kelly to the sin-bin, were now up against it as Lucs pressed, but the hosts couldn’t fashion another clear-cut chance meaning their eight year stay at this level has come to an end.

Defeat for Lucs also meant safety for Wharfedale who were the only side which Luctonians could have caught while Sale completed the season with a 23rd successive victory.