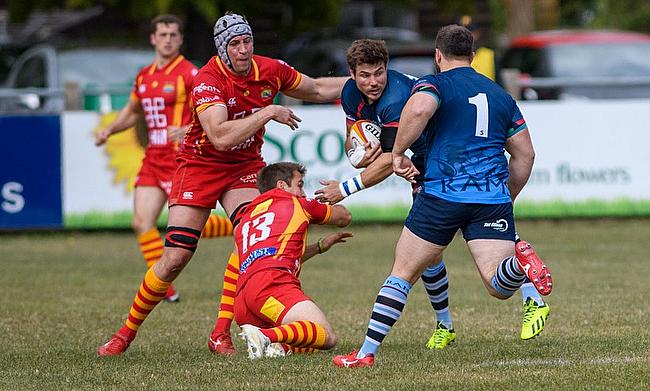 Newly promoted Rams RFC are enjoying their maiden outing in National One as Seb Reynolds’ side defeated Birmingham Moseley in Round Two.(Photo Credit: Chris Fell)

Moseley came into the weekend as the early league leaders having thumped Hull Ionians on the opening day, but the Rams were clinical and resilient against the Midlands club as they earnt their second win on the spin.

Cinderford are now the new table toppers in National One after clinching a late victory against Plymouth Albion whilst Rosslyn Park and Richmond picked up eye-catching wins.

Elsewhere, Darlington Mowden Park brushed aside Hull Ionians and Cambridge battled to an excellent win at Bishop’s Stortford whilst Blackheath narrowly beat Canterbury and Rotherham Titans secured their first victory of the season against Sale FC.

Cinderford sealed a dramatic victory and moved to the summit of National One following a pulsating encounter against Plymouth Albion.

Ed Bogue and George Porter scored tries to help the hosts into a 17-8 half-time lead,

Two wins out of two for @cinderfordrfc with former Gloucester player Joe Mullis getting their late try at the weekend #glawsfamily https://t.co/Yl7YKJgZpW

Terence Babarinsa and Sam Smith both crossed to give the home side a 21-point advantage, but Plymouth roared back at Dockham Road.

Dan Powell, Pierre Thompson and Alex Ducker all went over to level the game, but there was to be a late twist as Joe Mullis scored a last-gasp try to snatch the victory for Cinderford.

Rosslyn Park maintained their winning start to the campaign with a narrow victory over Old Elthamians.

Tries from Nick Scott and Mike McFarlane put the visitors 17-10 up at the break, with Fred Hosking replying.

OE’s Ollie Claxon and Park’s Craig Holland swapped tries at the beginning of the second-half, but Mike Kovacic’s effort tied the scores at 24-24.

However, the accurate boot of Greg Lound was able to steer Park to victory as his third and fourth penalties of the afternoon sealed an impressive win for Kieran Power’s side.

Full-back Rob Kirby inspired Richmond to a win over Chinnor, which continues their solid return to National One.

Chinnor did hold a 7-6 interval lead thanks to Josh McNulty’s try, but Kirby’s boot and the scores from Liston and Banfield wiped out Will Harries’ second-half effort at the Athletic Ground.

Birmingham Moseley staged a dramatic fightback against Rams RFC, but it wasn’t enough as Seb Reynolds’ side secured their first home win of the season.

An interview from Seb Reynolds Head Coach of RAMS Rugby??by the @TheRugbyPaper.?? Who discusses @Rams_RFC performance against @MoseleyRugbyFC at Old Bath Road yesterday.?? The Rams played some magnificent rugby and had an outstanding defence throughout.??@nca_rugby pic.twitter.com/peTWRXkN5z

John Davetanivalu hit back before the break for Moseley, but Jak Rossiter’s effort just after half-time kept the Rams in the box seat.

However, Rob Povey and Davetanivalu went over as the visitors mounted a late challenge, but the hosts held on to earn back-to-back victories.

After falling to a late defeat in Round One, Darlington Mowden bounced back in impressive style as they outclassed Hull Ionians to clinch their first win of the campaign.

Ben Frankland, Ollie Walker, Will Montgomery and Max Pepper were the other names on the score sheet as the away side were rampant at Brantingham Park.

Ben Stephenson’s 12th minute try was all Hull Ionians could muster up as their difficult start to life back in National One continued.

Cambridge held out to a win a nine-try thriller against Bishop’s Stortford as the visitors also sealed their first victory of the new term.

Former Cambridge man James Ayrton surged over for the hosts’ opening try, but Andrew Henderson hit back to help the Blood and Sand into a 10-7 lead.

Ciaran Moore extended their advantage, but Mike Ayrton (again ex-Cambridge) crossed to keep Stortford in touch at the interval.

However, tries from George Bretag-Norris, Alex Rayment and Henderson allowed Cambridge to surge clear with Brad Burr slotting over a penalty in reply for Stortford.

With the home side trailing 36-15 in the final 10 minutes, Cambridge’s Ben Adams was shown a yellow card and Stortford took advantage of the extra man to score two quick-fire tries through Will Roberts and Jake Spivey, but there was to be no late twist as Richie Williams’ side clinched the win.

Blackheath secured their opening win of the 2019/20 National One season after a thrilling victory over Canterbury at the Marine Travel Ground.

Jarvis Otto had crossed for Canterbury in the first period and the City Men burst into life following the break as Aiden Moss and Dwayne Corcoran both scored to cut Blackheath’s lead to just three points.

But, tries from Craig Dowsett and Harry Fry put the visitors back in control, while Canterbury’s late penalty try, along with Aaron Cooper’s effort, was only enough to clinch two bonus-points for the hosts.

Rotherham Titans put their Round One defeat to Rosslyn Park behind them as they produced an excellent display to see off Sale FC.

The hosts held an eight-point interval lead with tries by Ben Robins and Sam Hollingsworth, while Chris Johnson landed two penalties for Sale.

The Titans raced clear in the second half and secured their bonus-point as Harry Newborn and Anthony Maka both crashed over.

Jonty Rawcliffe and Johnson did score for the away side in the final four minutes, but they were merely consolations.