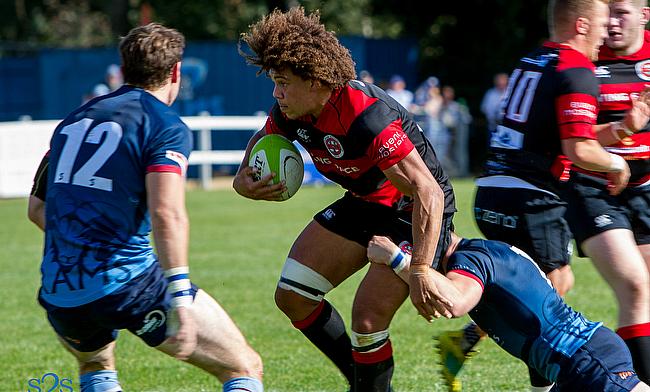 Rams RFC’s challenge for top spot in National One suffered a setback in Round 21 as they were beaten by an impressive Blackheath outfit. Photo Credit: (Paul Clark)

Following promotion from National Two South, Seb Reynolds’ side have continued to defy the odds this season but their remarkable title bid has taken a knock over the last three weeks.

Successive home defeats have left the Berkshire club eight points off the top whilst league leaders Richmond strengthened their own promotion ambitions with an excellent win away at Cinderford.

Rosslyn Park have jumped back into second spot after beating Cambridge, but Kieran Power’s side are seven points behind the table toppers as things stand.

Down at the bottom, Birmingham Moseley boosted their hopes of avoiding the drop following a bonus-point victory over Canterbury whilst rivals Rotherham Titans lost to Chinnor in a pulsating contest at Clifton Lane.

Elsewhere, there were victories for Old Elthamians, Sale FC and Bishop’s Stortford.

Richmond remain seven points clear at the top of National One as they secured a bonus-point victory over Cinderford.

Cinderford struck first with a try from Sam Smith, but Richmond hit back almost instantly as Tom Hodgson landed a penalty.

Full-back Louis Lynagh scored a superb individual try to give Richmond the lead and a score from Hodgson gave the table toppers a 15-3 advantage.

The hosts did reply before the break as James Dean sniped his way over, but that was as good as it got for Cinderford.

Hodgson’s second try and a brilliant score from Toby Saysell wrapped up the win for Steve Hill’s side in Gloucestershire.

Arthur Ellis scored a hat-trick as Rosslyn Park comfortably beat Cambridge at the Rock to move up to second in the National One table.

Scores from Ellis and Richard Cheeseman put Park in front and a penalty try extended their lead to 19-7 at the break.

The aforementioned Cheeseman was yellow-carded before the interval and Cambridge took full advantage of the extra man as Mike Mayhew added to Matt Dawson’s earlier score to cut Park’s lead to five points.

However, Dan Laventure, Ellis (2), Cheeseman and Benji Marfo all added second-half tries for Park whilst Fin Creighton replied for Cambridge.

The only negative on an otherwise pleasing afternoon for Park was a neck injury to fly-half Harry Leonard.

Rams RFC’s title hopes suffered a setback in Round 21 as Blackheath claimed an impressive victory at Old Bath Road.

Tries from James Catt and James Lloyd, either side of Kieran Leicester’s effort and a flurry of penalties, put Blackheath 17-8 up at half-time.

After the restart, Rams flipped the contest on its head as Jak Rossiter scored two excellent tries to give the visitors an 18-17 lead.

However, ‘Club’ produced a response and scores from Nick Foster and Lloyd secured the win for Blackheath whilst fly-half Mark Cooke kicked 11 points for his side.

Defeat for the Rams leaves them eight points off the top whilst Blackheath’s third win on the bounce keeps them in fifth place.

Chinnor’s excellent recent form away from Kinsgey Road continued on Saturday as they sealed a bonus-point win over Rotherham Titans.

A penalty try, plus scores from Jason Worrall (2), Nick Selway and Kieran Goss, gave Chinnor a commanding 35-5 interval lead, with Tom Benjamin going over for Rotherham.

But the Titans looked a different side after the break as they ran in three tries through Connor Dever, Ben Robbins and Benjamin to salvage a bonus-point at Clifton Lane.

Matt Marley’s second-half effort was enough to confirm the win for Chinnor whilst defeat for Rotherham leaves them 12 points from safety.

Old Elthamians held off a Darlington Mowden Park fightback to clinch a hard-fought win in an excellent contest at College Meadow.

Euan McKirdy went over twice in a second-half controlled by Darlington Mowden Park, but despite long spells of possession, pressure and territory, they couldn’t complete the turnaround as OEs’ superb defensive effort helped them over the line.

Plymouth Albion’s perfect start to 2020 came to an end as Sale FC returned to winning ways in National One.

Jonathan Keep’s side did have to come from behind against Plymouth to claim their latest victory at the CorpAcq Stadium as despite scores from Jack Moorhouse and Johnny Leota, Sale trailed 13-12 at the break.

Moorhouse’s second try immediately after half-time gave Sale the lead, but the hosts were only 19-18 ahead when Plymouth’s Jamie Salter crossed for an unconverted try – to add to earlier efforts from John Kelly and Josh Skelcey.

However, the Devonshire outfit were able to move in front as Skelcey grabbed his second of the afternoon, but with seven minutes remaining, Sale ultimately clinched victory when Jarad Williams barged over from close range.

Fly-half Chris Johnson landed a superb conversion as Sale held out for their eighth home win of the season.

Hull Ionians’ immediate relegation to National Two North edged closer in Round 21 as Bishop’s Stortford picked up a welcome victory at Silver Leys, despite having JP Nel sent-off.

Smith went on to complete his hat-trick after the break, but the hosts were reduced to 14-men when Nel was dismissed for a high tackle.

Moses Liwaliwa and James Sanderson both scored for the I’s, either side of the red card, but they left Hertfordshire empty handed.

Mike Umaga’s side are now 32 points from safety with two games in hand, whilst the win for Stortford puts more daylight between themselves and the relegation scrap.

Birmingham Moseley boosted their survival hopes in National One, but they had to come from behind to clinch a vital victory against bottom of the table Canterbury.

The hosts flew out of the blocks at The Marine Travel Ground, but ill-discipline proved costly as Moseley secured the win which leaves them 12 points clear of the drop.

Cliffie Hodgson, Morgan Monks and Louis Roach grabbed a score a piece, whilst a penalty try had opened the scoring for Moseley.

Efforts from Ricky Macintosh and Tyler Oliver had given the City Men the perfect start, but this proved to be another frustrating afternoon for Andy Pratt’s men.