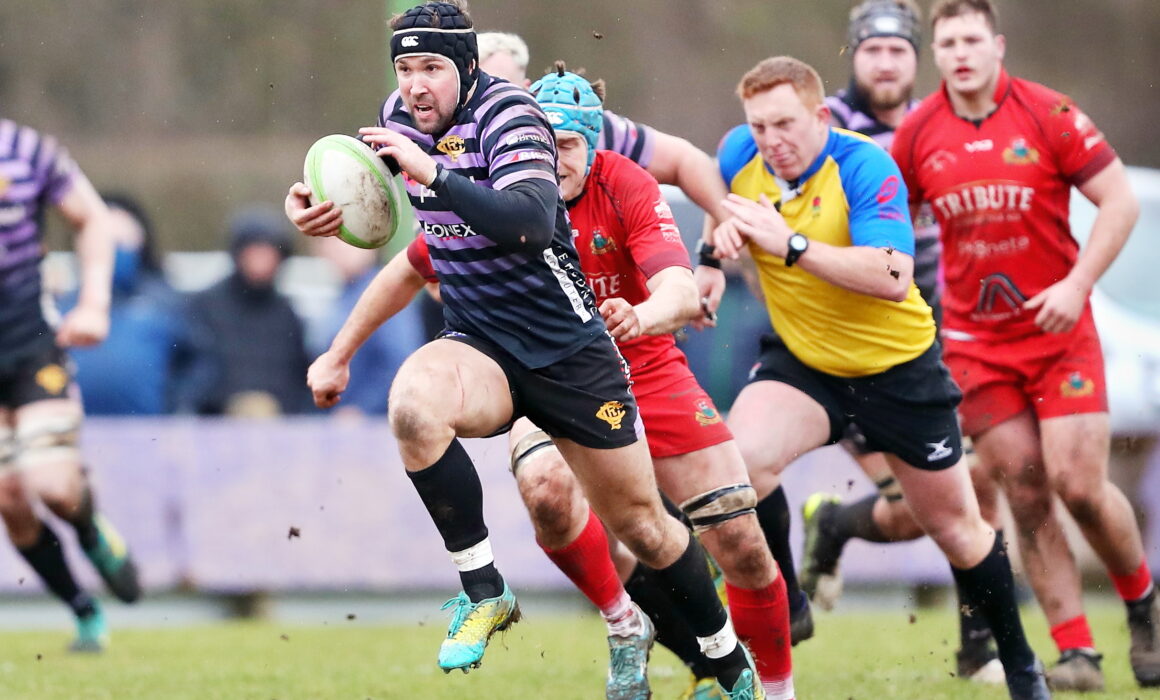 Round 20 of the 2021/22 National League Rugby season did not disappoint. There were top of the table changes and shock results, read how the action played out below. (Photo Credit: Ian Clark)

Rams produced the shock of the round by beating Rosslyn Park 13-27 at The Rock. A close encounter, Park took a lead going into the break as a result of a Kyle Traynor try and Craig Holland penalty, Rowan Grundy’s five-pointer sandwiched between the home scores. A try for Henry Bird and a penalty try secured the win for the road team, Charles Pipers’ try securing a losing bonus point for Kieran Powers’ side.

Fifth-place Cambridge subjected Blackheath to a 34-7 loss at Grantchester Road, scoring six tries on Saturday afternoon, Billy Walker, Jake McCloud, Kwaku Asiedu, Harry Johnston and Will Wand crossing the whitewash, whilst Dominic McGeekie registered a try for the away team in the 67th minute.

In Oxfordshire, Caldy picked up an impressive win on the road at Chinnor. Gareth Davies’ side have now moved within seven points of Rosslyn Park, Mike Cartmill’s late try securing the result. 10-0 down at half-time, Chinnor fought back with Max Titchener and Kieran Goss dotting down, before Ben Jones’ placekicking and Cartmill’s score all adding up to a 12-23 win for the northwesterners.

Much like the rest of the chasing pack in National 1, Cinderford ended their game as the winning side. Making the trip to Plymouth Albion at Brickfields, Reece Boughton opening the scoring with a penalty, before James Williams scored a try to make it 3-8 at half-time. Matthew Lane and Nathan Taylor secured the 13-20 victory, Dan Pullinger’s converted try meaning that Albion got a losing bonus point.

A 13-try thriller was played out as Sale FC bested Taunton Titans 40-50 in Somerset. An enthralling encounter, the scores were level at the 50-minute mark – each side having scored five tries each – before back-to-back Jack Metcalf scores but the game to bed.

Making the trip to Loughborough Students, Hull picked up a comprehensive 39-0 victory at Epinal Way. Duell Trueman and Sam Crane both got braces for the visitors, as Reece Dean, Harvey Harding and Benjamin Boothman also crossed the try line.

After taking the lead early on thanks to two Mark Ireland in Birmingham, Sheffield Tigers hardly looked back in their clash with Bournville. First-half scores came from Sam Down and Lee Monks, and although the hosts did take a three-point lead at one stage, a second Down try and one for Nicholas Bingham sent Tigers back to South Yorkshire in high spirits with a 21-30 scoreline.

After beating Harrogate 75-0 the weekend prior, Luctonians again conceded no points to the Yorkshiremen in their round 20 encounter. Ito took until the 30th minute for the deadlock to be broken, Owen Randell kicking two penalties and Thomas Smith, Sam Jones and Josh Nott dotted down in the 0-21 win.

Rotherham Titans maintained their chase for top spot thanks to this 40-12 triumph over Hull Ionians. Lewis Minikin kicked all the points for the I’s, whilst Kieran Curran, Callum Bustin, Sam Boxhall and the faultless kicking of Matt Minogue did the rest.

At Park Lane, Sedgley Park Tigers kept Blaydon scoreless to win 31-0 in Greater Manchester. In a largely flawless performance from the home side, Will Lees, Jamie Harrison, Danny Openshaw, Connor James and Rhys Henderson all went over the whitewash on Saturday afternoon.

It was a win for @SedgleyTigers at Park Lane yesterday as they beat @BlaydonRFC 31-0 in @Natleague_rugby #Nat2N to keep their promotion ambitions alive. RVR was at the game and caught up with Tigers’ captain Matt Riley @sedgleytruck shortly after the final whistle. pic.twitter.com/nFhRcnWl0W

Thanks to their first-half efforts, Tynedale were able to end the 80-minutes as 38-14 winners over Chester. Scoring three tries in the opening 40, tries for Jake Rodgers and Seamus Hutton in the second period meant that Ben Woods’ team went home happiest.

Despite ending the game with 12-men, Fylde went back to Lancashire as 10-20 winners over Wharfedale at The Avenue. Greg Smith was a major reason why the visiting team were able to pick up the win, kicking two penalties, scoring a try and converting two scores, full-back Tom Carleton with the first Fylde try.

Stourbridge’s trip to Huddersfield was called off as a result of Lockwood Park’s pitch being waterlogged.

Redruth have taken top spot in National 2 South thanks to their last-gasp 31-33 win over Clifton in Bristol. Luke Cozens got the hosts off to the best possible start after charging down a Will Trewin clearance kick and scoring. With less than 10 minutes to play, it seemed as though Clifton had won the game thanks to a Charles Powell try, but Fraser Honey’s penalty, try and conversion secured a win and top spot.

It was largely thanks to their forward pack that Bury St Edmunds beat Leicester Lions 27-21 in East Anglia. Taking a 14-7 lead into the break, Lions struck back thanks to scores from Devon Constant and Alex Wilcockson, but a late Levi Roper try, and Charlie Reed penalty, spelt success for Jacob Ford’s side.

A comprehensive Canterbury performance meant that Barnstaple left Kent off the back of a 52-22 loss. Following a competitive first half, Canterbury turned up the heat in the second half, scoring tries through Frank Morgan, Tom Best, Jesse de Vries, Tristan Kind and Will McColl.

Esher dropped down to second in the table as a result of their 17-39 loss to Henley Hawks. Peter Winterbottom’s side conceded three tries in the opening half an hour as their opposition ran the hosts ragged in Surrey, James Davies scoring two tries in the clash and Monty Bradbury making every kick look east from the tee.

Owen Thomas’ conversion of Michael Jamieson’s 67th minute try handed Guernsey a well-earnt win over Barnes on the Channel Islands. The West Londoners raced into an early lead, Jordan Souter scoring twice in the opening half an hour, Alex March adding the other. The 28-26 result was confirmed after Guernsey scored four second half tries as part of their comeback.

In Essex, Old Albanians survived a Rochford Hundred comeback in the second half. Racing to a 7-26 lead at the break after Thomas Stileman, Alex Noot and Nico Defeo tries, just prior to the break Maciu Nabogi’s effort meant that the hosts’ deficit was just 12. Despite the best efforts of Chris Dudman’s place kicking and Aston Bevans-Royston’s try, OAs went out of reach thanks to a second Defeo score, the game finishing 27-31.

Having had a 12-0 lead at the break, Westcliff were unable to withstand Hinckley’s second half resurgence. The hosts’ lead came as a result of Jack Hogarth and Seyi Ajeigbe’s opportunism, but Shae Nixon, Alex Salt and Toby Baldwin proved to be decisive in the clash, Hinckley walking away with a 12-22 winning scoreline.

Worthing Raiders defeated Dings Crusaders 50-39 on the south coast, the two sides scoring 13-tries between them. Cam Dobinson opened the scoring in the opening two minutes, the team’s trading tries until the 30-minute mark when the home side pulled away thanks to Will Scholes and Jack Forrest efforts. Dings took the lead briefly because of Harry Rowson and Thomas Hargan registering tries, before Jordan Turner-Hall’s side pulled away.