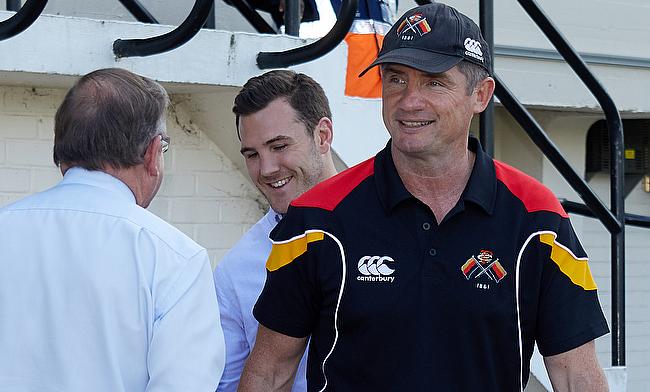 When any club suffers relegation following an arduous campaign, it is always tough for those involved but for Richmond, the sense of disappointment and frustration after finishing bottom of the Championship still lingers with just over two weeks until the start of the 2019/20 season. (Photo Credit: Roger Wooldridge)

Last term, the South-West London club finished three points adrift of Hartpury which concluded their three-year stint in the Championship, but it was not as simple as just turning their attention immediately to National One rugby.

Yorkshire Carnegie’s financial problems have been well documented over the summer as the club reportedly still owe players some of last season’s wages as well as other costs. Richmond were keen for the RFU to enforce a punishment on the Leeds-based outfit due to their money issues (which may have seen Richmond return to the Championship in place of Yorkshire) but their hopes were quashed 10 days ago.

The RFU were happy with the financial resolutions proposed by Yorkshire and Richmond’s Director of Rugby Steve Hill admits he and the club are still bemused by the outcome.

“I think it has been a very challenging summer,” he said. “I think everyone likes certainty and unfortunately the RFU gave us no certainty over the summer and we only recently got that certainty.

As the curious case of Yorkshire Carnegie continues, take a look at @joeharvey34’s article on events at the club from early last week.https://t.co/VZWNPHpYfp pic.twitter.com/IUVz1CdDPC

“Ultimately as a club, we are very disappointed with the RFU decision because we cannot understand why and we haven’t really been given the reasons why Yorkshire Carnegie remain in the league.

“That is very frustrating and added to that, the time it has taken to get to this point makes it doubly frustrating. We are where we are and we now look forward to a season in National One.”

Since the decision was made by the RFU, Yorkshire have signed former Leicester Tigers and Wasps winger Tom Varndell on a one-year deal which sparked more outrage in the rugby world and left Richmond increasingly baffled.

Hill told ncarugby.com: “I think the whole rugby public is bemused by this decision so it is not just us. For us, it has particular consequences from both a status and financial position, but I just think the whole rugby public are struggling to understand how a club that a week ago consisted of a Director of Rugby and one player/coach is going to be given half a million pounds by the RFU.

“There are many other clubs at the same level and levels below who have had all their funds cut and they are proper teams and clubs. The RFU is the leader of our game and we are all struggling to see where that leadership has been demonstrated in this particular situation.”

For now, Richmond have to settle for life in National One despite glaring unanswered questions which they want resolving.

Hill has been with the club for 10 years and was part of the coaching team in 2015/16 as Richmond earned promotion to the Championship following a superb campaign in the third tier.

??? “The squad have worked incredibly hard since the beginning of July + we’re now looking forward to putting that effort into live practice matches”

Get the latest ahead of Friday’s preseason match vs @Blackheath_1858 ?

Since then, the club have stuck to their principles. First and foremost, they are an amateur club and did not seek further investment to cement themselves in the Championship and their hashtag, #ThisIsRichmond, emphasises their local and one club philosophy. It is an approach which has worked for them in recent years and according to Hill, that will not change in National One this term.

“We are very much a rugby club, not a rugby team or rugby franchise,” said Hill. “We take great pride in that. We are very proud of the culture we have here and we fully intend to keep that culture.

“At the end of the day, Richmond were one of the first clubs to get it wrong 20 years ago [when they went into administration] and as club, we learnt a lot of lessons at that time. It is a pity some of the other clubs haven’t learnt their lessons like we went through.

“The key thing for us as a club is that we understand that the way we do things is because we want people to enjoy their rugby experience whether that is as a 1st XV player in the Championship or whether you’re a 5th team player who turns up every Saturday to play with his mate before having a couple of pints afterwards!

“We want to provide rugby for that whole range of people; men, women, young and old, so we are very determined to keep that as a model for our club.”

The ethos and platform Richmond provide has allowed players such as Will Goodrick-Clarke and Luc Jones to take their next steps into the professional game, but more significantly for Hill, he has been able to keep the bulk of his side together for the upcoming National One campaign.

Last season was arguably one of the most competitive years in the third tier with a cluster of teams all challenging for that coveted promotion place and Hill expects the competition to fierce on Richmond’s return to the division.

In the recent past, promotion races in #Nat1 have proved to be a procession for large portions of the season, but this year was a refreshing change and it was @AmpthillRufc who came out on top.

Our National One season review is here: https://t.co/OevMcz6vOX

“We recognise it is going to be a tough year,” he added. “We want to be very strong in National One. We have obviously been watching over the last few years and certainly the standards have continued to rise.

“For us, continuity is really important. Although we are really pleased that a few of our lads have gone off and got professional contracts, we also knew at the beginning of last season, that three or four of our guys were going to retire whatever happened.

“There are clubs within National One like Rosslyn Park, Old Elthamians, Chinnor and Darlington Mowden Park who seem to be spending a lot of money and attracting players to put together some very strong squads so I think it is going to be, yet again, a very competitive season.

“We are very excited and very determined to be pushing for that top spot.”

Richmond begin their campaign with a trip to Darlington Mowden Park on September 7th whilst also in the opening month of the season, they host Chinnor before visits to Blackheath and Hull Ionians.