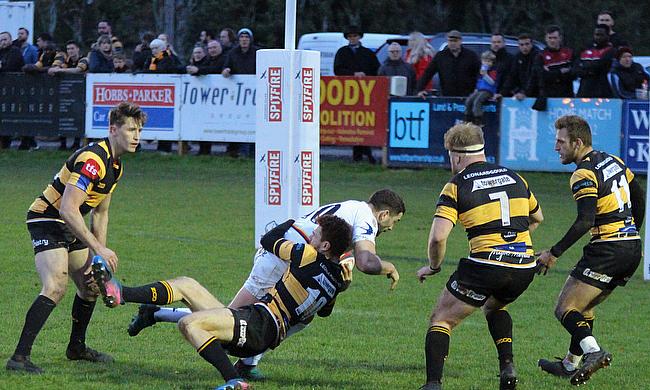 Richmond were able to stretch their lead at the top of National One after a sparkling bonus-point win against Canterbury. Photo Credit: (Phillipa Hilton)

Steve Hill’s men scored eight tries to record their ninth win of the campaign and following Rosslyn Park’s draw with Chinnor, it means Richmond are now seven points clear at the summit.

The league leaders face the aforementioned Park this coming weekend so the opportunity is there for Richmond to further tighten their grip on that all-important promotion spot.

Both Blackheath and Rams are now right behind Rosslyn Park after excellent victories over Cambridge and Rotherham Titans, respectively, whilst Old Elthamians’ good home form continued against Hull Ionians.

Elsewhere, there were home triumphs for Plymouth Albion, Sale FC and Cinderford.

Richmond extended their lead at the top of National One to seven points following an eight-try demolition of Canterbury.

With second-placed Rosslyn Park drawing with Chinnor, it means Steve Hill’s side now have some breathing space at the summit ahead of their clash with Park in Round 11.

Waking up on a Monday after a bonus point win..

Tom Hodgson (2) and Jesse Liston both crashed over for the visitors, with Louis Lynagh also crossing in the first period.

Caolan Ryan was able to snatch a share of the spoils for the away side as he kept his cool to slot the conversion.

Tries from Nev Edwards and Hugo Ellis, as well as five penalties from the boot of former Chinnor man Craig Holland, had given Park the chance to secure their third straight win.

But Chinnor – who crossed through Ehize Ehizode and Willie Ryan – were always in the contest and Matt Williams’ men were able to come away from the capital with a draw thanks to Worrall’s last-gasp score.

Blackheath’s good form in National One continued as they completed an excellent comeback to defeat Cambridge in a pulsating contest.

Tries from Gareth Baxter, James Martin (2) and Joe Green put Cambridge 24-10 up only after Leo Fielding had opened the scoring for Blackheath.

However, Cambridge once again saw a half-time advantage slip away from them as ‘Club’ battled back.

Jake Lloyd’s try provided the visitors with a spark before Fielding and Mike Perks both finished off flowing moves to wrap up a fourth successive win for James Shanahan’s men.

Connor Hayhow scored a hat-trick as fourth-placed Rams recorded their first away win since September against Rotherham Titans.

Seb Reynolds’ side led 14-9 at half-time at Clifton Lane thanks to tries from Hayhow and Conor Corrigan, whilst Titans No.10 Sam Hollingsworth kicked three penalties.

@Rams_RFC Congratulations on the win, sounds like we missed a great game!

Hayhow grabbed his second just before the hour and despite spells of pressure from Rotherham, the hosts just couldn’t find a way over.

Instead, Hayhow sealed his hat-trick eight minutes from time to confirm the victory for Rams whilst the home side did finally cross the whitewash through Anthony Maka, but it was merely a consolation.

Indiscipline hampered Hull Ionians at College Meadow and after an encouraging display at the beginning of the month against Rotherham Titans, the I’s are now 18 points adrift of safety.

Plymouth Albion returned to winning ways in Round 10 as they produced an excellent display to see off Birmingham Moseley.

Albion stormed into a 19-0 half-time lead with Sam Morley, Connor Eastgate and Dean Squire all crossing at Brickfields.

Moseley were improved after the interval, but too many unforced areas meant Adam Balding’s side lacked a cutting edge when they needed it most.

The Midlands club were able to score, though, with 10 minutes to go as the potent Aquile Smith dotted down, but Albion’s job had been done in the opening period.

Tries by Fergus Mulchrone and Raphael Quirke gave Sale FC their third home win on the spin as they ended Darlington Mowden Park’s unbeaten run on the road.

All the scores came inside the final quarter as Mulchrone latched on to Quirke’s excellent pass before it was the scrum-half’s turn to cross the whitewash.

DMP wing Ollie Walker struck back as he touched down in the corner and despite Sale finishing the game with 13-men as both Jarad Williams and Jake Pope were sin-binned, the hosts held on for another triumph at the CorpAcq Stadium.

Cinderford picked up their first home win for almost two months thanks to hard-fought victory over Bishop’s Stortford at Dockham Road.

The hosts led just after the first quarter as George Barton slotted over a penalty and Cinderford were able to carry an 8-0 advantage into the break when Nathan Taylor crossed.

Stortford hit back following the restart and led by two points as Gary Kingham powered over before Brad Burr added the extras and kicked a penalty.

A second Barton penalty moved the hosts back in front and Cinderford’s win was ultimately secured when Harry Hone dotted down in the closing stages.

However, in true Stortford fashion this season, they did leave Gloucestershire with a bonus-point as Burr landed a late penalty.