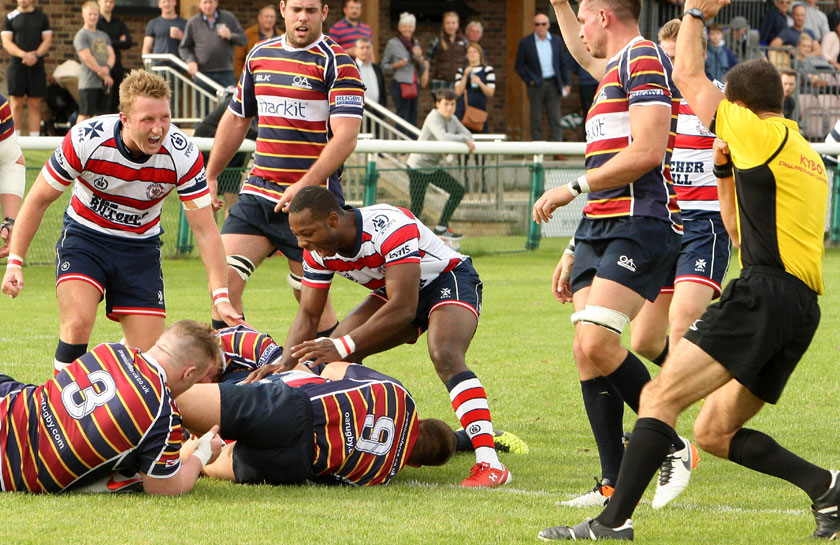 Rosslyn Park and Coventry were ruthless on the opening weekend as Bishop’s Stortford began their life in National One with a win.

For Rosslyn Park and Coventry, they may be happy to stay under the radar this year.

The teams that finished in sixth and fourth last term will certainly be aiming for successful campaigns, but if they continue to perform the way they did on the opening day of the new season, then they will most definitely turn heads turn.

Old Albanian and Hull Ionians were their victims as the pair began 2017/18 on a high note running in 18 tries between them. By all accounts, the scorelines in both games don’t flatter Park or Cov who outclassed their opposition.

Another side that purred on the opening weekend were newly promoted Bishop’s Stortford. They played an attractive brand rugby on their way to the National Two South title last season and they aren’t about to change their style. A win over a side that lost just twice last year is not a bad start at all.

Elsewhere, Esher and Darlington Mowden Park both secured home victories while James Shanahan got his tenure at Blackheath off to an impressive start. Also, Cambridge came away from Fylde with a victory and two of last season’s top teams – Birmingham Moseley and Ampthill & District shared the spoils.

Kieran Power began his reign at Rosslyn Park in the best possible manner as his side cruised to victory over Old Albanian at Woolams.

OAs, who are now under the stewardship of Gavin Hogg, were 32-0 down at half-time after Park ran in five tries.

The men from the Rock continued to be rampant after the break as they scored on four more occasions to complete a comfortable win.

Coventry ran in nine tries to inflict a heavy defeat on Hull Ionians at Brantingham Park.

Cov, who finished fourth last season and ended the campaign on an eight game unbeaten run, had seven debutants in their side but Rowland Winter’s men had no problem gaining the victory.

The side from the Butts Park Arena, who had been 25-20 up at half-time, ran riot in the second half as Hull Ionians’ defence fell apart.

Will Maisey starred at fly-half, while Jack Preece scored a brace.

The I’s scores came from Ed Falkingham while Isacc Green added the extras.

Esher got their National One campaign off to the perfect start with a bonus-point win over Old Elthamians at Molesey Road.

Dom Lespierre crossed early on for OEs but Paul Roberts, Niall Saunders and Kariym Irving all went over to establish a 17-7 lead for Esher at the break.

Ollie Claxon brought the newly promoted visitors right back into the contest just after the hour, however two quick fire tries from Andy Garner and Spencer Sutherland wrapped up the win for the Surrey-based side.

Bishop’s Stortford began life in National One with a crushing win over fellow newly promoted side Caldy at Silver Leys.

The visitors had early success thanks to a try from Gareth Roberts, but scores from Matt Tomlinson, Matt Riddington and Tom Banks put Stortford 30-14 ahead at the break.

Jack Beavers had crossed for Caldy in the first period, but his side continued to chase the game after half-time as tries from Will Roberts, Jon George and George Cullen, the later kicking superbly to finish with a 24-point haul.

Darlington Mowden Park got off to a winning start in National One with a thrilling victory over Loughborough Students.

The hosts led 19-10 at half-time thanks to a double from Warren Seals and one via Ollie Hodgson, while Owen Waters kicked a penalty for the away side before Cameron Dobinson crossed on the interval.

Waters added another penalty after the break, but the hosts hit back quickly through Grant Connon.

Ben Frankland’s score ultimately sealed the win for DMP four minutes from time, but Loughborough left the north-east with a losing bonus point as Tom Stapley and Tim Bitirim dotted down late on.

The visitors extended their lead shortly after the interval as Dan Collier scored the bonus-point try, but Blackheath found a way back into the contest when they were awarded a penalty try.

Both sides then exchanged two penalties apiece before Tarrant kept his cool to slot over a late kick to snatch the win.

Cambridge kicked off the new National One season with a hard-fought victory over Fylde.

Tom Burtonwood crashed over for the hosts to give them the lead at Woodlands, but Rob Conquest as well as a penalty from Ben Penfold put the visitors ahead.

The Blood and Sand extended their lead after half-time as Joe Green scored a wonderful length of the field try, but a Fylde penalty try and a yellow card to Cameron Keenan brought Warren Spragg’s men right back into the contest.

Fylde then exerted pressure on the Cambridge defence, but Ross Stewart’s men stood firm and were rewarded for their resilience as Mike Ayrton wrapped up the win with a late try.

Five points via the boot of Rayner and a try from Syd Blackmore gave the A’s a 10-7 half-time lead, despite Ben Howard putting Moseley in front.

Chris Brightwell put the hosts ahead after the restart and the men from Billesley Common had a cushion when Jacques Le Roux smashed his way over to give them a 21-10 lead.

However, Rayner slotted over a penalty before Sam Hanks gave Ampthill a fighting chance when he crossed on 74 minutes.

Ampthill had one last attack in them and their endeavour led to a penalty two minutes from time which Rayner pinged over to rescue a draw for the Bedfordshire outfit.